How to find out the Major and Minor chords of a scale?

How do I know which notes of a scale may be a Major/Minor chord?

Take this question as an example. The OP states that the C major scale contains the following chords: C, Dm, Em, F, G, Am, Bdim

How do I accomplish this?

What OP means is that if you use the notes of that scale (no sharps or flats added or removed) and play a third and a fifth on each note you get those chords.

This comes from walking up the scale and taking triplets of notes which are spaced every other note: CEG, DFA, EGB, ... These are called "triads". 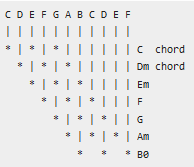 The majors and minors have a perfect fifth above their root note, for instance the Am chord's A-E interval.

The seventh degree chord, B, is diminished: it has a minor third (B-D) and a diminished fifth (B-F).

You can transpose this pattern into any key.

In the major scale, the first and fourth degrees are major. The fifth degree is dominant (major 3rd but minor 7th). The second, third and sixth degrees are minor, and the seventh degree is a minor with a diminished fifth (also known as minor 7th flat 5 or something like that, I'm not too good with chord names in English).

So for example in the C major scale: C and F are major, G is dominant, D, E and A are minor, and B is the one with the diminished fifth.

This may have already been answered, but I'll throw in my grain of salt. If you remember, every triad is made up of 3 tones. The root, the third, and the fifth. If you play a C on your piano, then play one third up, and then play a third above that, you have a C major chord, because C-E is an M3.

Continue and you get an m3 in D-F,

The reason that vii is diminished is because b-d-f is TWO m3s stacked on each other. This works in EVERY major scale. M is Major, and m is minor.

6
Finding out which scales contain a specific chord
2
How to know which chord shape to use for each root note in the scale?
0
Could you have a minor chord in a Major scale song?

6
Finding out which scales contain a specific chord
4
How can I know which major and minor chords go in a scale?
4
Chord construction using the minor scale
1
How to quickly figure out the chords in a major scale?
4
E major and A minor together are not in scale?
7
Confusion about blues scale and chords
1
How to choose the major, minor, diminished chords, etc. along the chord progression
0
Can you use both diatonic major and minor scale with any mode?