I found another post on here that helped me understand parts of the timing for this prelude. For example, in certain measures, like mm. 1 and 3, the quavers are to be treated as "triplets" or can be counted in 12/8 time.

My immense confusion starts in Measure 5. A post I saw mentioned that the quaver-semiquaver figure in the left hand coincides with the third quaver from the quaver "triplet" (marked in the red boxes). It also looks like within the first semiquaver-quaver group, the semiquaver in the dotted quaver-semiquaver figure falls with the 3rd and 4th semiquavers that open the bar (marked in the blue boxes). I'm really not sure how the math works out here. This confusing pattern repeats throughout the prelude and I'm so lost.

Regardless of whether we treat the dotted quaver-semiquaver figure as triplets or as written in 2/2 time, should the semiquaver in the left hand be played after the third quaver from the quaver "triplet" in the right hand? Am I missing something or not understanding something here? Would appreciate any help!! 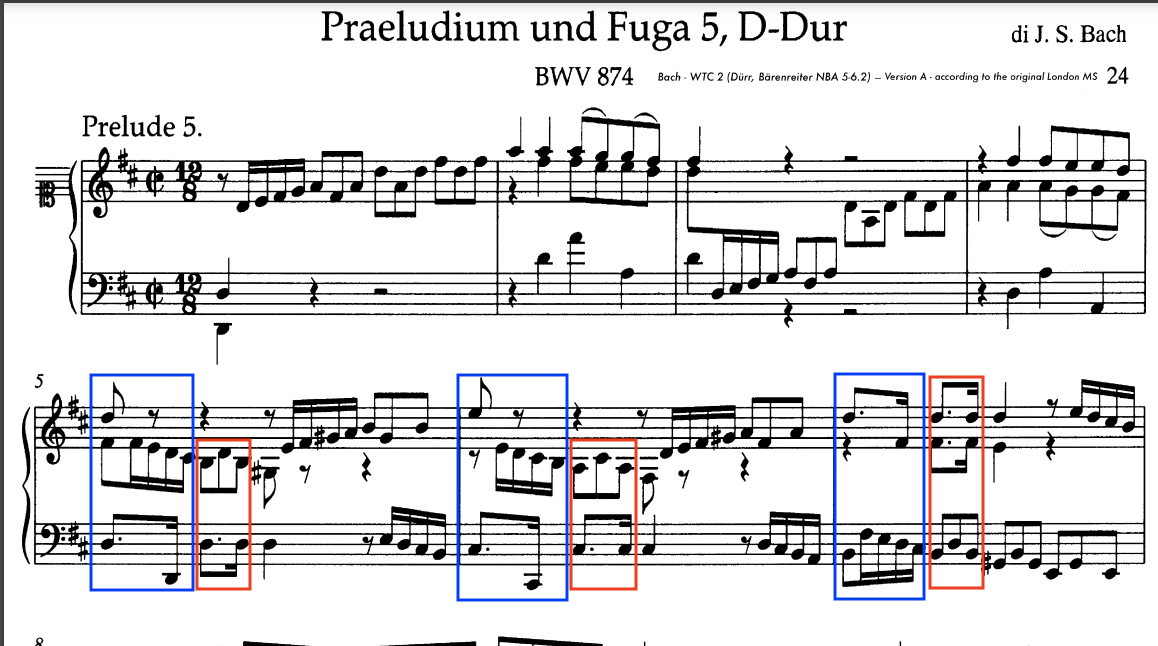 In Bach, it is common that partial triplet figures are written as dotted figures. In this case, the marked figures should be played such that the dotted notes receives the first two parts of the triplet, and the semiquaver receives the third part of the triplet.

Bärenreiter's Urtext edition explains, specifically with regard to this Prelude, but also indicates where there is room for scholarly research and debate:

Another problem is the rhythmic placement of dotted notes of the sort we find, in WTC II, mainly in the Prelude in D major, [and] the Fugue in E minor.... In the first instance..., Bach grants himself a certain license by employing a double time signature. We therefore decided, in our new edition, to make all dotted figures occurring in a triplet context (bar 5, bass, etc.) conform with the triplets as if Bach has written [crotchet - quaver], hoping thereby to do justice to his intentions....

Now it so happens that we possess a document in which one of Bach's pupils, Johann Friedrich Agricola (1720 – 1774), expressed his views on this subject. He writes as follows...: "This [adaptation] is only correct at extremely fast tempos. Except in such cases, the note following the dot must not be made to coincide with the final note of the triple, but should instead be struck after that note. This practice was taught by J. S. Bach to all of his pupils".

Although it is not our wish to deter anyone from proceeding in this fashion, a number of reservations may be raised against Agricola's testimony. For example, Bach may have changed his mind on this point in his later years and the pieces in question may have originated at an earlier date. Or it may merely represent an admission on Bach's part as to how he ought to have notated those pieces.

The general practice can be confirmed with most any recording by a prominent performer. Andras Schiff, for example, is considered a Bach authority and plays the dotted figures in triplet rhythm.

Not the answer you're looking for? Browse other questions tagged theory piano rhythm time-signatures or ask your own question.

14
Triplets against twos in Bach's music

15
What's the best method for learning how to play triplets over quavers?
4
What would be a good method to learn a new piano piece?
6
Handling of dotted eighth rests when a "swing rule" is in place, and whether physical note position has effect on it
4
Bach prelude BWV 924
7
How to clearly notate tuplets, both "simple" and "complex," in irregular meters
8
History of triplets
4
Piano: quaver triplets in RH v dotted quaver and semiquaver in LH
5
Playing a trill with grace note ending
11
How Do I Count Note Durations In These Bars?
3
Bach's Toccata is a bit confusing, how am I supposed to play this?