I have heard recordings of Beethoven's C sharp minor string quartet Op. 131 where, in bar 53 the third crotchet of the first violin part is played as E flat, and at least one recording where it is played as E natural. The E flat (or D sharp), combined with the other parts would give the chord B major, while the E natural would give a B suspended 4th, if I'm not mistaken.

(The "E natural" recording I have in mind is by the Taneyev Quartet of Leningrad dated 1988, and is on an LP on the мелодиа (Melodia) label.)

Given the tempo and the prominence of this particular note, it seems highly unlikely to be a `bum note' on the part of the player.

Are there different editions of the score that would account for this? Is there any consensus as to which was Beethoven's true intention?

EDIT: Using the links kindly provided by Carl below, I found one possible source of the E natural, namely the 1863 Breikopf and Haertel edition. Here it appears with the accidental immediately preceding the note. In other editions (including at least one older edition) there is no such accidental, so following the key signature the note is E flat.

So the answer to my first question above is yes. But what is the source of the Breikopf and Haertel natural sign? And which is the composer's likely intention? 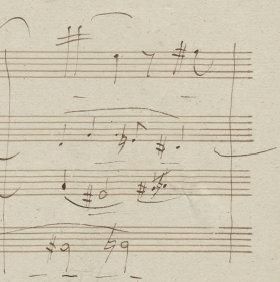 My guess is that the natural in the Breitkopf & Härtel score is either a simple mistake or a hypercorrection; either way it was likely influenced by the E natural in the second violin part.

Something tell me it's linked to Chinese Whispers. In the same way a story is reworded by whoever tells it to their convenience, a script is reworked according to the tastes of who's going to perform it.

The difference of a semitone is strangely noticeable in any music, and makes a difference to how to it sounds. The composer's true intention we will likely never know, but where there is a difference in two scores, you can be fairly sure it was just one little tweak from an orchestra to make a piece sound better (I say better as in, better-sounding to them).

If you had to throw a guess on the composer's likely intention, it is likely to be the least... pleasant sounding note. (I say that very loosely). If one note happily matches a chord and one does not, the former is likely to be the edit. Then again, some tweaks makes pieces sound much harsher.

Not the answer you're looking for? Browse other questions tagged classical-music musicology beethoven or ask your own question.

8
Beethoven repeated sforzando
3
Modulating from A-flat major to C major (Beethoven)
1
Beethoven Kreutzer string quintet
5
Pros and cons of Urtext edition
17
Why did Beethoven include "in the Lydian Mode" in the title of String Quartet, Op.132 - 3?
3
1 to Flat-6 to 1 chord progression - Is this a Beethoven thing?
4
Anotations in Beethoven original score of the 9th symphony
6
Ludwig van Beethoven "complete" 722 works in Chronological Order
15
Beethoven Piano Concerto No. 3: Last notes played by piano or not?