How are beats divided in simple/compound/odd meters supposed to sound different?

This is a question somewhat difficult to explain, in music theory it is said that simple, compound and odd meters subdivide into beats that are grouped into 2s for simple, 3s for compound and 2s 3s or 3s 2s for odds.

However, how are these beats given emphasis if they have no marking that gives them their accent?

I made a image illustrating my point: 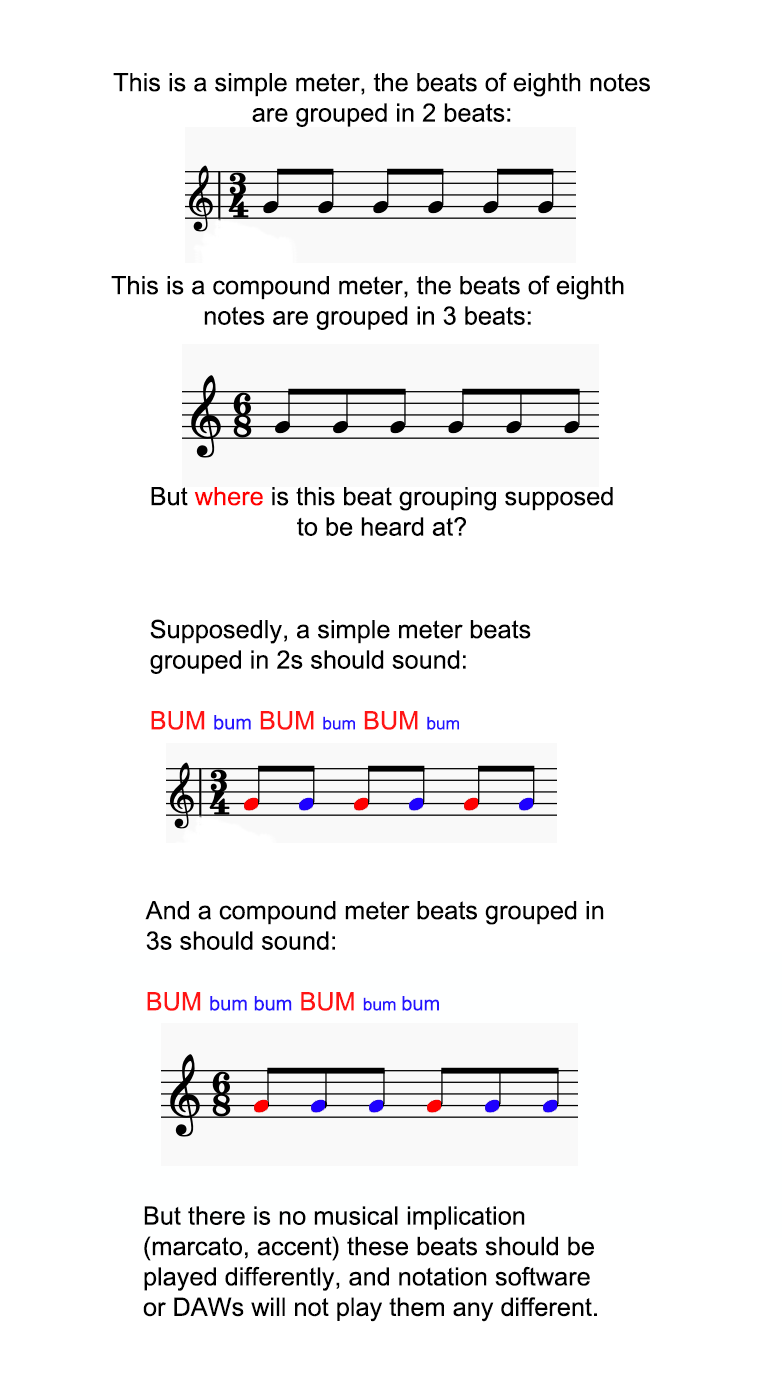 If i try a DAW or a music notation sofware, the 2 meters are played exactly the same, since there is nothing saying there is a beat there:

A simple duple sounds the same as a compound duple.

Then, to what exactly does the theory refers when it says that a simple duple meter and a compound duple are grouped in different amount of beats that make them sound differently?

Is it implied a human player would give them some kind of emphasis or dynamic to these beat arrangements that DAW or notation cannot recognize?

I am quite a beginner in music theory, so explanations in simple terms would be greatly appreciated.

The underlying principle at work here is: Notated music "doesn't show everything."

Compare, say, the sheet music of the Moonlight Sonata to a midi file capturing a performance of it.* The midi file records the exact velocity with which each key was pressed, how long it was held, and the exact timing from note to note. As the performer emphasizes certain notes expressively, or delays them, or quickens the pace slightly, all these details are recorded. Traditional staff notation doesn't document this level of detail—and that's kind of a good thing. For one thing, it would be tremendously confusing to read, and for another, it would leave no room for personal "interpretation." Every performance would be the same. So every human performance contains infinite data points of "interpretive" decisions to emphasize or de-emphasize certain notes, to modulate their attack or release in certain ways, or to manipulate the timing intentionally, and most composers are happy to leave this granularity of detail up to the performer.

The concept of metric emphasis is one of these. It's also complicated by the fact that it's an abstract concept. In an actual musical phrase, other factors might influence emphasis, perhaps even in ways that contradict the meter (minuets, mazurkas, ländlers, and even basic rock-and-roll can feature heavy emphases on what are supposed to be "weak" beats).

But the idea is: Yes, the first note, the downbeat, is almost always thought of as emphasized. In practice it will often get some emphasis as well, though of course you could imagine "overdoing it." (And "overdoing it" will look different in different contexts—oom-pah bands or disco are built on heavy metric emphasis, but other genres might lighten up.)

Now what about DAWs, or metronomes, or other robots? What about a human performance of a piece like Steve Reich's Clapping Music that aspires to make every note equal in emphasis?

At that point we run into the fact that meter is a concept. Yes, most of the time it will also affect the human-produced sound, but even when it doesn't, it may be superimposed on the actual sound. You can turn on a metronome and set it to 240. You may then think of that series of undifferentiated pulses as quarter notes (in 3/4, 4/4, or any other number of beats, imagining an emphasis on a downbeat. Or you can think of the metronome's sounds as representing eighth notes with a quarter-note speed of 120, or triplets at 40, etc. You can perform a piece with subtle, limited metric emphasis, but still make the meter much more important in your mind.

* Disclaimer, there's a lot I don't know about MIDI. Just making an analogy.

Your illustrations of 3/4 and 6/8 meter and beats are right.

Depending on your DAW it may have a metronome feature, and that metronome may have the specific feature of different "dings" for the beat and subdivisions. Some metronomes even ding differently on beats 1 and 3 in 4/4 meter. Those different dings would help you hear the meter.

Beyond the metronome there actually isn't a reason for the DAW to do anything audible to differentiate beats in differing meters, because meter is very conceptual. The notion that beats are accented is not necessarily expressed in terms of volume/dynamics.

In actuality rhythm, with at least some kind of mixed note durations, or harmonic rhythm, the rate at which chords change, are the common ways to hear (to accent) beats and meter. For example, half note followed by two quarter notes becomes audible as duple meter, half note followed by one quarter becomes audible triple meter. Chord changes tend to coincide with beats and the bar line, and that can provide metrical clues. Of course a lot depends on the particular details.

If your examples are taken literally, steady eighth notes, with no dynamic accent, and no change in pitch, basically assume everything is steady and without contrast (like no timbral changes, etc.), and there will be no audible way to place those notes in a meter. You might even say such a musical gesture is non-metrical.

Then, to what exactly does the theory refers when it says that a simple duple meter and a compound duple are grouped in different amount of beats that make them sound differently?

What theory says is the beats are accented compared to unaccented beat subdivisions, and those accents will create groupings which determine meter. The accenting scheme is first just a concept. We can discuss and understand the idea of a meter like 6/8 without actually hearing anything. The meter becomes perceptible in actual sound through various accenting methods like rhythm and dynamics.

I understand the BUM in capitals to be a dynamic accent, played more loudly than bum. This certainly is way to perform metered music, but keep in mind that there are lots and lots of performance examples where it is not so simplistic. As I stated above, other factors contribute to the sense of meter. A DAW should not necessarily play notes on the beat with a dynamic accent. IMO it should not do anything dynamically unless you notate it to do so. It's tedious to add all the little changes to add a human quality to a DAW playback, but assuming the type of DAW we're talking about is a notation program, its first purpose is creating a score, not a simulated human performance.

You can try to differentiate the rhythm by accentuating, velocity and phrasing:

In a waltz e.g. you can emphasize the first beat by playing it louder than 2,3 or more tenuto and 2,3 more staccato or a by slight syncopation: beat 2 is advanced to its exact metrum.

Yes, there is a natural emphasis on strong parts of the beats. When you emphasize weak parts of beats then you are syncopating a rhythm. 3/4 six quavers are grouped together your example has incorrect grouping. 6/8 is not divided into three a dotted crotchet can be divided into any number of notes really. I don't really understand your example. A beat in compound time can just as easily comprise of two or four notes than three.

After the many good answers, I would like to add the term agogic, which is used to describe actions taken to accent music in a way that distinguishes the actual timing from what is notated.

The German Wikipedia describes it as follows:[1]

The teaching of such free tempo changes is called agogics after Hugo Riemann. Riemann introduced the term into musical language in 1884. The changes are outside the mechanical tempo values (metronome) and are part of the musical interpretation by the conductor or soloist. This applies above all to the finest tempo nuances within musical phrases at melodic or harmonic climaxes, which expressively structure and enliven the performance. Thus, large interval leaps may take a little more time than smaller steps, and harmonic leads or the first note of a two-note tie are often stretched a little (cf. rubato).

Not the answer you're looking for? Browse other questions tagged time-signatures beats meter or ask your own question.

5
How do time signatures relay information on the grouping of beats?
1
What's this Time Signature if not 4/4?
2
What is the difference between grouped and separated quarter notes
3
Confused with Time Signature
0
Can we use any note without caring much on rule of particular meter as long as note value fits in the meter?
6
9/8 hybrid vs compound time
9
Why is meter divided into simple and compound types?
6
How does 'meter' differ from 'rhythm' in music?
6
Is 5/4 simple or compound?
8
Why is 3/4 called "simple triple" if we can divided the beats by more than 2?