Notes not adding up to time signature How to play this? 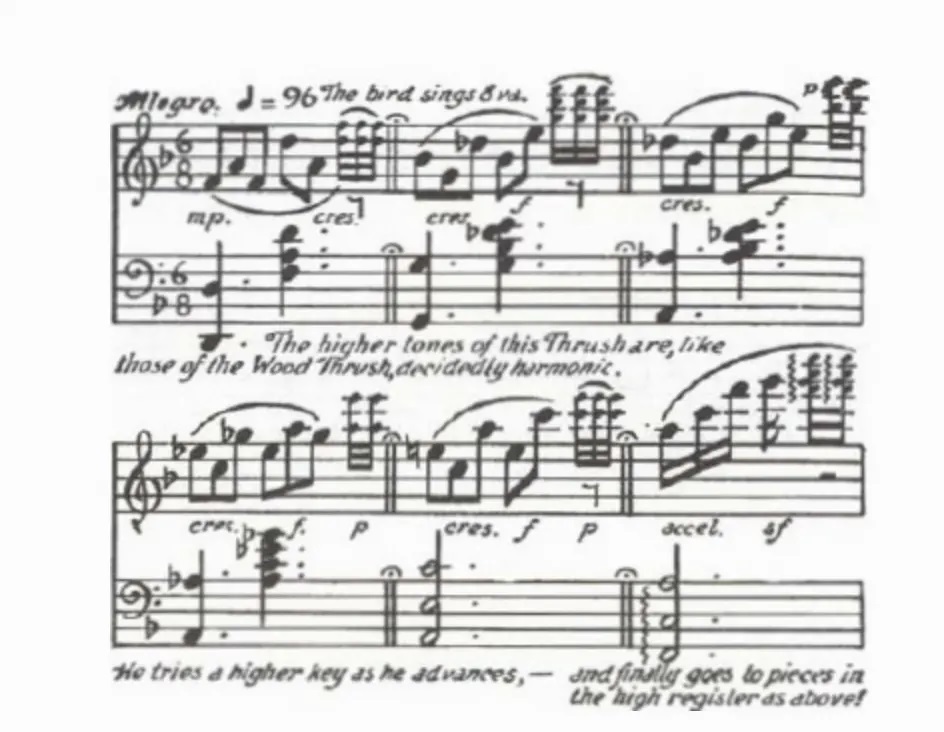 Hi, any idea how to play this piece? The note on the last beats are not adding up to 6/8. 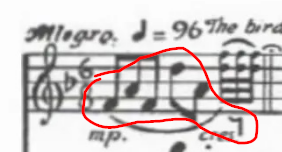 ...there are 5 eighth notes and 1 eighth rest = 6 eighths. The 32nd notes are grace notes and don't apply to the basic rhythm of the bar. 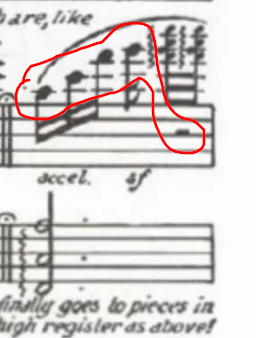 F. Schuyler Mathews, Field Book of Widl Birds and Their Music, p. 254 is the original source.

It has a lengthy introduction about birds and music and notation, including particular details about rhythm. Mathews seems to believe birds have some sort of sense of meter and beat, but points out other researchers do not. Mathews gives an example of rhythm for the Peabody Bird, that it is not strict eighth notes in 6/8, but "probably more accurately a dotted rhythm in 6/8. Notice that he allows for a bit a approximation in notating rhythm. Later he says...

The fact is, no matter how doubtfully complete the song of the little bird proves to be, there is no question whatever about the singe keeping time! He can not sustain a melody of any considerable length, nor can he conform to our conventional ideas of metre, but he can keep time perfectly, and a knowledge of his rhythmic method, is, I believe, the strongest factor in his identification by the ear!

Personally, I interpret that to mean bird sing with a consistent rhythm, and that rhythmic consistency will aid in identification of birds by their songs, but those rhythms may not be exactly as notated, or not mechanically (in the sense of a metronome) perfect. Bird songs are about one bar in length. Don't be too concerned about performing the rhythms exactly. You wouldn't conduct these with a white baton!

...any idea how to play this piece?

Well... Schuyler compares the bird song to Beethoven's Moonlight Sonata, and then says:

"...Like all the northern Thrushes, he is a transcendentalist, who is never satisfied with a creditable effort, but must try for something better and then "goes to pieces" in the attempt!"

I guess you have about 20 seconds to go full transcendental and push yourself until full collapse. But on the serious side, I think the grace notes are not graces in the normal sense of leading into a main rhythm note, but instead are a kind of punctuation ending the utterance. I can't really tell if it's meant to represent overtone singing or some kind of shake or tremolo. Probably either would be find. Keep in mind, you're never going to perfectly reproduce the sound on a piano. I think you have some leeway.

As it turns out, F. Schuyler Mathews, Field Book of Wild Birds and Their Music is the original source, and its Page 241 details this for additional playback instructions: 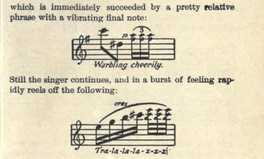 Note how the tiny notes are characterized as "a vibrating final note".

Those last, tiny notes are meant to be insignificant, but still spiritedly played, grace notes that do not count towards the meter.

The large noteheads (and rests!) do add up. The small noteheads are written as gracenotes and are to be played at indicated duration leading to the next large note head.

Take the first bar: 5 8th notes, followed by an 8th rest (which is easily overlooked). That’s a perfect 6/8. The three 32th notes are to begin after one 32th into that rest, as to end right at the end of the bar.

Addition: gracenotes are usually written in the same bar as the note they lead to. But it is not uncommon that they are placed left of the barline, like in this score. However, what is somewhat unorthodox (Thank you, Aaron, for pointing it out to me) is to combine it with the fermates over the barlines. Where normaly gracenotes ‘stick’ to the next note, this is a strong visual suggestion that the fermate pause should fall between the gracenotes and the next note.

Based on reading the grace notes, fermatas and most importantly performance directions under the notes, I think it's supposed to sound like this bird.

As explained in other answers, the note durations add up, but because of the grace notes and fermata, it is not played with strict rhythm. Some composers have written pieces with no regular bar structure without any time signature at all.

Despite the tempo instruction and mm mark, this isn't strict metrical writing. Just 'fit them in'.

And it's not a continuous piece of music. It's a collection of fragments. Play one, then stop. That's what the fermatas over barlines mean. The 'little notes' belong to and complete the preceding phrase. They aren't preparatory gracenotes belonging to the next one.

It would be interesting to know the source, though it makes no difference to the answer!

This sort of notation is not only found in birdsong imitations. Piano composers, particularly of the Romantic era, frequently wrote 'quasi cadenza' passages that made little attempt to 'add up'. We must use our own sense of style to decide how far the underlying pulse should be stretched to accommodate them. The mark of a great performer can be how they apply rubato while still maintaining a solid pulse.

Not the answer you're looking for? Browse other questions tagged theory notation learning time-signatures classical-music or ask your own question.