Many times, I put ties in the middle of the bar: 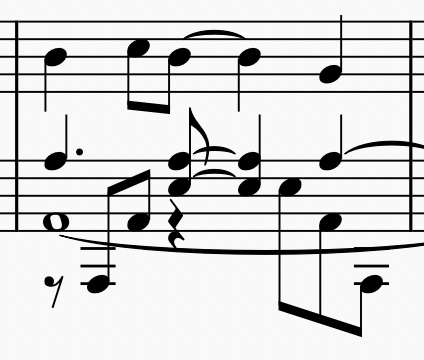 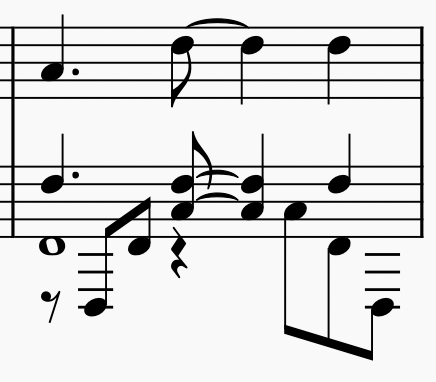 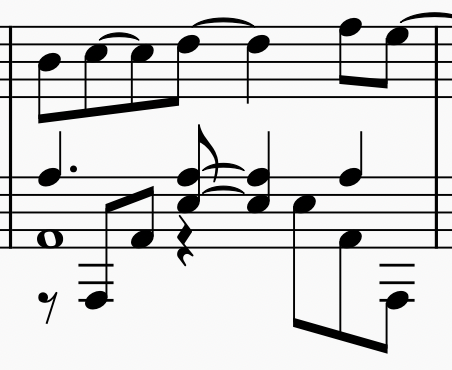 These ties are noisy; I'd like to remove them. But I placed them there in the belief that they're required for my 4/4 time signature.
Ties are used to allow the beat to be clearly seen / to create a metric grouping which shows the note's relationship with the stressed beats of the meter.

Could it be that my time signature is wrong? The "stressed beats" of the song are not "four crotchets", but a 3+3+2/8 additive meter. Let's try this new time signature: 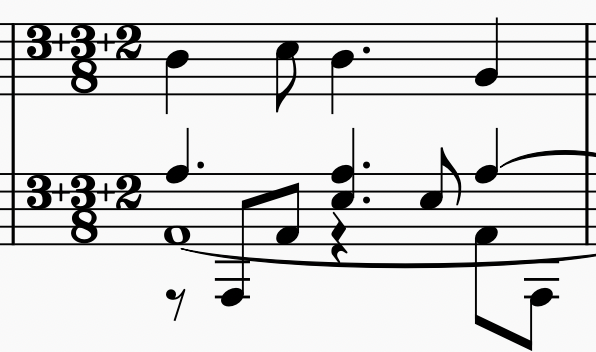 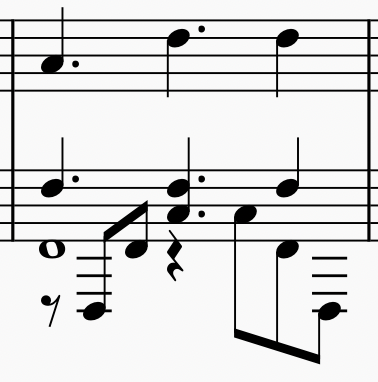 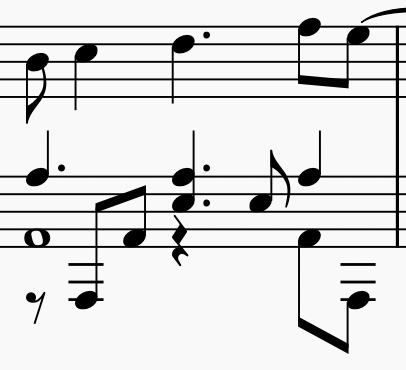 Is it reasonable to use a complex time signature like this (and to do so for the sake of eliminating ties)?
Is it correct that "if I use 4/4, I need ties to show where every crotchet begins" and "if I don't like those ties, I need a different time signature"?

One thing that makes this harder, is that frequently the treble employs a simple crotchet rhythm (against the complex meter in the bass): 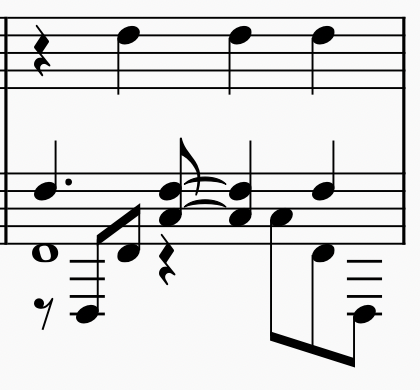 If I changed to a 3+3+2/8 time signature, the crotchet rhythm would need to be spelled with tied quavers. Is there a better solution?

Can I escape that constraint by using a triplet ("play 3 crotchets in the time of one dotted minim")? Because a dotted minim fits nicely onto the stressed beats of the bass rhythm, and because the use of a triplet explains the ratio via which we can feel the bass rhythm? 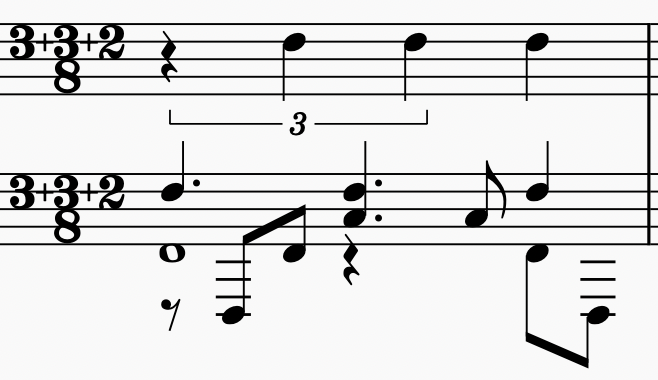 A local time signature could work, but maybe this doesn't help the reader understand the relationship with the bass rhythm? 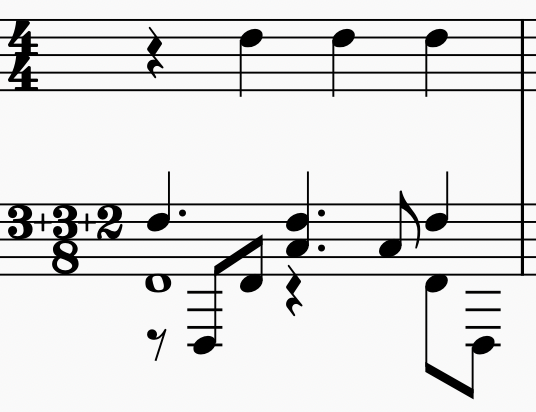 Mostly I'd like to understand engraving rules, and how to make this easier to perform.

Firstly, it would really help if you sort out what the various voices in the bass clef are doing, (this is where the "noise" is coming from). For piano it's not really possible to re-articulate a held note, (unless it's being held with a pedal, in which case it might be a good idea to indicate the pedalling).

Getting rid of the "impossible" notes and rearranging the voices for the first set of images gives the following:

This has removed most of the "noise", it's quite clear and probably best for this piece, because (as as already noted) the music really is in 4/4. This shows the ties across the middle of the bar (where they should be). If you think the quavers at the start of the ties need an accent, mark them with an accent. But don't confuse accent with beat.

Having said that, sometimes (a different piece of music perhaps) you will need an additive meter.

The time signature 8/8 is implicitly additive. 8/8 means 3+3+2/8, i.e. dotted-crotchet + dotted-crotchet + crotchet, (or sometimes 3+2+3/8 or 2+3+3/8). In this case don't feel required to write the time signature as explicitly additive (note groupings will make it clear). That is unless the meter is jumping around between the various permutations of 8/8 — even then it's often simpler to have some dotted "beat lines" marking the beats in the first bar.

Writing those bars in 8/8 (with the bass voices fixed) would look like this:

The triplet is quite wrong because three crotchets take the time of a dotted minim without the triplet. Using a triplet sign here is just confusing.

A polymeter (local time signatures) is sometimes called for, but not in this case, and I don't think a single piano player would appreciate trying to play in two time signatures at the same time, at all.

'Is it reasonable to use a complex time signature..? - No. That one works well for pieces that actually use complex timing. This one doesn't. It's firmly in 4/4, albeit with some syncopation. It's that syncopation that makes you think 'complex', but in essence, simple 4/4 will do the job. That being making life as simple as possible for any reader. After all, that's why it all gets written down, isn't it?

The point of ties across the centre of 4/4 bars is to show where those syncopations are, so they help readers . In fact, those first bars are better to read than the complex time sig. ones later. A reader will sense that feel in those bars anyway, and any 'noise' will be forgiven. Keep things as simple as possible, but within the 'rules'. And writing triplets will change the timing subtly, so won't be on the menu.

You can eliminate ties with additive meter, but your sheet music readers may prefer to see the more conventional meter and the ties that come along with it.

A music website I occasionally contribute to, NinSheetMusic, has repeatedly emphasized to me that there should be ties between Beats 2.5 and 3 in a 4/4 measure given that a note starts on Beat 2.5 and continues on to Beat 3, and that therefore your first example is correct and your second example is not preferred (except for the 1st set of tied 8th notes in the 3rd measure of your first example). (This is arguably notable because these are for transcriptions and fairly faithful arrangements of 20th-to-21st-century music, nearly all of which is not classical, and the updaters will perpetually hold off on publishing my transcription until their demands are met.)

Your last example with different time signatures in each staff is strongly discouraged unless each hand uses different tuplets (I've seem compound meter in one staff and simple meter in the other staff by far the most often in public-domain sheet music).

Not the answer you're looking for? Browse other questions tagged time-signatures engraving meter ties or ask your own question.

1
Identifying meter on double bass drum
5
How do time signatures relay information on the grouping of beats?
0
Can we use any note without caring much on rule of particular meter as long as note value fits in the meter?
6
How does 'meter' differ from 'rhythm' in music?
2
What is the name of the practice of rhythm being written as series of 2's and 3's?
6
Is 5/4 simple or compound?
22
I don't understand the bottom number in a time signature
8
Gnossiennes and Free Time