I am writing a part for strings and I want a rapid (but not instant) diminuendo across one bar from forte to total silence by the end of the fourth beat. I had four possibilities in mind for conveying this to the players:

Which would be the best way of conveying what I want?

The amount of annotation you can put in does of course depend on how much horizontal space you have in this bar (this can drastically limit the amount of ps you might put there). Writing molto dim would probably not express what you want, as you want to specify an al niente, the same would hold for a hairpin with text molto. 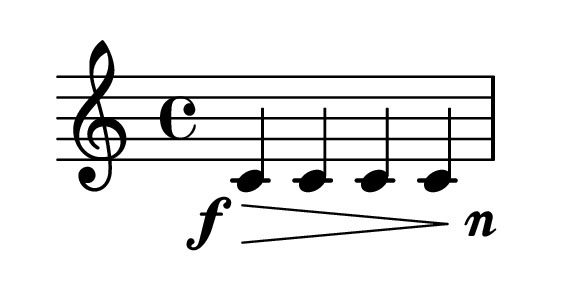 By increasing the height of the hairpin we signify a strong diminuendo. By specifying n in the end we signify a diminuendo al niente, and by specifying a f in the beginning of the measure we make sure that we go from forte to niente, to avoid potential too early diminuendo.

The Italian word 'niente' is usually used for 'nothing'. So you write "al niente" or "𝆓n". "𝆓ø" is often used instead of "𝆓n".
According to Elaine Gould's book "Behind Bars" another notation is a small circle attached to the the end of the diminuendo, but I don't think I've ever seen that in practice.

"ppp" (piano pianissimo) is not "silence", only somewhat close to it. I would go with #3 - if you want silence, then say so.

If you really want silence at the end, then the last beat should be a dotted eighth followed by a small rest. In addition, as a string player, I would need more specific instructions for the articulated quarter notes. By the way, why are they articulated? Because it's slow, and I would run out of bow if it were one long (tied) note?

In short, each quarter note should have a starting and ending dynamic indicated, with an individual decrescendo. Otherwise, the performer might give you a terraced effect.

Note that unless the performer knows you really want a note to fade to nothing, then even a triple p will be interpreted as needing to be audible to the audience. (Composers' dynamic markings tend to be interpreted as intentions more than actual reality.)

But let's say you decide you don't need the articulation and you decide to go with a dotted half tied to a dotted eighth followed by a tiny rest. We kind of need to know what comes next so we can recommend appropriate bowing.

4
Clementi Op. 42 Lesson 5 Arietta (ABRSM Grade 1, A1), use of crescendo and diminuendo
5
Key choice for brass instruments
0
How to express exhaustion without rallentando or diminuendo?
1
"arranged by ____" v.s. "notation by _____" - what did the notation person do?
0
Should I focus on the notes of the song and less on the rhythmic notation when learning a new song?
1
Enhancing the effect of Crescendo/Diminuendo in musescore
5
Is there a difference between 'decrescendo' and 'diminuendo'?