What are these playing instructions for classical guitar? 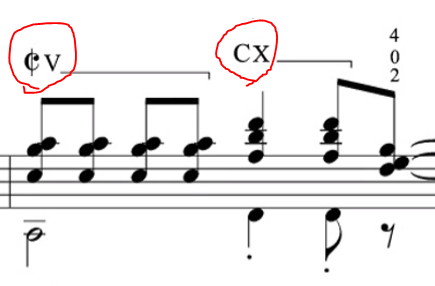 The source can be found here:

What are these and how do I read them?

They're fret numbers. Sometimes they refer to that fret barred, sometimes (as in the sign lke cut time) they refer to a part barre. The lowest notes are usually best left played as open, although here, CV refers to fret 5, so the low A could be played on 6th string, fret 5 - BUT - since it's a half barre, it indicates play it open. The D, on the other hand (sic) might be better played fretted at 10, as indicated, making the staccato easier to perform.

The C with a slash through means a half-barre of some sort 2 - 5 strings as the harmony dictates.

The straight C probably indicates a full barre but the notation is awkward.

The position is indicated with Roman Numerals as is the tradition.

These are fret numbers, as @Tim already said, but they do not necessarily indicate full or partial barré. They indicate position. This sometimes does mean a barré, sometimes it indicates just the playing position on the fretboard.

PS: as requested in the comment: the position is indicated by a "C" followed by a roman numeral, i.e. "CIV" for fourth position or "CVII" for seventh position. It indicates the "root fret" for the hand position on the fretboard, which sometimes means to play a full or partial barré, sometimes it just indicates the finger position.

For instance: playing a am7 chord as A-x-g-c'-e'-x (5th fret, A-string and e-string muted)) would also be 5th position without any barré involved.

14
Small natural above C in G Major
9
Did J.S. Bach write the figured bass in scores or continuo parts?
15
Is the Baroque Schleifer, slide, or glissando symbol evolved from the Gregorian chant quilisma?
1
What Are the Correct Fingerings for Piano Chords (and Inversions)
8
Are there specific injury concerns I should watch out for with piano tremolo exercises?
8
Is the beaming of this score following a vocal practice or it is just outdated and obscuring the beat?
6
What do these notation marks mean?
2
Notating Sound Effects on a Score?
2
Where to repeat in this Jingle Bells score?
2
What are letters in parentheses (no chords)?