I thought I had a pretty good understanding of inversions, until I ran across this tutorial video where he plays the following "inversions"

I understand that these are close triad voicings. But I'm confused how they can be considered inversions? I can see the standard inversion shapes in the treble clef, but inversions are defined by the lowest note played...and in all these cases the lowest note played is the root note, leaving them all in Root Position. Are we allowed to occasionally ignore notes played when referring to Chord names? If so, when is this allowed?

I have an additional question - I have a confusion around ordering of notes and repeated notes. Do these ever impact how we name a Chord? For example... 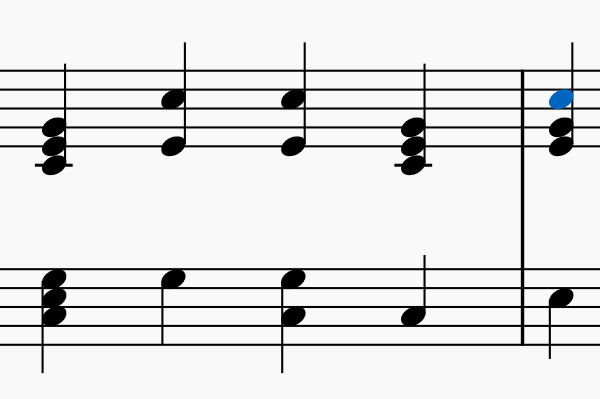 Despite notes being out of order and repeated, are all of these chords considered a Cmaj triad with either open or close voicings? In the first chord played, would you refer to that as playing 2 Cmaj triads in close position?

The chords in the examples are not inverted. You are right when you say that inversions are determined by the lowest note. If the chords in the treble clef where by themselves then they would be inverted.

In addition to @FelipeMartins's answer, chords are named according to the pitch-names they contain. Those pitches can be in any order and repeated (doubled) as often as desired. Thus, all of the voicings shown in the second image remain C major, distinguished by open/close position and by inversion, but all C major.

Perhaps the author of the tutorial meant to only refer to the triad the right hand is playing as the inversion.

For your additional question about naming, the inversion can impact the naming if you choose specify the inversion in the name, which you could do with figured bass, or slash chord notation, e.g. a first inversion C major triad could be notated C/E. Note that that doesn't tell you if the chord is E - G - C, or E - C - G.

13
Correct terminology for chord inversions
3
Chord inversions?
1
Fm7 Drop 2 1st inversion confusion
0
How does this drop 3 voicing work?
6
Inversions of chords in closed/open positions
4
How to characterize voicings of "cowboy chords" on guitar?
3
(How) Do the terms "open" and "close" position apply to chords with multiple doublings?
7
Em/C: Sound Notation, or Dirty Shorthand?
2
difficulty with chord spelling and voicing in Neumeyer's Hindemith analysis
1
Why is this a Gm7 chord?