How to hide a flat pick in the right hand when switching to finger picking, Warren Haynes style

Watch any Warren Haynes video on YouTube and you'll notice that he often likes to mix it up and play solos with a pick but mid-way switch to using his fingers.

Joe Bonamassa is another guy I see doing this a fair bit. A nice technique if you can get it to work!

Where do people think he is most likely holding the pick in the right hand when he has switched to finger picking?

I've tried putting the pick between the 4th and 3rd fingers, or using the pinky to hold it against my palm. I just can't find anything that feels comfortable, but still allows the other fingers to move freely in order to fingerpick, AND can easily transition the pick back to the fingers for playing.

Does anyone have any insights or tips on this technique?

Also, when he has switched to finger picking, it looks like the way he would use the right hand when playing slide guitar. I.e. mainly thumb and index finger.

guitar technique picking
Share
Improve this question
edited May 30, 2011 at 10:23

I know that Brian Setzer of the Stray Cats does this a lot too. He explains his approach ina video here; he forfeits the index finger, and uses it to hold the pick, curling it against his palm: 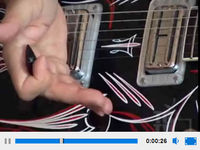 He then uses his thumb and remaining fingers for fingerstyle. The article says:

You may find it feels awkward playing fingerstlye without your first finger, but it shouldn't take much practice before this feel completely natural. If you really can't get used to it, then try tucking the pick under whichever finger you find easiest.

I can also recommend this DVD, where you can see him do it in some detail.

Since the 4th finger isn't usually used for picking, seems logical, that use can hold the pick between 3rd and 4th fingers, but this will require some tough training, because you will have to have some extra tension in your right hand witch is not good - the right hand must be relaxed as possible.

for me, I use two "techniques", if you can call the that:

Out a pick in my teeth. Not very hygienic, but very easy and it works (also some girls find it quite attractive :)

Use a pick holder glued to the body of a guitar - makes really easy to get rid of a pick fast. 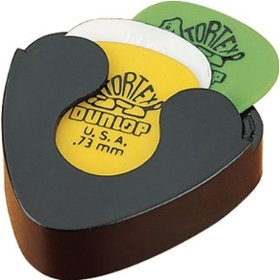 I picked this up before I could do anything really well. I hold the pick between the joints of my picking hand ring finger. This leaves the thumb, index and middle finger free to fingerpick.

Need to get some Metaltech branded picks so I can lob them into the audience though - I should have thought of that before!

I simply have an oval silver ring in my ring finger. I tuck it there and it sticks well, I sacrifice no fingers, and can go crazy with fingerpicking.

Well, I'm actually going to answer my own question.

I can do that, because I recently saw both Warren Haynes and Joe Bonamassa play. I was close enough that I could actually see for myself how they do it.

So even though I like this question to be quite general (in order to be helpful to others), to be honest, I actually just wanted to know how Warren Haynes does this ;)

And I can say that Warren actually puts the pick between his index and middle fingers, high up, so he can still move all of his fingers to some degree.

In that way, he is able to finger-pick with all of his fingers, and not sacrificing any particular finger. The trick seems to be though that you can't go crazy with the finger picking, or the pick is going to come loose.

As well, you have to really practice that transition of moving the pick from your normal grip, to holding it between your fingers, and vice versa. Warren does it smoothly, and without effort. He's obviously been doing this for decades. I think it's going to take me some time to get even close, but I'll keep trying.

The other benefit to Warren's technique, is that as a very good slide guitarist, Warren naturally has very well developed finger-picking technique with the thumb, index and middle fingers. (Warren's style of slide involves plucking and muting the strings with those fingers). So of course, it then makes sense to keep those fingers free when finger-picking with the plectrum tucked away, to make the most of that well-developed picking technique. I was thinking that when I originally wrote my question, and I can see that it is true.

I'm going to concentrate on Warren's technique however, because it is closer to what I'm hoping to achieve with my playing.

I do this a lot as I learnt electric guitar without a pick at first, then learnt to use a pick later. I end up alternating between the two a lot.

I have a few methods that I use : 1) Stick pick between teeth/lips - works on but there's a yuck factor (as others have mentioned) and it takes too long to do. Need it out of the way instantly really.

3) Tuck between 2nd and 3rd finger (assuming forefinger is 1st) quite high up near the knuckle. That means it can sit there while I noodle about and doesn't fall out as my fingers move. This is fine but not if I want to span several frets withg right hand (which I sometimes do).

I see you've answered the question anyway (thanks, really good info) but thought I'd mention some other techniques.

You can basically make any finger work. Really depends on what feels good to you and which fingers you primarily use while playing.

I go over a few different ways of doing it in this video I did.

Not the answer you're looking for? Browse other questions tagged guitar technique picking or ask your own question.

7
What's the right way to hold a pick?
10
What's the proper right arm position for an electric guitar?
7
Looking for a specific device to secure a pick to your hand

18
Right hand accuracy
3
Electric Guitar | Right hand position
6
Flatpicking: how can I make my floating-pick-hand less bouncy?
0
Finding a balance point learning to pick a guitar at a right angle?
9
Is there a "correct" position for the right hand when playing guitar?
5
How to improve right hand picking/strumming technique for electric and acoustic guitar?
4
Tremolo picking, anchor palm or not?
2
Combining fingerpicking with guitar pick
9
What's the reasoning behind discouraging the use of the pinky finger by some schools of finger-style guitar?
3
Muting string technique with right hand only