As shown in the attached image,

(i) What do the numbers written in the circles indicate?

(ii)What do the numbers above the beams/below the "arm" notation indicate?

I was thinking the numbers either mean which frets or which strings to play on, which are usually indicated using roman numerals. If not, could they be the fingerings? 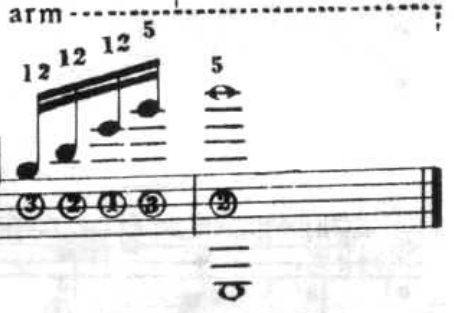 Since the harm (harmonics) for each note written refer to notes G B and E, the circled numbers tell which string each harmonic is played on. Tha numbers (12, etc.) are for the fretwire each string is touched over to play. Thus 1st note (G) 12th fret harmonic, 3rd string; 4th note (oct. G) again 3rd string, but 5th fret harmonic.

3
Numbers above notes in orchestral score
5
Lilypond finger placement brackets
3
What does two chords notated above one another mean?
5
What is this unfamiliar notation?
14
What's this rectangular notation symbol?
8
Why don't key signatures indicate the tonic?
10
Meaning of notation in violin part
4
B flat 6 arpeggio notation
5
Modern (Hollywood) score convention for Solo & Tutti
1
Is this the correct numeral for the given bass?