Why is MIDI gain based on a factor of 40?

I've found only one person asking why, with no replies. This document says that voltage (amplitude) gain is a factor of 20, not 40.

So why a factor of 40? What is the theory behind it? What is the nature of gain being addressed in the MIDI standard?

The answer will be important for me, because I am trying to match the volume of MIDI to an OPL4 device which has a logarithmic scale, and using the MIDI formula clearly gives an incorrect volume level for quiet notes. By comparing output produced by the MIDI formula, I clearly hear that Windows Media Player has higher volumes for quieter notes.

Linear volume boost does not help here, making the sound even uglier: making loud notes louder and not much affecting quiet notes.

thank you very much for the answers. It was somewhat hard to choose the best one. Therefore our conclusions are: simplicity in implementation (V * V * sample), covering broader dynamic range (96 dB instead of 48 dB).

My suspicion was actually about breaking the human perception of 20 * log having 40 * log, which has steeper curve. I replaced volume table 20 * log, and it now sounds very similar to other players I tried (including WMP).

Regarding questions asked: OPL4 is my own implementation, designed basing on YMF278B datasheet, therefore I have full access to its internals - here's the outcome of my work heavily using hardware acceleration playing more or less properly on the 3.58 MHz machine.

I suspect that at TL=127 chip must mute the output, however it is not declared in the datasheet, and my implementation does not make this assumption.

If total silence is required immediately, panpot=8 can be used until envelope reaches max 1023 under key off condition with appropriate RR=15.

OPL4 (YMF278B) contains OPL3 implementation, however slightly different than in OPL3 and earlier chips because of running at 49.515 instead of 49.715 kHz.

This definition of MIDI volume appears in the General MIDI Level 2 specification, on the bottom of PDF page 10 and top of PDF page 11 (printed pages 6 and 7):

Regarding the curve of volume change messages, the square of the value is proportional to the volume.

To simplify the math in my descriptions, I will use a relative MIDI volume from 0 to 1.

As a rough approximation of a relative "perceptual loudness" measure, I looked at the definition of a sone. In a grossly simplified terms:

I used these simplified definitions to create a "relative sones" value like this:

N is the relative perceptual loudness in "relative sones" from 0 to 1.

To see how relative MIDI volume V compares to relative perceptual loudness N, I plugged in the earlier definition of L in terms of V and solved for N: 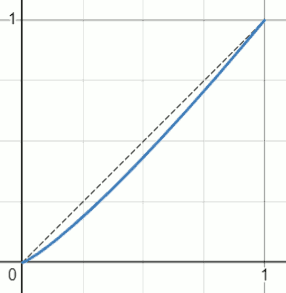 I don’t know the reason but a bit of math gives a reason.

First, a note: how a sound generator responds to a CC value is entirely up to the manufacturer or developer of the generator. What I found about CC7 is that the 40*log(CC7/127) formula is a suggestion. Also, this is not gain, it’s “volume”. What does volume mean in this context? Whatever the manufacturer or developer of the sound generator wants it to mean.

Of course the relationship inside the sound generator between the output value of the function and the gain (or attenuation) of the output amp can be made in any way. Also the characteristics of the amplifier are up in the air. That said, if the output of the function is used to set dB of attenuation, then a range of 84 dB is much more useful than 42 or less.

A factor could be chosen such that the output is -127 to 0, but in dB that is actually an overly broad range for output amp attenuation.

Why are we ignoring the input value of 0? Because the mathematical log of 0 is -infinity, which obviously will have to be handled specially in some way in and computer system applying this scaling function.

One way to handle it is to change the function to 40*log((CC7+1)/128), which outputs -84 to 0. Another way is to insert an if CC7==0 statement that catches the invalid input and can just set the output to 0. Other solutions exist.

Regarding the curve of volume change messages, the square of the value is proportional to the volume.

The squaring means that you get 40dB as the proportionality factor rather than 20dB.

MIDI volume is interpreted by multiplying sample values with the square of the controller value after normalisation. This is a 7-bit controller, and synthesis is typically done using 16-bit D/A converters. Squaring the value makes the multiplier 14 bits, covering the possible dynamic range pretty much completely while making for a simple implementation.

The formula is what results in terms of dB values and does not really reflect the simplicity of what actually happens in terms of implementation. That is somewhat similar to how a logarithmic potentiometer for volume control actually is done in practice, with "logarithmic" being not much more than a euphemism for "non-linear" inspired by the logarithmicity of loudness scales.

Not the answer you're looking for? Browse other questions tagged midi or ask your own question.