What is this chord? [closed]

Basic analysis questions, such as "What key is this song in?", are off-topic. Questions should be substantial and refer to a well-defined work or subsection, including a concrete reference (sheet music, etc.).

I just want to know what is that chord.

Then, What is it?

The presentation of the chord suggests that it is taken from the right hand part of a keyboard piece. If that is the case then one should not analyze the chord without taking the left hand into account. In classical music, particularly, it is common, even usual, to avoid playing the third of a chord in the upper voices when it appears in the bass part. Therefore, it's likely, especially if this is from a classical piece, that the left hand is playing an A (or perhaps A♭), in which case this chord would appear in a lead sheet as F7/A (or Fm7/A♭).

There's been some discussion in the comments about whether the chord is an augmented sixth chord. If that is the case then the upper note should (in classical theory) be spelled with a D♯ instead of an E♭. Lead sheets typically render these chords as dominant seventh chords, however (and jazz/pop theory explains them through "tritone substitution"). If the next chord is some sort of E chord (or an A chord with E in the bass) then the proper name of this chord depends on whether the piece is jazz or classical -- or, more precisely, on whether the analysis uses jazz or classical theory.

In the context of the video you link to, it's clear that the chord is Fm7. The absence of the A♭ can be explained by the texture, which is mostly two voices, bass and melody, with a good deal of arpeggiation. The right hand in particular frequently adds a voice to create a three-voice texture, which is what we have here but only very briefly. There are also spots where the right hand plays full chords.

But the whole introduction is basically a single voice in each hand with a few extra notes thrown in here and there to make explicit three-voice chords. These appear at certain structural points, mostly at the beginnings and ends of phrases.

Even without those extra notes, however, various chords are implied, sometimes by arpeggiation and sometimes with passing tones (for example, immediately after the C and E♭, with the left hand remaining on F, the right hand has A♭-E♭-A♭-B♭-C-E♭, which implies an Fm7 chord even without an actual chord; the B♭ is a passing tone).

Given the texture of the piece, one would not normally pay much attention to omitted notes when analyzing the harmony. The harmony is established by the melodic contour, so looking at the chords that appear almost in passing for a fraction of a beat is not necessarily helpful.

You're right. It's Fm7 with a note left out, just as the following F and A♭ are an Fm7 with two notes left out.

As an aside, while the section in question definitely has a minor feel to it, the piece begins with a melody that cadences on D♭ and also ends on D♭, so I would be inclined to say that it is in D♭ major rather than B♭ minor.

Well, the chord is simply what it is. It might serve some functions and be classified in certain harmonic systems, but that is quite arbitrary and would depend on the context. For example in classic harmonic theory this could be seen as F7 without 3 (depending on the context this could be read as Fm7, F7 or an open F chord with a 7th). But it could also be read as C minor over an F in the bass. All of this strongly depends on the context.

The 'official' title would be F7(no3). Which is just what it is.

This kind of identifying question is supposed to be off topic, but...

With no other info, you should call it an incomplete F seventh chord. There is no point it worrying whether it might be F7 or Fm7. With no other music given there is nothing much to say about harmony or any other analysis. I don't mean to put to fine a point on it, but those three tone only is nearly musically meaningless.

The obvious thing would be look around in any surrounding music and look to see if there is an A of some kind which could imply what the third of the F seventh chord could be. But you could imply that A without actually playing it... 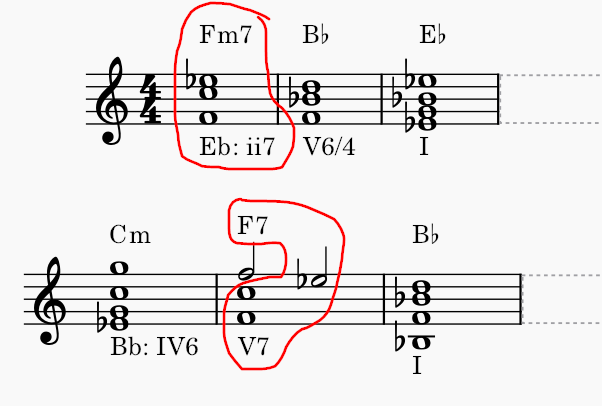 ...the two examples above do not use any A notes, but based on the context of the other chords a key can be established and by extension the A could be implied. In Eb major the A would be an Ab and the chord becomes an incomplete, implied Fm7. In Bb major the A would be A natural and the chord becomes and incomplete, implied F7 chord.

1
What chord is this?
5
What is this chord (spelled 2nd, 4th, 5th) and how is it used?
5
What chord is this and when is it the dominant?
6
What is the proper way to play this chord?
8
What is this chord called that looks similar to power chords?
2
Is this a C chord or an Em chord?
1
How do I choose the type of chord for an specific scale?
2
Is there a common name for this common chord progression
1
What is the chord consisting of G F# A D?
3
What kind of modulation is this?