Should I continue my classical study (avoiding parallel 5ths and octaves)

I just want to make pop tunes but I do take my hobbie seriously. Do the Beatles, Led Zeppelin, Rolling Stones, Stevie wonder avoid parallel 5ths/octaves? Have any of you studied their sheet music and actually seen parallel 5ths/octaves or no? I just don’t know if I should continue my classical studies if my favorite musicians don’t even follow that.

The "classical" voice leading stuff you are thinking of - avoiding parallel fifths and octaves, etc. - is classical music's link to the old Church style and counterpoint. When that historic link to the Church begins to break - like with Liszt, Debussy, and other composers - the parallel fifths/octaves concern is thrown out. Parallel harmony becomes a hallmark of Impressionism and Modernism.

I wanted to make that point so we don't overstate things about "classical" music and voice leading rules.

I would say: no, not in the sense of the old counterpoint style in classical music.

But, you can get to some of the same voice lead via a different path. Consider that in pop/rock the bass often moves by chord root and root progressions of fourths and fifths, while melodies and upper voices often move step-wise. When you do that, the voice leading will often result in something acceptable by "classical" standards.

Here is an example (Play With Fire by the Rolling Stones, sorry for the poor image quality...)

If you look at the outer voice, the bass and melody, the intervals are P1 P5 M3 P8 P5, or unison, perfect fifth, major third, perfect octave, perfect fifth. Motion to the perfect intervals is by contrary motion. I'd wager Jagger and Richards were not thinking of Fux and counterpoint, but rather playing common guitar chords and singing scale steps, because those are basic materials for guitarists and singers.

But, rock music does something else very, very often: combine common chord progressions with pentatonic melody. Here is an example (Pour Some Sugar on Me by Def Leppard)...

Notice the passage at "sugar on me..." over chords A to B. You could look at the melody E4 moving to F#4 with bass A to B and say "a-ha! parallel perfect fifths", or possibly you might consider the G#4 above bass A as the main melody tone for purposes of voice leading analysis and say G#4 consonant with chord E held as dissonance over chord A resolves down by step to F#4 consonant chord B and moving by contrary motion.

But, all that is very tedious, and not likely how the music was created. The chords E, A, B especially as power chords are just the most elementary I IV V progression in E major that guitarists can play in their sleep. Meanwhile the entire melody of the chorus is derived from the E pentatonic major scale, with a major emphasis on two important segments MI RE DO and alternating between DO and the LA below (those are the solfege syllables.) Those kinds of pentatonic scale segments are very "resonant", easy to sing, the stuff of nursery rhyme songs (but with rock rhythms and quite different lyrics.)

The point is rather than looking at the accompaniment and melody in terms of voice leading, look at it as two different parts that are essentially playing around an E major tonic. When you do that with simple elements like chords I IV V and a melody that moves about MI RE DO it will "work" without a lot of concern for technicalities like voice leading or momentary dissonances. As long as some of the important phrasing points, like the end of lines, have chord and melody match up consonantly things should work.

If you want to look at this in terms of part writing, you should look at pitch and rhythm, and ask to what extent the bass and melody are independent. IMO, the pitch aspect should be reduced to something like this... 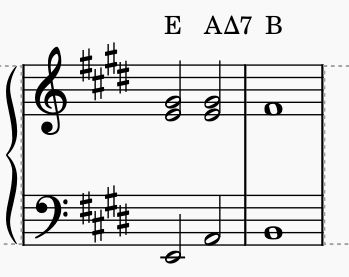 ...which removes the rhythmic details allowing us to see that in terms of pitch the bass and melody are independent. The fact that there is a momentary parallel perfect fifth movement make no meaningful impact on the basic independence of pitches.

In terms of rhythm the notation doesn't show the bass, but in the recording it's playing roots in repeated eight notes on beats 1 and 3 while resting beats 2 and 4, which is clearly independent of the melody's rhythm.

So, in music like this we may see things that conform to "classical" voice leading, and sometimes not, but that is incidental to the way the parts are really handled. The various parts play in the same tonality, but with a primary concern on rhythmic independence, and a somewhat lesser concern with pitch independence than comes incidentally when bass moves by roots and melodies move in scale steps.

I just don’t know if I should continue my classical studies if my favorite musicians don’t even follow that.

Music theory is not classical studies. I say study theory and then apply it in ways appropriate for the styles you want to analyze. If you like classical music, keep analyzing it. If you like rock music, analyze it too. But don't treat misapply theory like a Procrustean bed and compare rock music to Church counterpoint. Analyze it on it's own terms.

Two things to look up are the article Temperley, The Harmonic/Melodic Divorce in Rock Music and the chromatic minor system in Stephenson, What to Listen for in Rock for ideas about how scholars use theory to analyze rock music.

Yes, keep up your studies. While you may not use some things directly, the principles can be useful. As mentioned in Dom's comments, parallel fifths and octaves are avoided in order to keep musical lines independent. Should such independence not be needed, the "rule" isn't applicable.

A couple of "pop" examples of independent voices would be two singers singing in harmony or the melody of a song and its bass line. Parallels in this case give the appearance of one voice dropping out. Thus one hears close harmony sung in thirds or sixths. Likewise, the bass one doesn't duplicate the singer.

The accompaniment (rhythm guitar, keyboard, etc.) doesn't need such independence in general (though too many parallels in the harmony can sound thin.) I like to think of songs as having three (or four) "logical" parts. There's a melody (or harmonized melody) on top; harmonized melodies do follow theory pretty closely. There's the chord stuff in the middle which provides harmonic support to the melody; between these instruments (even in classical pieces), independence of line isn't that important. There's also the bass line which provides the support for the entire structure; the bass line does avoid parallels with the melody. There's also the rhythm (drums) section which doesn't enter directly into the harmony.

There's also the possibility of doubling a voice that doesn't behave like parallels; it only thickens or enriches the doubled voice.

Should I continue my classical study (avoiding parallel 5ths and octaves)

Avoiding parallel 5ths and octaves is useful for keeping the number of apparent independent voices constant. It is a genre-independent, even physical and biological, phenomenon that has nothing to do with pop vs classical.

If you do not CARE about keeping the number of apparent voices the same, then you don't need to avoid parallel 5ths and octaves.

Why would you want to avoid parallel octaves or fifths?

If you have two voices that are stepping up or down by different pitch steps, their sounds are perceived as coming from two different actors, objects, animals, enemies, whatever it is that your ear imagines it's tracking. But if they start moving up or down by exactly locked octaves or 5ths, they appear as one single actor, object, animal, enemy, whatever your ear is tracking. It's a biological phenomenon about how hearing and object-tracking works.

Imagine a hunter on savanna, listening to sounds - is there one, two, three or more animals or enemies? If the voices move so that their sounds are not locked in constant octave/5th relationship (maybe even other intervals apply as long as the frequency ratio is kept constant), your ear tracks them as separate entities. Your ear is answering the question: "how many lions are there". And this phenomenon is why you try to avoid parallel octaves and fifths. That is, IF you want your four-voice piece to make it sound like there are four lions all the time. If you allow parallel octaves or fifths, then during that motion there are only three lions. If ALL voices move locked in perfect unison/octaves/whatever, then there appears to be only ONE, very BIG lion. Do you want that? Sometimes you do want that effect.

The same "how many independent objects are making the sounds" tracking effect applies to all sound regardless of genre. It works in Western pop, classical, jazz, folk, Indian, Japanese, African, ALL sorts of music, and even all sorts of SOUND, even if it's not music at all.

I find it a constant display of the failure of the traditional classical music education culture that this "parallel octaves are magical evil but only in Classical land" superstition keeps being taught as a religious belief without explaining WHY the parallel steps should be avoided. Theory-first music teaching as lists of rules is dumb and it should have stopped a hundred years ago. This thing keeps being asked about on music.stackechange over and over and over again, and nothing helps. The same with minor tonality, scales and keys.

Pop music does not adhere strictly to the common practice era rules of voice leading. A very clear example is power chords, which are exactly parallel fifths.

Having a solid knowledge of classical theory will certainly illuminate many aspects of pop music, and it is often consistent with "the rules", but pop music is much looser in its approach to voice leading and key relationships.

My answer is a counter-question: Why do you want avoid parallels?

Make your music sound interesting by using both effects!

Before this rule in western music came up we had only voices in unison and parallels. One main reason for the rule was to be revolutionary opposite to earlier style.

Mind that an overdoses of polyphonic music may become boring too!

Finally: Many 20th century composers applied parallels to get their special effects.