Difference between Edim7 and Gdim7

I am a self taught keyboard player, and thus humbly request for guidance.

While trying to learn Preludio in C Major (also, Prelude) by J S Bach, I was trying to note down the chord each bar has been broken down into, for ease of reference and for learning new chords. Since I only know the basic chords, I was using this chord identifier to help me with seeing patterns and identifying the chord in each bar. I found that there's some dispute in the chord of bar 12. There are two chords which are made up using the same set of notes (G A# E C#) as in bar 12: Edim7 and Gdim7.

Upon further research, I discovered that the placement of the "E" note was making all the difference.

My question is, what difference does it make? The sound produced by both these variants seems similar to my ear. Why does this difference arise? Are there other cases like this where two different chords constitute the same notes, and how do I identify which one it is?

The chord finder tool is wrong

The chord in the Bach in C#dim7. This is because the chord in m. 13 is D minor, and the primary function of C#dim7 is to lead into a D chord (major or minor). This is the importance of spelling for enharmonically equivalent chords: the spelling helps indicate the chord's musical function.

The problem with the chord finder tool is that it doesn't distinguish between enharmonically equivalent pitches. Although dim7 chords share pitches, they are distinguished by spelling to help clarify their function in music.

A similar analysis holds for m. 14. The chord there is Bdim7, which is determined by the following chord: Cmaj. Again, this is a typical function for Bdim7 and is reflecting in the way the chord is spelled in the score.

Augmented triads are another example of enharmonically equivalent chords distinguished by function and spelled to reflect that. Caug, Eaug, and G#/Abaug all contain the same absolute pitches, but operate with different expectations. Caug might typically be followed by Fmaj or Amin; Eaug by Amaj or C#min; and G#/Abaug by C#maj or Fmin.

There are only 3 possible diminished seventh chords in 12-tone naming. The best way to look at things is to note the way the chord progresses. The 4th stacked minor third lands on the octave of the lowest note.

One usually notates that chord by its function (where the chord leads or actually, what's the next chord?). E diminished 7 is 3 stacked minor thirds: E-G-Bb-Db whereas G diminished 7 is G-Bb-Db-Fb.

There are other cases (A minor 7 and C with a 6th added or the German Sixth). In the 19th century (and probably earlier), composers would lead into a chord as if it were one version and leave as if it were another. This is particularly easy with diminished 7ths. One could (and someone probably has) lead into an E dim7 chord and leave as a G dim7.

Generally, the lowest note played will dictate which name will be given, or it's dependant on the prior and next harmony, but in a lot of cases I've seen, any name (from the four notes) is given. Since in any key, there's only one diatonic diminished seventh chord, maybe that's the safe name to give it - rooted on the 7th note from that scale.

Yes, Gdim7, B♭dim7, C♯dim7 and Edim7 all use the same 4 notes. Sometimes it's pretty clear which name would be best, sometimes not so much!

How would you analyse the chord at bar 12? 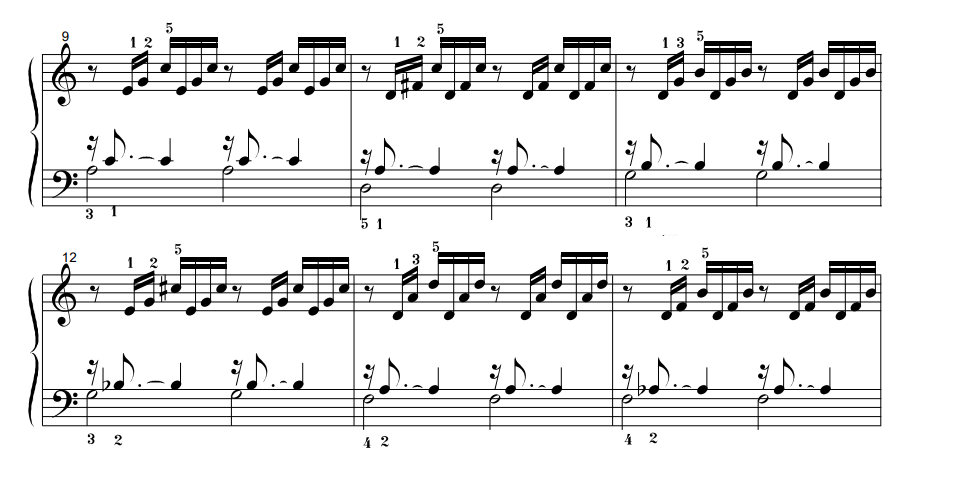 It's Bach, so we can pretty well assume it's tonal, functional harmony. It's preceded by a G major chord, followed by a F-rooted chord (in this context I'm tempted to think of it as F6 rather than a first-inversion Dm, but please yourself). Anyway, our chord seems to have a dominant function in relation to the chord that follows. That might suggest Edim7, as VIIdim7 of F. But it's also plainly a modification of the preceding G major chord, so would it be better to label it Gdim7? Functionally, we could even call it a rootless C7♭9.

There's no right answer. You should understand the discussion. Great piece, isn't it, despite its deceptive simplicity.

(Do you see why your question renaming the notated B♭ as A♯ made me flinch?)

Not the answer you're looking for? Browse other questions tagged chords chord-theory chord-inversions or ask your own question.

10
Max Size of a Chord
2
Naming chord inversions
5
Confused about C6/9 guitar chord
3
What's the difference to a player between dim7 and 7b9?
0
How does this drop 3 voicing work?
5
Spelling diminished and augmented chords
9
Dm6 Chord, why is it B and not Bb?
1
How to identify the chord progression and a specific chord
2
What is the difference between Cm7 and Eb/C?
14
Is this chord from Bach's C major Prelude G+ or Cm?