Which version of notating dynamics for woodwinds is more clear?

As in title - which is better (if any)? Specifically for flutes and oboes. 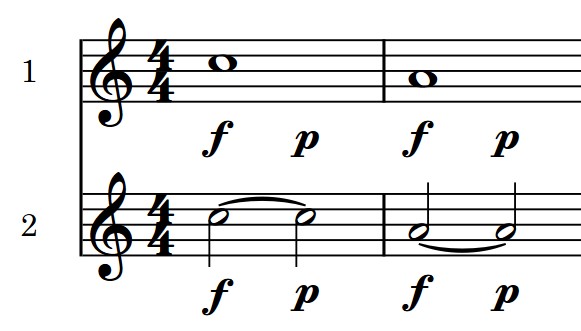 No.2 if you want the 'p' to start exactly on the third beat.

Both versions are problematic. The first version, as you noticed, is imprecise as to the timing of the piano mark. The second version could be interpreted as asking for a rearticulation on the second note.

That problem aside, following forte with piano is ambiguous by itself as it says nothing about the rate of reduction of the volume. Some interpreters will infer a decrescendo, while others will change suddenly from loud to soft.

It's better, therefore, to be explicit: use a decrescendo wedge or write sub p, where sub is short for subito, which means "suddenly." (Even this, however, leaves room for interpretation; the underlying problem is that dynamic markings are inherently imprecise, which is one reason why we use the term "interpretation." One part of learning to be a composer is learning to cede control of your creations to others.)

Traditionally, the timing of dynamic variation within a single long note is given by precise alignment. If you find that insufficient, you could invent some new notation. In option 1, you could place little half notes next to the f and p, or in option two you could add the text "tied" or "without articulation" above the second half note.

Another option might be what copy editors call "recasting": rethink your orchestration. Revoice the chord in the second half of the measure, having each instrument drop an octave or perhaps just to the next lower pitch, or, as Brian THOMAS suggested in a comment, have some of the instruments drop out in the middle of the measure.

Not the answer you're looking for? Browse other questions tagged theory notation dynamics woodwinds or ask your own question.

5
Woods to use for woodwinds
7
Is there a "preferred" tuning note for woodwinds?
4
To which notes do dynamics notation apply? (eg. pp)
9
Why can't oboes play softly while clarinets can?
2
Are there any specific criteria for notating guitar sheet music particular to the guitar?
2
When to use sub-brackets for similar instruments within a section?
3
Want to buy a wooden flute, but I don't know what the specifications entail
2
Orchestration question: Should I change which woodwinds get which lines?
1
Notating Dynamics for Drum Kit
4
The interaction between strings and woodwinds in an orchestral setting