Notation for 8va on the repeat

In piano music sometimes there is a section that is repeated (with repeat bar lines, or with DC), but on the repeat one (or both) hands are to play an octave up (or down).

Is there a common Italian notation for this?

I've seen this notated in English as:

But this is just a guess, is this good music Italian?

However, when it's for both hands:

Again this is just a guess, as I don't speak Italian.

Is there examples of this (or similar) notation in the repertoire?

Is there another way to notate this; that on the repeat, the notes for one (or both) hands are to be played an octave up (or down)?

I've found a similar notation in Bartók's Mikrokosmos, No. 113: 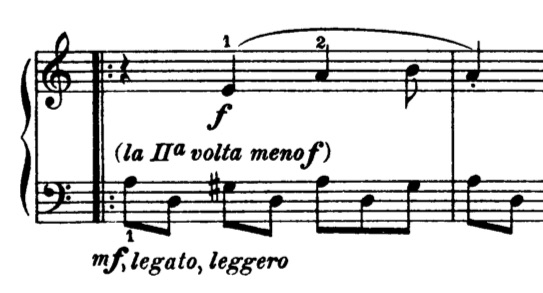 is used to show a change of dynamic on the repeat.

This seems to generally agree with both @AakashM's, and @Old_Brixtonian's answers. Though notably it uses a capital roman numeral to abbreviate seconda.

The Dolmetsch dictionary entry for IIda agrees with @AakashM's ordinal abbreviation of -da rather than Bartók's -a.

However, I am still not sure how best to indicate which hand/hands the notation is applying to.

Should I put the marking over each staff that it applies to?
This would make hand indication superfluous, but an 8va over a bass clef seems kinda yuk.

Or should I use m.d/m.s. and possibly e.m. or d.m.?
This would make it unambiguous as to whether it applies to one hand or both. But perhaps I shouldn't abbreviate entrambe le mani / le due mani ?.

I would still find it helpful to see a score that uses this (or similar notation) for a change of octave on a repeat.

If your score strictly separates the hand's activities between the staves, as piano music tends to, then a simple 2da volta 8va above the top staff should suffice, to my mind.

2da being short for seconda, since volta is feminine; also note that second- goes before the noun, to mean 'second'

In proper Italian it would be

But entrambe -"both" - might confuse people: it's rarely seen in music. So

Do you need to bother with that verbiage though? It would be much simpler to say,

Not the answer you're looking for? Browse other questions tagged piano notation octave repeats or ask your own question.

1
"First ending" has a notation "2nd time R.H. 8va"
5
Standard notation for an octave
6
What does this notation mean for the piano?
9
Why does this version of Für Elise have d# then e both with treble clefs?
6
What is the correct notation for a repeat section with 2 different beginnings?
8
Ledger Lines vs. 8va notation
8
Rendering 8va and 8vb with Abc notation?
6
When to use 8va in musical notation?
3
Sibelius Notation for Slightly Changed Repeat Passage