How to have a penetrating voice?

My voice is always buried in background sound, no matter if it is singing or speaking. What can I do to have a more penetrating voice?

What kind of voice is more penetrating, high or low pitch?

Well, you have to use the fact that the sound you produce is caused by air, which is pushed up from your lungs, and this in turn is controlled by the tension in the muscles around them. Singing teachers or voice trainers often refer to anchoring, support and other ideas to describe this. The aim is to have the muscles in your torso (diaphragm and others on the waist level and up) provide a steady and forceful air flow to your larynx. Note that these muscles are involuntary and cannot be controlled directly (see edit at end).

There are various ideas about how to exactly achieve this and how it translates into "penetration" and "power" in a voice so that it "carries" well over the orchestra like in classic opera and dramatic singing. There are specific excercises teachers often use to build up this ability, usually based on breathing. If you are interested in studying this, you might be interested in Estill voice training or similar programs.

Having that air flow, you need to think about how the resulting sound is created and amplified throughout your body. Obviously, there are many, many aspects to this also directly related to the "power" of the sound. For example, luser droog pointed out in another answer that overtones are an important factor shaping the intensity of a voice, and surely influence its character as percieved by others. But I think the breathing part is where it all starts.

In practice, I think it boils down on a personal level to discovering what you need to do in order to trigger a solid air flow in your body, and how best to resonate the resulting sound. The voice is inside your body, so you can remember the sensation by how it feels. For example: it can feel like the muscles beneath your stomach move outwards (yes!) while exhaling, and you can imagine the sound flowing out in front of you through your forhead.

Edit: there were comments that correctly pointed out that it is not possible to control just your diaphragm, it is an involuntary muscle. However, you can control the way you exhale, and excercises such as "breathing with your diaphragm" are meant to fortify breathing technique. You can find many texts on the topic, for example this page at choirly and this. The first one has this instructive picture comparing chest and diaphragmatic breathing, the second being more appropriate for controlling a (singing) voice and providing strong "support": 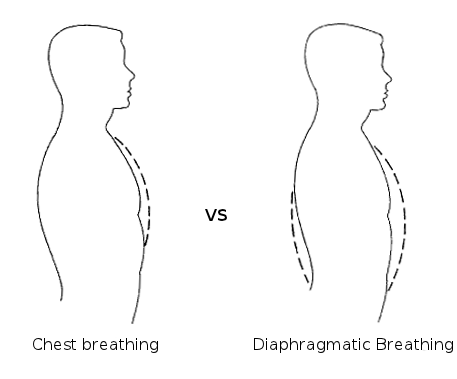 For more information on the anatomy of breathing, in particular exhaling, there is an informative NIH page that describes what happens when breathing. So, it states that under normal conditions exhaling requires no effort from your body.

Edit 2: the more I read about muscles and the way they are controlled, it is becoming clear to me that the diaphragm is both involuntary and voluntary. That means that the brain has mechanism for both the conscious and unconscious control of the that muscle system (it is apparently not just one muscle). I don't think all the scientific details are entirely understood, yet.

To complement Karol's excellent answer covering the mechanics of vocal sound production, there is another side, that of human audio perception. The human ear tends to perceive higher frequencies as having greater intensity even at the same volume as a lower frequencies. This is why Bass Amplifiers have to be so enormous to compete with a smaller guitar amplifier.

For male voices, this puts the tenor at a more favorable position than a baritone or bass. For the lower voices, achieving a piercing tone has to take into account the overtones of the fundamental. Counter-intuitively, it is the breathy sound (soft vocal fry) that produces a sort of white noise which contains loads and loads of partials and overtones. So the breath-support Karol advises also provides the tool to reinforce higher overtones when the note being sung is quite low. That is, adding more "breath" sound actually helps add more presence. (This point is disputed. In fact, I may be totally wrong about all of my "explanation".)

Edit: Of course pure white noise wouldn't work here, as it (by definition) has a flat frequency spectrum. Fortunately, the sound of breath is not pure white noise, just a rather unfocused collection of tones and overtones.

And my use of the terms high and low with regard to pitches refers to the context of human vocal ranges, not human hearing ranges where, as leftaroundabout comments, the increased-perceived-intensity effect happens over the middle-range.

In addition to the excellent answers posted by several other people here, I would like to mention another important aspect of singing.

As a classically-trained singer, I learned about placement of the voice. This is a concept that is difficult to explain, and can only really be learned by working with a good professional voice teacher.

Just like running an electric guitar through an EQ (equalization) pedal, it is possible for a trained singer to control the tonal characteristics of the voice according to its placement. Apart from the volume or loudness of the voice, the placement of the voice has an even greater impact on whether the voice is penetrating or can "cut through" a band or orchestra. By adjusting the placement of the voice, the singer can learn to emphasize certain "EQ" frequencies (the technical term for these, in physics, is formants) that tend to allow the voice to project more clearly over a band or orchestra.

Untrained singers (like the famous rock singers Bob Dylan or Tom Petty) sing with the resonant "center" of their voice in their throat. This produces a weak sound that does not penetrate or "cut through" the sound of a band or orchestra. These singers have voices that tend to be difficult to record or amplify properly, as a result (and I mean no disrespect to their chosen techinque).

Similarly, some singers sing in their "chest voice", which is a warm resonant sound (like Frank Sinatra), and some learn to sing in their "head voice", which is less warm and more clear (this is what most operatic singers use), meaning that they can control their bodies to adjust the part of the body where the sound resonates the most. Furthermore, operatically-trained singers learn to focus the sound of the head voice more toward the back of the naso-pharyngeal passages (sinuses) or more toward the front of the sinuses, into what some teachers call the "mask", to achieve different effects. Bluegrass and American folk singers tend to use the "high lonesome" sound, which doesn't really refer to the pitches sung, per se. It has more to do with the "forward" placement of the voice up in the head and into the front of the sinuses, with little or no vibrato.

All of this has a dramatic effect on how clear and penetrating the voice sounds. If you get training, you can learn to manipulate these elements to achieve different kinds of vocal effects that are suitable for different songs and different styles of music.

I think it's worth adding to the other excellent answers, that it depends on what the background sound is.

Against a background of silence, of course any voice will be audible.

Against similar frequencies, a voice will be lost. The most obvious example, is if you're part of a choir singing in unison. Your individual voice won't be audible - it will be part of the whole. But the same goes for other sounds. If a guitar is playing in your vocal range, your voice will be lost against it.

But, against dissimilar frequencies of a similar loudness, voices can be heard quite clearly. For example, if a bass singer and a tenor duet, each voice can be clearly heard.

For this reason, musical arrangements need to make space for each sound that the composer wants to be heard clearly. If the guitar and the singer share the same frequency range, then they will either fight for the listener's attention, or mesh into one "voice".

So, work out where your voice sits in the frequency range, and try to make a "hole" in the arrangement in which your voice will fit.

9
what muscles are involved in singing, and does toning them improve singing?
3
How to get a louder voice - layman

4
Question about head voice and high notes
4
How to sing “like a girl” for men?
2
Am I a low tenor or a high baritone?
4
Have I blended my singing voice right?
1
What Kind Of Voice Do I Have
4
Sound of my voice seems to have changed!
1
What’s my voice type
1
How can I improve my interpretation, “reciting” ability or just voice expressiveness?