Help with the rhythm of Chopin's C major prelude

The time signature is 2/8, and the piece is played with triplets but then at bar 17 the top triplet is replaced with a quintuplet with stretto marked above. I am a bit confused how to play this.

What type of polyrhythm is this? and what does the stretto marking mean in this situation?

TL;DR: This is a 6:5 (left-hand against right-hand) polyrhythm, intended to create rhythmic and metric tension. The stretto reinforces this. 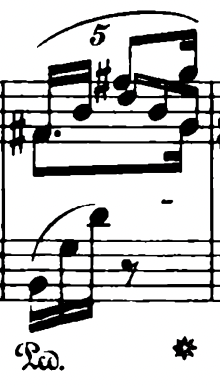 The "5" refers to the entire right-hand part, which should be played as five sixteenth notes across the two-beat bar. The notation shown in the video edition is incorrect, which is what makes it confusing.

The effect of the five-tuplet is to create a "slow-motion" feel compared to the double-triplet feel of the preceding measures. There is a sense of rhythmic or metric stretching or delay, and this is strengthened by the stretto marking. Chopin is saying to make these measures a particularly tense or emotionally fraught portion of the Prelude.

NOTE: The left-hand part should remain a triplet. This also assists in creating tension by "arguing" with the right-hand part, trying to pull it forward rhythmically.

Not the answer you're looking for? Browse other questions tagged piano rhythm polyrhythm or ask your own question.

3
Half oval 3 over notes
2
Triplets against 16th notes on piano
3
Ornament Symbol for Triplet
7
How to clearly notate tuplets, both "simple" and "complex," in irregular meters
3
How to play this rhythm in Beethoven's Moonlight Sonata? as a 4/3 polyrythm or as 6/16?
1
How to make sustained polyrhythms easier to play?
4
Question on rhythmic interpretation of Chopin's Prelude Op 28 No 1 : Performance differs from score?
2
Can someone explain the resolutions in Rachmaninoff Prelude in C# Minor?