A/ Can I understand the right hand part as based on an Hungarian Gypsy scale ?

C/ Why, when listening, do I get the impression that it's the left hand going down a perfectly legit D minor which holds the responsibility for the dissonances ? (since it's perception, I'd perfectly admit I'm alone on that one)

Moreover, since, the left hand does not play any note foreign to the D-min (current tonality prior to m#136 and tonality of the theme coming back from m-144) when the right hand actually does, I should logically put the responsibility for the dissonance on the right hand side. My ears tell me the contrary.

@A: I would not say so. The whole thing is based on a diminished 7th chord (which is quite typical for the period), plus some semitone suspensions in the right hand. Basically the bass has g e c# bb, the right hand doubles this in the discant and plays a middle voice going d#-e b#-c# a-bb f#-g, so basically e c# bb g with each note being approached by a semitone from below.

@B: I do not really understand the question, to me that makes little sense. If you are talking about the recapitulation of the main theme: This movement is a rondo, which is form that is characterised by alternating between one main theme and multiple secondary themes, something like A - B - A - C - A - D - A or something. So the form alone requires multiple recapitulations of the main theme. The movement is in D minor, the part played before this recapitulation is outlining an A dominant seventh chord (the diminished chord in question can be seen as a substitute for A dominant 7, taking A dominant 7 with small 9 and removing the root). Of course, towards the end of this part the dominant is weakened by using a major 7th instead of a minor 7th (something that is not exactly uncommon).

So this part has a dominant character, which gives it somewhat the character of a cadenza, which is usually a prologation or a delay of the tonic, played by the solist alone, and finally leading into a tonic with orchestra.

So you see, there are quite a few reasons why this leads into this recapitulation of the main theme in the tonic.

@C: I do not understand how you get to this impression. The chord is heavily related to D minor, being the dominant of it. But the diminished chord bb-c#-e-g is hard to interpret as having tonic function in D minor. It features a c#, which as leading tone immediately implies a dominant function. It features an e and a g, which both are rather hard to see as belonging to a tonic chord in D minor, especially in combination. And with having the c# and the g you have the characteristic tritone of a dominant 7th chord.

A: [Is] the right hand part as based on an Hungarian Gipsy scale?

In the excerpt below, the full-size notes are all part of a C#dim7 chord. The small notes are accented chromatic lower neighbors to the third note of each triplet grouping.

The effect is a three-voice texture in which the second (highest) notes of each triplet comprise the top voice, the first and third notes comprise the middle voice, and the left hand makes the lowest voice. 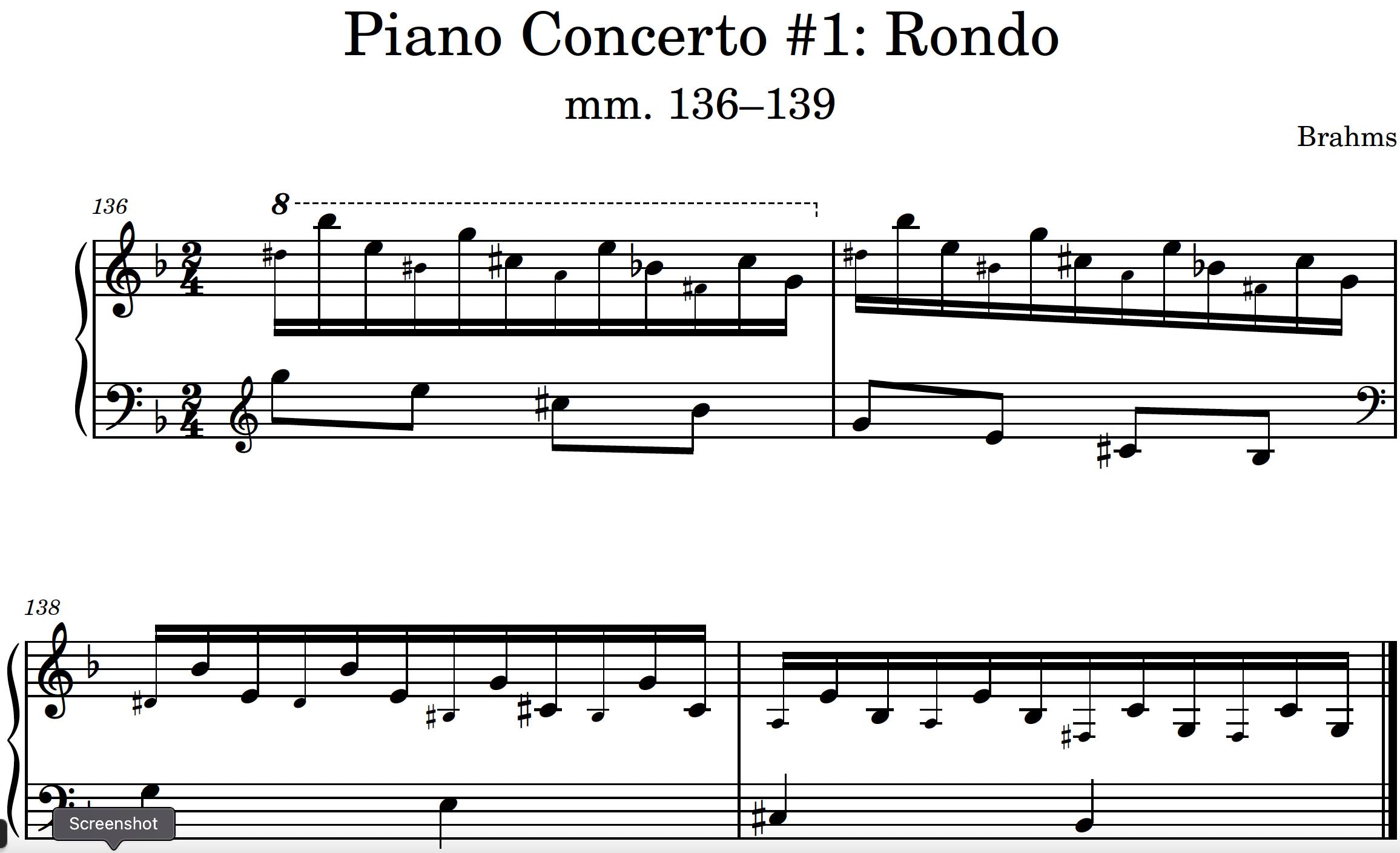 Note that you are correct to describe the beginnings of each triplet as dissonances, but incorrect to describe them as minor sixths. G-D#, for example, is an augmented fifth — a dissonant interval. It's enharmonic equivalent, G-Eb, is a minor sixth, which is consonant. This difference in how the same pitches sound in context is why the spellings and interval labels are different.

Also, to characterize this section as a scale would be incorrect. It is an arpeggio that includes a series of non-harmonic tones. However, as a tangential point, the notes involved make up a whole-half diminished (octatonic) scale rooted on C#.

There is a lot going on here. Locally, these measures represent a "cooling off period". Notice that in mm. 136–140 the left hand shifts from eighth notes to quarter notes, then in mm. 141—143 to a multimeasure sustained octave. At the same time, the right hand is shifting from wide intervals (sixths) descending over three octaves (mm. 136 – 139) toward much smaller intervals that remain at the same octave.

Harmonically, Brahms also uses this time to shift from the fairly ambiguous diminished seventh chord to the more "certain" dominant seventh chord, easing us gently into the main theme.

C: Why ... do I get the impression that it's the left hand going down a perfectly legit D minor?

Why one might hear it as a D minor arpeggio seems very odd, but hearing it as being in the key of D minor makes perfect sense, since that's exactly where we are. The dissonances that occur each half-beat are due to the lower neighbors described in part (A) above.

Not the answer you're looking for? Browse other questions tagged scales analysis consonance-and-dissonance or ask your own question.