Hold pedal halfway between two notches to allow the string to vibrate against the tuning gear. 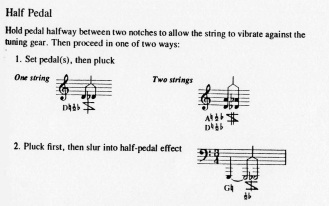 So, how exactly is half pedal executed on the harp? (if possible suggest a sound file or video demonstrating that)

From an executional standpoint, it helps to know how the harp's mechanism works.

The harp's pedals are laid into a zig-zag pathway, and have the same kind of spring tension in an upwards vertical direction as a piano pedal. However, the pedals can also be moved side-to-side to go through this pathway. When the pedal is all the way up, it can be pressed vertically down and horizontally away from the center of the instrument to rest on the next notch in the zig-zag. From here, there is one more notch where the pedal can rest, again, by pressing down and away.

The harp's strings are anchored to a tuning peg at the top of the instrument, and can be altered up in pitch by half steps by small rotational mechanisms that grab the strings between two pegs. There are two of these mechanisms per string, allowing for a range of two half-steps of alteration.

Each pedal corresponds to a set of strings on the harp (all the same pitch in multiple octaves). When the pedal is all the way up, the alteration mechanisms are both open, so the full string is vibrating all the way to the tuning peg. Moving the pedal down to the first notch actuates the first mechanism, which rotates to grasp the string between two pegs at a half step. Essentially, it's like a fret, except instead of pressing the string over the fret, the fret is grabbing the string. The second notch on the pedal actuates the second mechanism, raising the pitch of those strings a second half step.

So then, the half pedal technique involves only rotating the peg mechanism (tuning gear) so that it comes in contact with the vibrating string, but doesn't shorten the vibrating length. It would be like striking a note on the guitar and then lightly brushing your fingernail on the string without dampening it fully. The harpist would execute this by moving the pedal vertically until the gear starts touching the string, but not so far that it can be rested on the next notch. Since this is going to be different for each harp, this definitely constitutes an "extended technique", and I concur with @jjmusicnotes that the sound of this will be very subtle. I'll suggest it might best be used in a solo harp setting.

First off, the Kurt Stone is a great notational resource, so kudos for introducing that resource to this site. I'd also suggest Gardner Reed's 20th Century Notation as well.

To get the best sense of this sound, I would highly suggest talking to a harpist and hearing the effect in real life. The difference is akin to seeing a picture of a famous painting, and then actually seeing the painting in real life - there is subtlety and nuance that a photograph (or in this case, a recording) cannot capture.

Orchestrationally, I can tell you that this is a very subtle effect and will be most effective if the scoring is extraordinarily thin or if supported somehow - perhaps by a sizzle cymbal or perhaps paperclips being dropped on a suspended cymbal or tossed against a tam-tam. (Now I'm getting ideas!)

But all the same, talk to a harpist and get them to show you (and if you're really lucky, ask them to show you how to hold / play the harp. Harpists love it when composers at least attempt to write thoughtfully for their instrument!)

Not the answer you're looking for? Browse other questions tagged technique instruments string-instruments harp or ask your own question.

7
Thicker or thinner gauge for frequently snapping harp strings?
10
Harp Tuning Tendencies
1
Buying a harp, what to consider
5
Scoring for the harp
1
Harp Multiple Glissando
1
Shape of a concert harp
2
Weird symbol in score for harp
3
What is the meaning of S.H. in a harp score?
2
Doubt about Harp Sound