How are the Imperial March intro harmonies best interpreted on piano?

I'm wondering how the below is most effectively performed on piano. I've solved the 'rhythm problem' (i.e., the very rapid triplet repetitions) by using both hands via piano 'split' feature — each playing identical pitches but on different keys — but am not sure how to handle the 5 pitch classes shown in the 2nd measure. There are 4 classes crammed into the span of a major 3rd! My novice reasoning says the G in the bass is essential, and that - because 3 of the 4 remaining classes are also present at the end of measure 1 - the A should also probably be played to further distinguish the two measures. And... that's as far as I get. This is my first attempt at such a task on the piano, and I'd be grateful for any guidance...

(I've 'condensed' the below with copyright issues in mind; only the last beat of the 2nd measure is shown. I'm aware that some dotted notes appear undotted, but I'm all out of dots...)

Edit: because of the machinegun-esque rapidity of the triplets, I need both hands playing identical notes (have 'split' my piano so that e.g. the viola's 1st note may be played on 2 widely-separated keys) 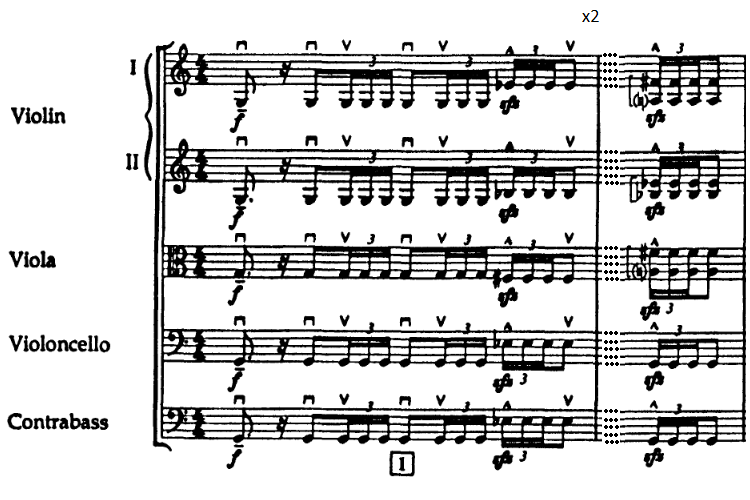 Given the goal of playing the same pitches in each hand (with one portion of the keyboard octave-transposed to match the other), I would voice the chord as shown below. The bass G is, as surmised, necessary, as is the F# on top, being the highest — and therefore most aurally prominent — pitch. The Eb I would also keep, because it carries over from the previous chord in the parallel position.

The A I would leave out, because it adds the least to the sound, muddies the G, and is physically the most awkward to include.

The Bb (in red) is in parentheses. Play it if possible, but it can be dropped if one or both hands has difficulty reaching it. Note that in the case of one hand playing it comfortably, the chord repetition is so quick, that its absence in the other hand would probably not be noticed. 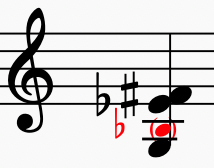 FWIW: given the option of playing the complete chord ...

I would play the chord as notated below: A G octave in the left hand, and the chord A-Bb-Eb-F# in the right. 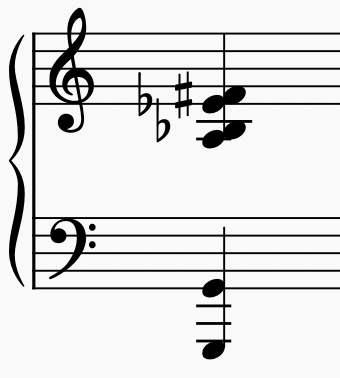 The contrabass sounds an octave lower than written, so the bass and cello Gs are an octave apart, which accounts for the left hand.

The viola and violin I are playing the A-F# sixth in unison, with the violin II playing the Bb-Eb fourth.

It's true that if one reorders the pitches, the F#, G, A, and Bb all fit within a (enharmonic) major third, but that isn't a concern in this case. The notes are actually spread out in a way fairly convenient for translation to the piano.

Not the answer you're looking for? Browse other questions tagged theory piano harmony arranging or ask your own question.