The following section (mm. 49–52) is from "Metamorphosis II" by Philip Glass with 4/4 signature.

I don't understand how beats are adding up:

There are 4x6 16th notes in each G clef measure, equivalent to 6/4 per measure.

Are those notes pointed by red arrows 16th notes or 8th notes? They have double beams, so I thought they were 16th notes. 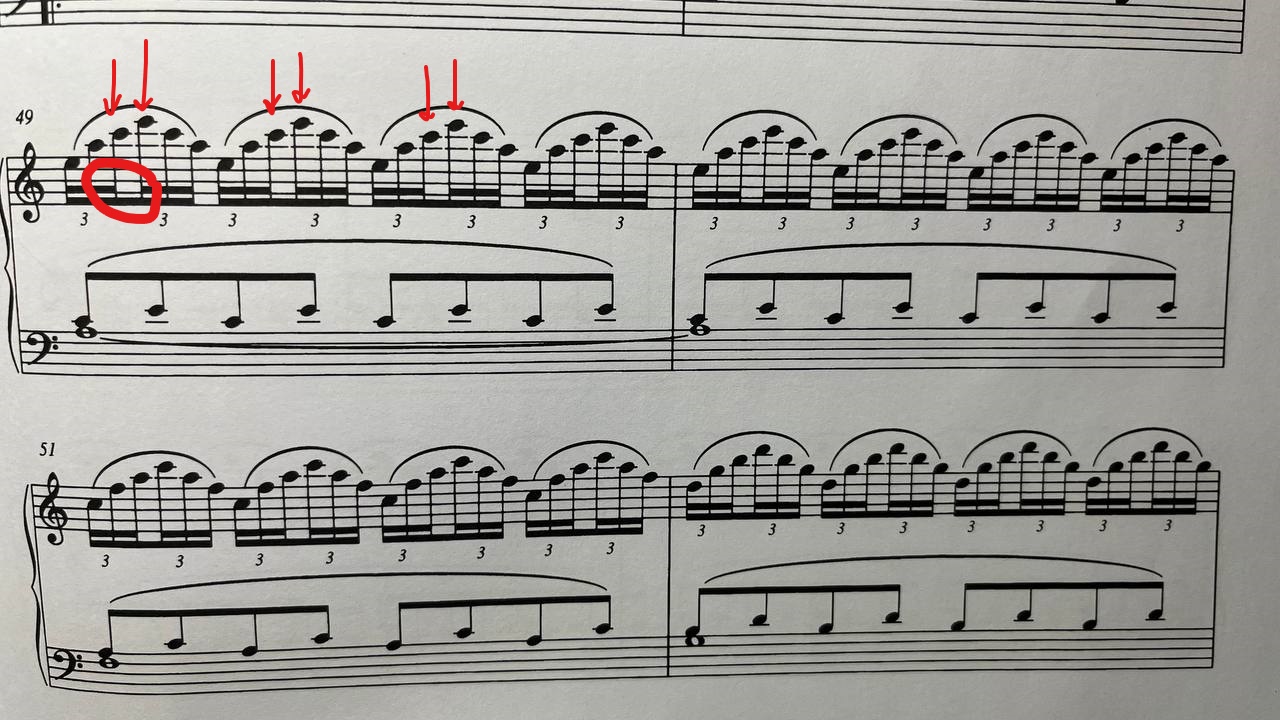 The "3" below each group of three sixteenth notes is a triplet indicator. Rather than 4x6 16ths notes, consider that it's 8x3 16ths.

Each sixteenth-note triplet is the equivalent of one half beat, and half beats are connected with single beams. Usually, of course, the half beat in 4/4 time would be represented by eighth notes, but in this case sixteenth note triplets reside where ordinarily each eighth note would be.

One might wonder why sixteenth-note sextuplets weren't used, but short of contacting the editor, a reasonable guess is that the goal was to help visually align each triplet with its corresponding left-hand eighth note.

Under each three notes is a little '3'. It used to be, and sometimes still is, accompanied by a bracket. It means those three notes are a little faster than normal - they take up the same time as their normal two. With that bracket shown, you'd probably have noticed, and understood. Unsurprisingly, they're called triplets, and doing the sums again will give you the correct answer!

Every single note-head is attached to a double beam or 'tail', so each is called a semiquaver (16th note), it's just that because they're in triplets, it's easier to read writing them in threes.

Looking at how they line up against the quavers underneath, it's easier to see how they all fit together timing wise.

All of the notes have the same duration. You're overlooking the 3 by each group of three sixteenth notes. These are sixteenth-note triplets, of which there are twenty-four in a measure of 4/4 time. The broken second beam makes it clearer that there are groups of three, while the unbroken first beam fulfills the standard practice of beaming by beat.

Neither Wikipedia nor Dolmetsch online's music theory page has a good succinct explanation of triplet. The definition in Dolmetsch's dictionary is pretty good, but I don't think it's possible to link directly:

a group of three notes of equal time value performed in the time of two of them, however, (i) one or two of the notes may be rests of equivalent value, and (ii) a consecutive pair may be replaced by a note of double value.

7
Notes not adding up to time signature?
4
How to count a note which has 6 on above it?

22
What is the connection between time-signature, beat, and tempo?
8
Why is it so hard to count beats and play at the same time?
9
When does the amount of beats not add up to the time signature? (Besides pickup measures)
23
How is it that 12 eighth notes fit in a measure labeled as common time?
7
Why are time signatures not used in this score?
2
Number of beats doesn't match time signature - how to play this?
4
Issue with notes going over the time signature