Ties with dots in Haydn

Here's an example of ties with dots on the end tied note in a Haydn String Quartet (Op. 76 No. 2). There appear to be many differing views on how these are to be interpreted and played. What do you think, all? 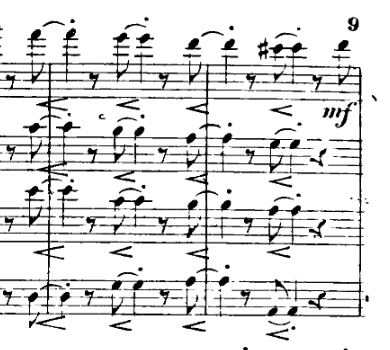 The general idea of a staccato dot is to make the note concerned half as long as it usually is. So a quaver tied to a (staccato) dotted crotchet would be played for as long as just a crotchet's worth length.

I think the idea of dotting here is to ensure that the rest is 'played', and not bled into by the tied note. So it could have been written as a quaver tied across the bar to another quaver, followed by a crotchet rest. Why Haydn decided to represent his piece as he did, we'll never know, but the staccato dot is not an exact thing, so gives the player some degree of wiggle room. Trouble is, when a quartet is playing, there must be total agreement, otherwise it'll all sound sloppy. So that needs to be reached in rehearsals, mainly by feel rather than counting.

My violin teacher from years gone by would have replaced that rest by a sniff - of pre-determined length! But certainly longer than merely a quaver's value.

EDIT: as Alexander Woo points out, there is a crescendo marked for each as well, so the cut-off point for each tied note needs to be orchestrated. Not sure how that affects the length of the two tied notes, but worth mentioning.

9
Are there any situations when one needs to make a distinction between slurs and ties?
4
Two rests and a note that isn't played? misunderstanding ties
2
Why is this section on the measure 'grouped' with a 3?
6
Should slurs encompass tied notes from before and/or after?
3
What is the correct way to divide notes?
6
Do note lengths matter when they have l.v. ties?
22
Notation - when to use staccato vs rests
12
Rare abbreviation in Haydn String Quartet
7
Which came first: the dot or the tie?