how to play a bass note and chord in the left hand separately?

When I first wrote my answer, I looked at the beginning and thought it was just an oddly notated piano piece. After reading some of the comments and paying closer attention to measures 7 and 8, I think this may be a condensed version of an ensemble piece, not meant for direct performance at all, but shown on one staff system for the purposes of analysis.

As Tim said, the bass notes should not be sustained while the chords are played. Rests are explicitly shown. At first, it seems one could play the lower staff on piano with the left hand by pedaling the bass note through its duration to give enough time to lift the hand and prepare for the chord. I've pedaled many a waltz this way: 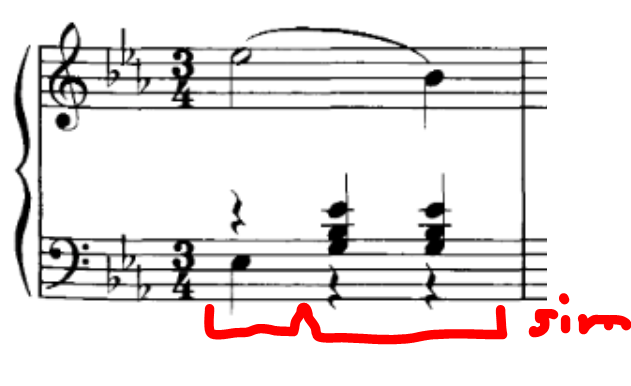 But once we get to measure 7, we have a chord in the bass clef that spans a tenth (from E♭3 to G4) followed by a chord that spans a twelfth (from B♭2 to F4): 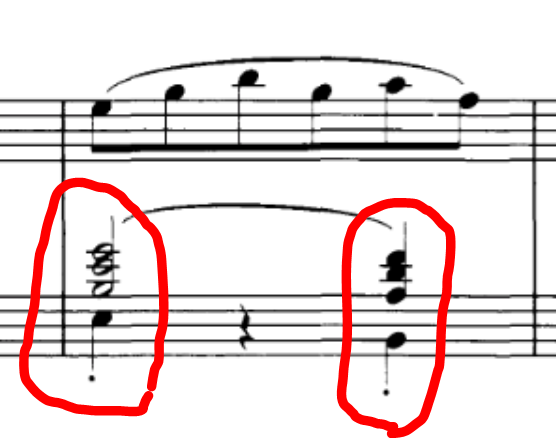 You'd need "Rachmaninoff hands" to play that. At least the bass notes are notated staccato to give us license to arpeggiate a bit. (If we ignore the slur between the chords!)

Then we get to measure 8 which is simply impossible in two [human] hands as it spans two octaves (from E♭2 to E♭4):

So I think if this is for piano at all, the piano is meant to play only the bass clef. The rests clearly indicate it should be thought of as two voices.

If the treble clef is intended for a solo instrument, I'm not sure which one. The chords in measures 4 and 5 suggest it's a string, not a wind: 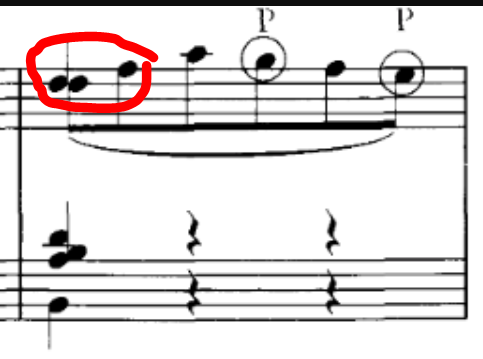 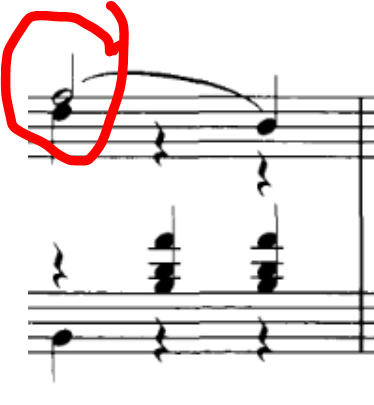 The melody is in the range of a violin.

I don't think the "P" above certain notes is standard notation for any particular instrument; it's more likely part of a lesson— the "P" only occurs above circled notes, when the melody is descending through non-chord tones. I concur with Dekkadeci and Laurence Payne that these are indicating "passing notes".

If this piece were really is meant for a single instrument, what might it be?

One other possibility for the whole piece is accordion. I'd have to check to see whether the bass clef chord voicing aligns with a stradella system. However, accordion music often omits the chord tones and just notates the root with a symbol to indicate chord type.

This is not a piano part that can be played literally. More a 'short score' of an instrumental work. A pianist would recognise the musical intentions and do the best they could to reproduce them (and might actually get surprisingly close with judicious pedalling and chord spreading!)

What are the circled notes marked 'p'? My guess is that this piece may be presented for analysis rather than for performance, and 'p' means 'passing note'.

Strictly speaking the bass note does not need holding with pedal. The rests tell us that. The bass note lasts one beat only, the chords one beat each. That's the way it's written. It may sound better with being pedalled, but that's not what it asks for.

10
Is there a special way to notate a repeat for the right (treble) hand but not the left (bass) hand?
3
How to indicate left hand for piano sheet music
3
How to play the sustain pedal and rests (piano)
4
What is the left hand doing in classical music?
2
How to create rhythm parts on piano?