I usually use some some of tuner to tune my guitar, but occasionally I will try to use the 5th fret method. In attempting to do so today, something puzzled me about the string setup on the guitar.

However, G is only 4 notes away from B!!! If I play the 5th fret on the G string, the result is a C (verified by my tuner as well). Because of this, the 5th fret method does not work for me for the G and B strings: if my B string is tuned correctly (as a B) then it will be a B while the 5th fret of G will be a C.

What is going on? I have heard the mnemonic phrase "Eddie Ate Dynamite, Good Bye Eddie" all of my life. But it does even seem to be right?

Summarized, here are my questions.

(2) Why was the standard guitar built the way it was, with each string being 5 notes apart except for G and B? I know that other versions of guitars (say with more strings) exist. Is there a good reference I could have that compares the setups for guitars, weighing their pros and cons.

Thanks so much for your time!

Don't get hung up on the idea that a method name like "5th fret method" provides an adequate description of the method. I have never heard it called the 5th fret method myself, but of course that is one common way to tune by ear. There are many other ways to tune by ear, too.

Does the 5th Fret System Work?

Standard tuning for a guitar is E A D G B E. The notes are all a fourth apart, except for G and B which are a third apart. To tune by ear, you compare the note on the 5th fret of a string with the open string above it, unless you are comparing the G string with the B string, in which case you compare the note on the 4th fret of the G string with the open B string. This is a very common way of tuning by ear; of course you need to get at least one string in tune by other means, e.g., using a tuner, tuning fork, pitch pipe, or some other reference (say, another instrument you are playing with).

Another method I sometimes use is to play across the neck: the harmonics at the 7th fret of the sixth and fifth strings, the fretted notes at the 9th fret of the fourth and third strings, the open B and high E strings. Here the harmonic on the sixth string, the fretted note on the 4th string, and the open B string are all B in the same octave, and should sound as the same pitch. The harmonic on the 5th string, the fretted note on the third string, and the open E string are all E in the same octave. With this method there are three points of comparison for two notes spread out over a part of the neck that gets used a lot. This can be a very useful comparison for tuning.

The standard tuning evolved over many years. There are other ways to tune. One of them is "all-fourths tuning" which makes the tuning symmetrical by removing the third between G and B. This tuning is E A D G C F.

All of that said, there have been some notable players who use all-fourths tuning. Off the top of my head, I believe that Stanley Jordan and Tom Quayle both use or have used all-fourths.

This method works only for the strings which are a five semitones apart, you cannot tune the B string from the G string this way as you noticed. You have to do it with fourth fret with this couple of strings.

One reason the guitar is tuned this way is that it's fairly convenient to have the lowest and the highest strings playing the same note, which would not be the case if they were all spaced the same.

Answer 1). Bass guitars are usually tuned by what you call the '5th fret method'. That's mainly because basses aren't used for chord playing. (They can and are, of course, but nowhere near as much as guitars!)

Whereas guitars are often played as chordal instruments, with barre chords being utilised as we go up the neck to the dusty region. To facilitate that, the top and bottom strings are best tuned to play the same note name - namely E in most circumstances. That means that in order to achieve that, somewhere along the strings' tuning, there has to be an oddity - 4 frets to the next, rather than 5.

After many tries at reconciling this, the 3/2 string interval was found to make it easiest to play all sorts of chord shapes (beginners may disagree!), rather than any other pair of strings. Thus we have it. 5 frets between strings, except 3/2, which bottomed out at 4 frets.

7 string guitars continue the lower pattern, and retain the 5 frets interval, which is sort of in keeping with basses, and, again, works best.

A visual would seem to make this much clearer... 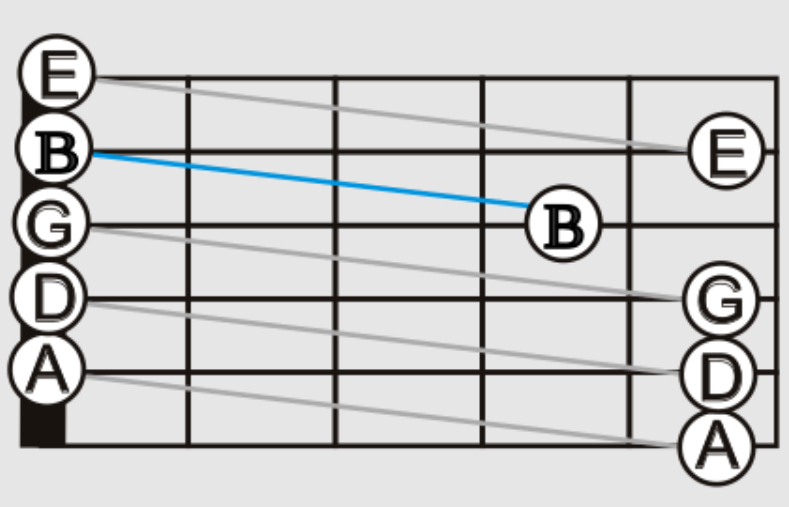 I've not heard the name "5th fret method" but I understood what you meant. The important thing is to see that the tuning method is not all on the fifth fret.

Why was the standard guitar built the way it was

There is a similar method of tuning the guitar using harmonics that may interest you. Here is a picture... 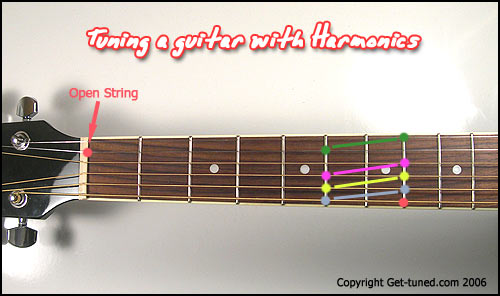 Notice how the B string again is the odd one out with the tuning pattern. You need to compare open B with low E string 7th fret harmonic. You can find lots of web pages and videos demonstrating it too.

Is there a good reference I could have that compares the setups for guitars, weighing their pros and cons.

I think you may be asking about alternate tunings. There are many ways to tune a guitar beside standard EADGBE. I don't have a handy reference for alterative tunings, but you should be able to find a lot online. There are a few reasons to use alternate tunings:

22
Poor quality guitars that don't tune
7
Why tune the guitar other than standard?
4
Short scale guitar tuning to A
9
What is an effective way to tune a guitar for an unpracticed ear?
1
Guitar tuning: Facing problems with High E string
3
Guitar same fret different string
2
Electric guitar tuning changes in different holding positions
2
Can you move the strings on 3/4 size electric guitar to get better tuning?
3
Guitar Standard Notation Fret & String Selection