How is a small MIDI keyboard mapped to a bass guitar strings?

Not sure if this is a lack of software or music knowledge (probably both). I started using a DAW (Cakewalk) and bought a very basic midi keyboard (Akai mini) to start making some very simple music. I am trying to copy bass guitar tabs or to "play" them with the bass plugin in the DAW. I can play any note with the mouse, and as the keyboard is small I understand not all keys can be mapped to the strings as on my keyboard there are not enough keys. But how to chose which notes are played when a given key is pressed? Pictures to illustrate this:

Mouse playing strings seem mapped to same key -> how to chose which string is played for this key?

I naively tried to change the octave up and down on the Akai but it did not work. Any hint about to even where start looking at would be appreciated!

when hitting these with the mouse on the DAW as in the pictures, I do not hear the same sound, hence the question.

So, the problem is not knowing about how a bass guitar works, about pitch, tone, strings and the fretboard.

In the first picture, you have clicked the 1st fret of the 1st string, and in the second picture you've clicked the 11th fret of the 3rd string. On a real bass guitar, these produce the same fundamental pitch, but a slightly different tone. You could also have played, for example, the 6th fret of the 2nd string. Thinner strings usually produce a slightly brighter sound than the thicker ones.

I suppose that the bass plugin (virtual instrument) in your DAW has separately recorded "samples" from each string, even for the same pitch, and it is possible for the user to explicitly specify the desired string by clicking on the virtual fretboard. Because these different places on the fretboard trigger a different sample (recording) from a different string, you hear a slightly different sound. From a musical point of view, all of the G#2 notes perform essentially the same musical function. If you just want to reproduce a song, you can use any G#2 and it will do the job. In the tab you're reading, they have had to choose one string and fret combination out of the many alternatives. Maybe it's a transcription of someone's performance, or just one way to play that song on a bass.

On a five-string bass guitar with 24 frets, the G#2 note is found in five places:

If your song needs a G#2 note, and you have a five-string bass, you could play it with any of the shown fretboard positions. Which of the five positions to use, is usually up to what is the most comfortable thing for you to play at that part of the song. Or if you want the tone of a particular string, then you use that string.

By pressing a MIDI keyboard key, it is possible to say "G#2" in only one way, and it sends a G#2 MIDI Note-On message to your computer's DAW application. The bass plugin in the DAW must then somehow guess which of the five possible G#2 notes you meant.

The tablature ("tab") notation that you're trying to copy into the computer, reflects the same difference. In tab, you have all five strings, and all of them can play G#2, but the corresponding staff notation has ony one place for all of the notes. In the example below, the Guitar Pro application has placed two staff notes (the thick ovals ) on the same pitch position, even though there should be five: (I don't even know how more than two simultanous notes of the same pitch would be shown on the same staff) 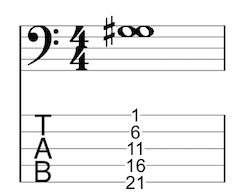 Depending on the DAW and the specific bass plugin or sample library, it may be possible to specify each string separately with for example key switches, MIDI Control Change messages, MIDI Program Change messages or by using separate MIDI channels. Key switches mean that some of the lowest notes (or sometimes the highest notes) of the MIDI note range are special control keys, which don't play sounds but are used to specifying various control instructions to a sampler or virtual instrument. If and how this is possible in the Cakewalk bass plugin, you need to consult the user manual or Cakewalk's support.

I don't know about Cakewalk - is there perhaps even a tab editor you could use? In a tab-based editor such as Guitar Pro, it's possible to type in tab in its own native language, as tab. 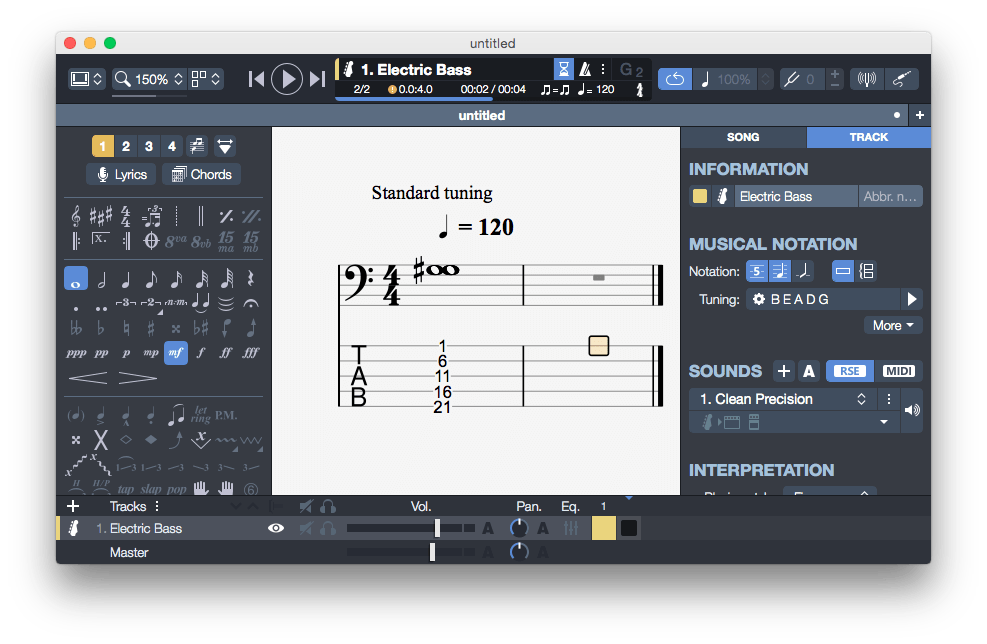 If you only want to recreate a specific song in your DAW, you can probably use any string, and nobody will hear a difference, as long as it's the right note. You could probably even replace the whole bass guitar plugin with a synth bass sound, a Rhodes piano or some other entirely different instrument which doesn't have strings or a fretboard at all.

This is not a direct answer to your question how it could be done in Cakewalk but explains some concept of virtual instrument plugins and keyboards and how they relate.

First let's have a look at the keyboard. The basic concept of a (midi) keyboard itself is limited: one key, one note. Notes are transmitted as numbers (Middle C=60). Moving the octave up or down will just add a fixed interval (-+12) to that number. Octave up and playing a middle C transmits a note height of 72. Octave down Middle C is transmitted to the DAW by sending a 48.

The DAW plugin is another story. Virtual instruments that are created by a plugin producer may react to different notes in a different way and depend on the plugin design itself. Some will assign special notes in the lower or upper range for certain expressions, in the case of a bass plugin you might get sliding frets, pop, ghost notes, legato playing etc. However, in the case of fretted instruments you can sometimes assign the playing range. I attached an example of a Native Instruments Kontakt plugin. Lightblue is the playing range and the keys in red, green control the expression, sound, open strings, up and down bowing. 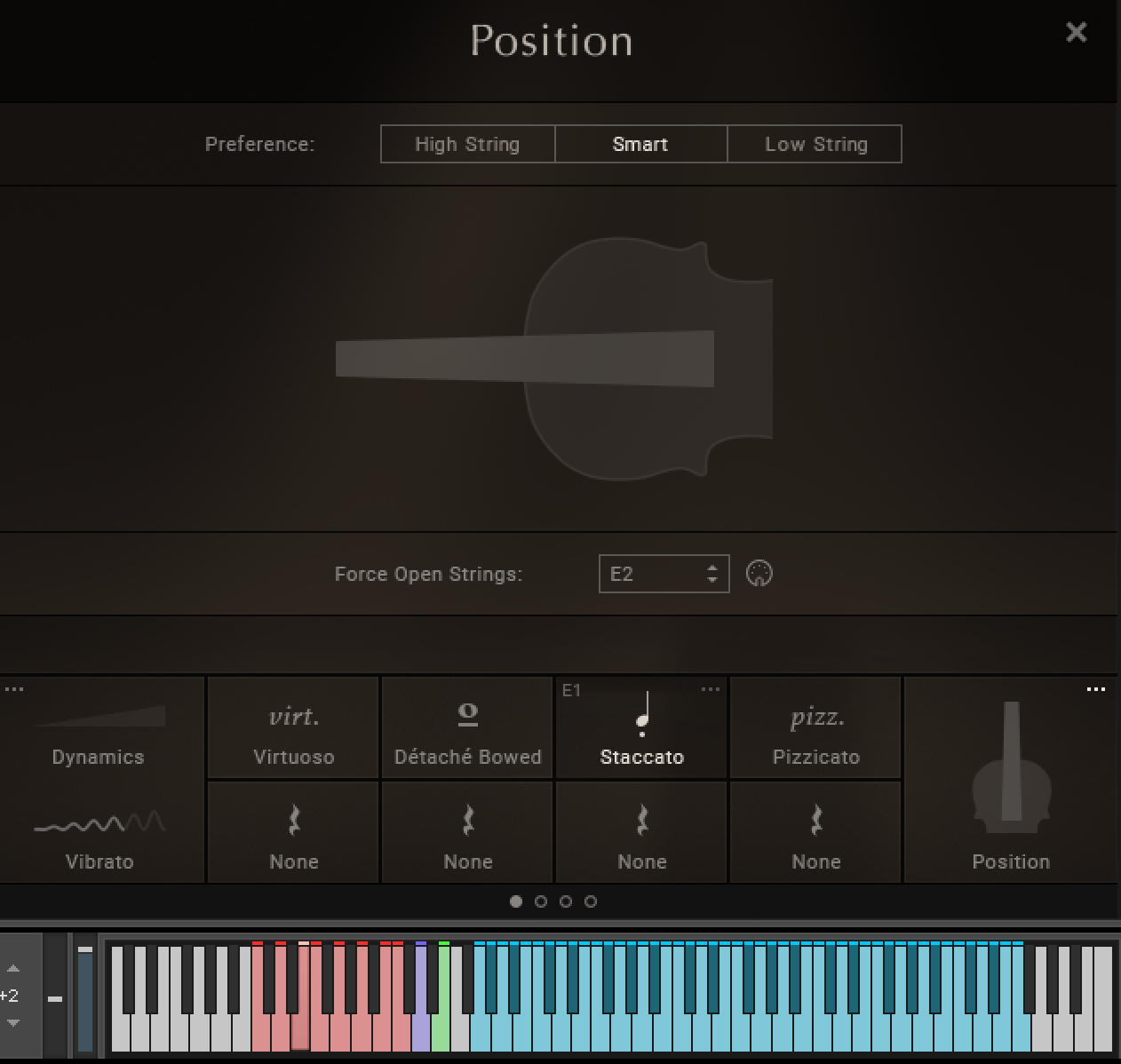 On a side note: quite good control you can have with NI Kontakt Scarbee basses but their plugins don't come cheap.

To obtain a better separation of the strings some plugins might use split channels, so theoretically you can play the note on that specific string by selecting the correct channel (e.g. assign channel 1 to the B string, channel 2 to the E string etc.). In any case this is not feasible for a live performance with a small keyboard but useful for programmed patterns. For live performance you might choose multichannel instruments (midi guitars, Linnstrument) or split keyboards, and possibly use multi channels in the DAW to fine tune your performance.

However, for the first steps in exploring this infinite universe I would stick with the assigned ranges. The choices made by virtual instrument producers are usually sound (no pun intended).

3
In Ableton Live, can a parameter be mapped to midi messages from a midi track?
3
Advice on how to gain velocity feeling on DAW keyboard (piano)
1
Connecting midi keyboard to pc
0
How many octaves can a midi keyboard record?
5
MIDI Recording: Release of Sustain Pedal kills the key sound
3
MIDI routing (?) in Ableton freezes after a few seconds... any ideas?
3
midi keyboard to audio interface
3
Computer workstation setup for complex live performances