is Secondary chord (triad, seventh) can overlapping Fifth when is not substitute chord? 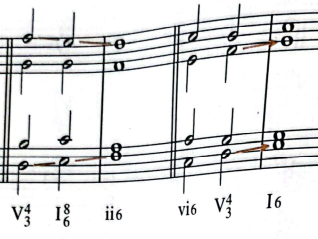 i giving the situation. image is a resolution of V34

left case of the image is

'D-F' in V going to 'E-E' in I as contrary motion. and from that position, a 'harmonic connection' (any notes shared between two chords should remain in the same voice, and the rest of the voices move the shortest distance possible while avoiding breaking any other rules.) with the ii6's F-D is possible.

but right case of the image is

can't harmonic connection if 'D-F' in V going to 'E-E' in I as contrary motion. so F is going to up.

However, my curiosity here is that if V's 'D-F' goes to the I's 'E-E as contrary motion , can the following progress be made.

but if is not substitute chord? can overlapping Fifth and Is it possible to proceed as above?

17
My ear is not very well trained - what can I look for as easy hints when trying to identify a ii-V-I progression in blues music?
6
How to tell when chords are separate entities and not part of one prevailing chord?
0
F Dm Am C (Lydian?) Progression
0
Why is the fifth chord a dominant 7? And if it is a dominant 7, why most of the songs use just D major along with G and not D7?
3
In minor, can the neapolitan sixth chord resolve to the diminished seventh chord on the leading-tone (of the same key)?
6
How can I play a solo when there is no chord progression?
0
Unanswered questions about Second Inversion and Perfect fourth