This is the piece I want to discuss: Waltz in C♯ minor. You can listen to it on YouTube here (played by Arthur Rubinstein) with added music score, or on musescore.com here (played as MIDI) also with music score.

Concretely I want to focus on 16 bars 33-48 (screenshot from musescore.com): 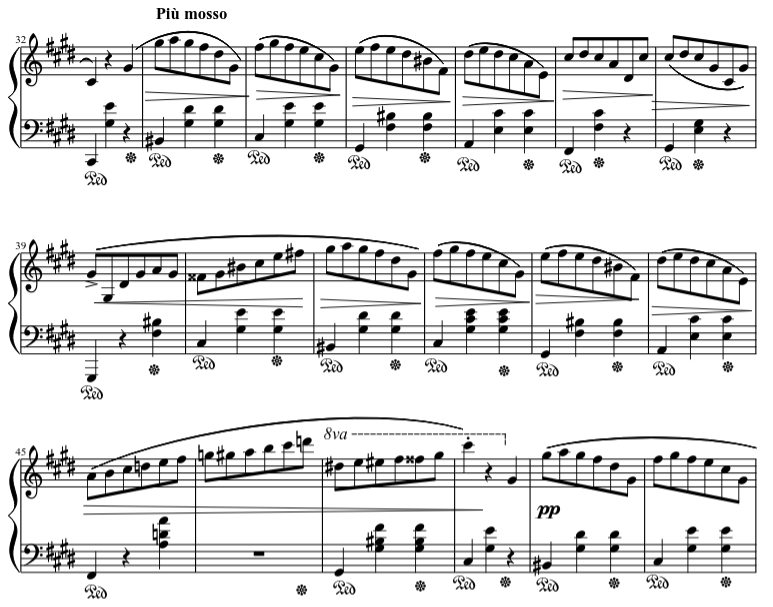 Question 1: What is the point of this double C#? I think it is hardly distinguishable by ears whether it is double or single C#.

Question 2: Was this doubled C# really present in original Chopin score? (I can not find original score, do you have any link to the original?)

Another question regarding harmony...

I did a little (nonprofessional) harmony analysis of these bars 33-48. I think the harmony goes like this:

Question 3: Is my analysis correct? Can also other chords be extended like F#m to F#m6 and C#m/G# to C#sus2/G#? And what chord could there be in 46 when no notes are played by left hand?

As Tim suggested, these are several questions and should be split. I can split the answer if needed.

Question 1: What is the point of this double C#? I think it is hardly distinguishable by ears whether it is double or single C#.

Question 2: Was this doubled C# really present in original Chopin score? (I can not find original score, do you have any link to the original?)

Unfortunately can't help with this. As Dekkadeci suggested it might be someone's interpretation or mistake.

Question 3: Is my analysis correct?

Yes, but note it should be G#/B#, instead of G#/C. Even though B# and C are enharmonically the same note, B# is a major third from G, while C is a diminished fourth. Chords in western classical/romantic style are built by stacking thirds, and following this patterns helps to understand how they work.

what chord could there be in 46 when no notes are played by left hand?

I would consider it to be still D#, even though it contains some chromatic notes, as it continues the dominant buildup than then resolves to G# and C#m.

maybe instead of F#m could be also F#m6

Of course you need to look at both hands. F#m is a diatonic chord, so even if the A note was not played at all, we would hear the chord as F#m. On the other hand the D# note comes on a weak part of the measure, it is not accented, so to me it doesn't feel like need to be notated as a part of the chord. It is a diatonic passing tone.

Question 4: Why 3rd is omitted only in this particular case?

That's an artistic choice. First of all, it is not omitted entirely, it is played by the right hand. Second, there is relatively little movement between A (VI) and F#m (IV), the A note is retained from the A chord. Then, the following connection F#m (IV) to C#m/G# (I) is also weak (in comparison to dominant seventh, and secondary dominant present in the progression). Also perhaps Chopin decided that F# to G# movement is more interesting to emphasize.

As above, no need to mention the diatonic passing note D# in the chord symbol. Moreover "sus2" would suggest that D is played instead of the third, E, which is not true, left hand does play E.

If you really wanted to notate C#m chord with added D#, you would call it C#madd2. I don't think such chord is common in Chopin's music. Perhaps you could find C#m9, but it would suggest also presence of minor seventh, B note.

There are two publicly available autographs of this Waltz. The first is an incomplete sketch, the second is complete. 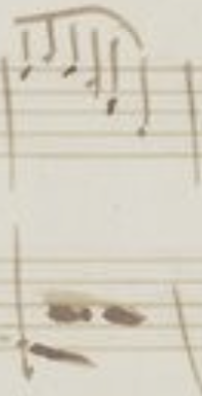 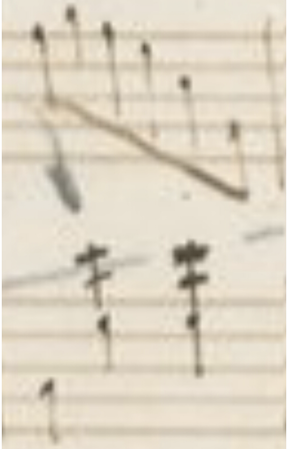 The first autograph is ambiguous, since Chopin did not include the left hand. The second autograph makes clear why the error is present: Chopin's C4 ledger lines are easily mistaken for note heads. This misread is present in the French first edition as well as most subsequent editions.

A notable exception is the Henle Urtext edition, which does not include the C#4 in m. 42. 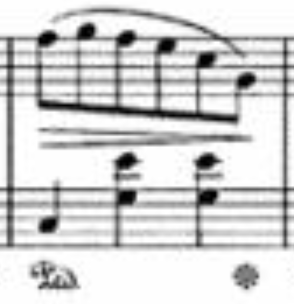 As Henle explains in their Critical Commentary:

Henle's edition is based primarily on the engraver's copy of the piece, which is held in a private collection, along with the French edition for comparison.

In short, Chopin used the two-note chord at every parallel occurrence except m. 42. Since the second autograph is consistent with the two-note version, and since there's no musical reason to include the C# only at that spot, the C# is an error.

The analysis is spot on, with one minor error: the final G# should be G#7.

19
Why do melodies have harmonies?
7
Question about playing chords
22
Ornamentation symbol consisting of two stacked slashes //
3
How to read accidentals in medieval music "modern" notation?
4
How to make a melody line more full and interesting (piano)?
3
Questions on the harmonic analysis of Pixar's Up Main Theme
0
cadences with triads with two different notes
11
How Do I Count Note Durations In These Bars?
2
What are letters in parentheses (no chords)?