Dm in the key of Em

I am trying to analyze the song 505 by Arctic Monkeys. And as many do, I went to Ultimate Guitar (UG) to look the chord progressions for the song. The song has only two chords, Dm and Em and UG mentions that the key of the song is Em. But I don't understand why there is a Dm chord in the key of Em. Is there a different concept in theory that I am missing? Could you please explain the role of Dm in the key of Em?

Having now listened to "505" by the Arctic Monkeys at least twice (thanks to this question), I'd even hazard to say that, strictly speaking, "505" is in E Phrygian and not (just) E minor. As far as I could tell, I didn't detect a single F♯ in the entire song, but I did detect some F naturals.

I wouldn't say the song is in D anything or A minor: I heard plenty of focus in the melody on E notes over Dm chords (and ♭vii-i-♭vii-i makes more sense to me as a chord progression than i-ii-i-ii does - at least I have heard VII-i-VII-i and i-♭II-♭vii-i before but not i-ii-i-ii), and the song consistently sounded like the Em chords sounded more resolved than the Dm chords to me.

As I mentioned above, the Dm chord in E Phrygian is a ♭vii chord, the closest thing you get to a VII chord in E Phrygian (instead of E Aeolian or traditional E minor). VII-i in traditional minor bears a striking resemblance to V-vi in the relative major (which is allowed in common practice period harmony). I'd say it's not a stretch to make ♭vii play a VII-like role.

(♭vii in minor-key music that also uses V and therefore the typical non-flattened 2nd scale degree can still be used; however, every instance of that I have heard so far in such a piece has the considerably more conservative ♭II play before ♭vii, thus preparing the flattened 2nd scale degree beforehand. One such example piece is "Under the Banner of the Duchy" from Bravely Default.)

I'd go as far as saying the song's in C major - except it never gets there.

The two chords, Dm and Em, both belong quite happily as diatonic chords in C, and all the notes sung are from that key also. The key signature would be that of C major - no sharps or flats - so it could be said that it's in any of the modes of C major, except finishing on either Dm or Em still doesn't make it sound like it's 'come home'. Dm gets closest, as Aaron states, but with only those two chords, it's almost impossible to analyse its key. But UG has it wrong. As it often does, I'm afraid.

By playing those two chords then playing a C chord, - try it - there feels like an ending.

The actual question is probably about bogus information found on some web site. All information about songs on such sites can be wrong, and you shouldn't trust it more than your ears. Chord charts, melody transcriptions, lyrics, author information, everything can be wrong. Even "official" published sheet music can be wrong, let alone internet databases.

But I'll answer the literal question that's in the title: how can there be a Dm chord in a song that's in Em.

This site is supposed to not have multiple instances of the same question. Yet this is asked about continuously and endlessly: "How can there be a non-diatonic note." And it's often accompanied by "what key is this song or progression in", but that's specifically not allowed. So people have to ask something slightly different, so that the answers will provide the key identification as a byproduct.

OK. Let's get beyond just chord names, and look at the whole song. If this copy is correct, both melody and chords seem to be in the key/mode call it what you will of 'all the white notes'. So we could potentially analyse it as being in any of the modes based on C major - D Dorian, E Phrygian, F Lydian etc. The melodic shape and harmonic rhythm add up to E Phrygian in this case.

Maybe the Monkeys thought in those terms when writing the song. Maybe they just noodled around on the white notes of a keyboard. Or something inbetween. 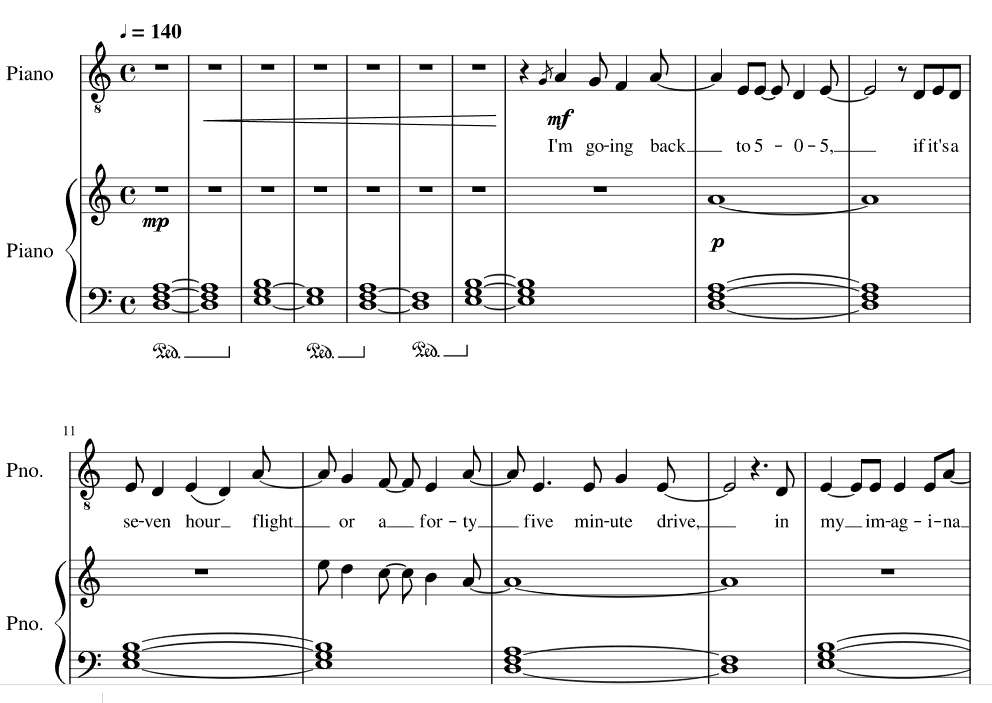 Ultimate Guitar is wrong about the key. The song is in D dorian. The reason for the error is likely that the final chord of the song is E minor. Typically the final chord of a song will be the key of that song, but not in this case. The ending is intentionally unresolved. The melody as well is constructed to be ambiguous, never quite resolving to D.

D minor, then, is the root chord and E minor is the "ii" chord.

10
Playing a song in a different key
10
Determining Key / Key Change / Chords?
3
What is the theory behind these minor chords becoming major?
4
Analyzing Hisaishi Joe's Song "Reprise"
6
Determining the seventh chords of a key
0
Guitar rif comparisons and similarities
7
Help understanding the chord analysis and key of song, "You Are" by Kem
9
Learning to identify Chords Progressions by ear
0
Does this song use chromatic mediant in G major? and what other music theory concepts this song's verse utilize