What does "j" mean in a chord symbol?

In a book of jazz trumpet duets (for Bb trumpets), I keep seeing chord symbols like "Fj" (shown below). I'm familiar with the various kinds of chord symbols (the various seventh chords, extensions, etc.), but I've never seen "j" before. What does it mean?

A clue to its meaning is given a few bars later, in the final measure of the piece. The trumpets are playing their A and E, respectively, with "Fj" indicated as the chord. E being the major seventh of F, it's clear the chord would be a major seventh chord. 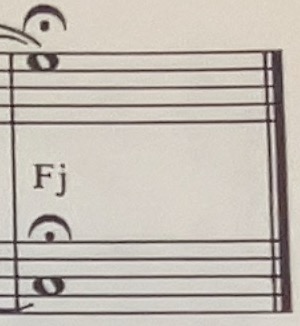 An even more clear example can be found on page 20 of the same book. As shown below, there is a progression "Dm Dmj Dm7". The second trumpet plays D, Db (C#), C respective to each chord symbol. In other words, the basic chord is D minor, with the second trumpet making a chromatic decent from ^8 to ^#7 to ^7. Thus, Dmj is D minor with a major seventh, or DmM7. 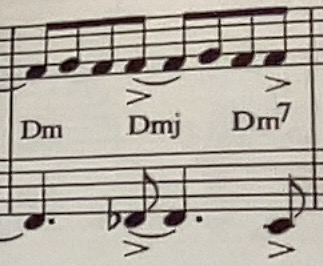