Does anyone have tips or tricks for remembering the function of mode harmony?

When I mean by that, I understand how the 7 modes are constructed:

Does anyone have tips or tricks for remembering the function of mode harmony?

My intention is to create chord progressions with Modal Interchange to create more color without any cheatsheet or just one-way Practice in 12 keys and remember day by day and stop using a cheatsheet — just use it for reference only and apply this concept as much as I can. Do you have any advice on this topic? or Would you share how you learn to pass through this obstacle?

TLDR; I don't think there is one. As others have already said, you can probably theoretically justify borrowing1 just about any chord.

Let's start by constructing a table of the modes and the 4 note chords that would be built from each scale degree. I'm using all caps roman numerals throughout, even though the case usually indicates chord quality, but it is much simpler if we just stick with the caps, and I didn't want to use numerals for the scale degree to help separate the scale degree from the chord qualities.

There are four types of chord: 7, -7, △ and the half diminished (-7b5 or ø7), and each of the twelve tones is used at least once as a chord root. I did this in Excel, which makes it really easy to generate another chart that will reduce this to a list of which chord types appear in the modes for each scale degree. Although the IV in Lydian is the #IV I am including only the enharmonic bV in this chart. 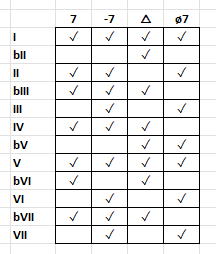 So, for I we encounter all four chord types, and for bII only the △, and so forth. I'm going to remove all of the non-scale tones (bII, bIII, etc) in a new chart, just to make it easier to point out something: 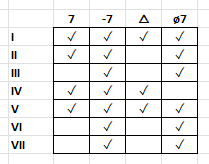 There are 28 combinations of scale degree and chord type, and about three quarters of them appear somewhere in a mode.

But notice that III7 doesn't appear in this chart. While I suppose it is technically true that E7 doesn't appear in any of the parallel modes in C*, it is arguably one of the most famous borrowed chords of all time. It's also a very legit sub for V7.

There are some other noticeable exclusions. bII7 isn't represented in the chords borrowed from modes, but is a common sub for V7 (which is), as in ii7-bII7-I instead of ii7-V7-I. IVø7 isn't in this chart, but is both quite groovy and also a fine sub for bII7 (which also isn't) or iiø7 (which is), and I commonly use IVø7-V7 as a more harmonically complex (and pleasing to me) alternative to V7sus-V7-I.

VII7 doesn't appear, and how many times have you heard B7-Em in key of C? III△ doesn't show up, but I'm pretty sure I could make that work (depending on context) for C+ or Cm/maj7.

I guess what I'm getting at is that if you are only looking at modes for borrowed chords, you're leaving out some other substitutions that are very common (probably more important than anything you'll get at this way), and if you start including chords that are borrowed with other methods, then you get into a situation where you can theoretically justify any chord whatsoever, and the more you do that, the more you reduce the utility of the cheat sheet (or mnemonic technique, or rule, or whatever you are creating).

And that's the thing. You can try out a chord indicated to you by some theoretical method, but they are all context dependent, some to a greater degree than others, and the theory of how they work isn't necessarily that indicative of whether or not you can pull them off in a practical setting, so there's really not that much point in trying to memorize all the possible permutations. A cheat sheet or such might not be feasible for practical application, especially if you expand it to cover all possibilities, but it is just fine for practice sessions, which is where you'll mostly be working through these ideas, anyway.

All that being said, here is a list of all of the chords used by scale degree in all of the modes. Whether or not you can pull off something like #IVø7 in place of the four chord3 is going to be up to your ears:

1 "borrowed" refers only to chords that appear in a parallel mode, if I remember correctly from my theory days. However, it seems to me that the term is used much more loosely in practice, for instance V/V relationships or in other cases where you appropriated a chord from a more (or less) related key

* I'm not sure if the source is V/vi or the V from the harmonic minor, or if this is even a settled question, or matters. Theory is kind of made up after the fact to explain things that were already happening

3 The two chords are almost identical: F-A-C-E vs F#-A-C-E. But if you were to substitute that into a I-IV-V in C, would the ear interpret that as an alteration of IV or as a V/V (C-D7-G7)? Same question if you borrow the II7 from Lydian. Will the ear interpret this as an altered II, or hear the V/V relationship, or some other possibility? It is all highly contextual.

Not certain where you're going, but...

I tend to think of modes as changes in/ adaptions of the parent key.

In other words, C Ionian has no change.

D Dorian uses all the notes/chords from C.

E Phrygian uses all the notes/chords from C.

F Lydian uses all the notes/chords from C.

G Mixolydian uses all the nots/chords from C.

A Aeolian uses all the notes/chords from C.

B Locrian - you have the idea, but Locrian is strange!

So I go back to the parent key, knowing the notes/chords from that key.

Seems easier, as we probably would have learnt the 'chord families' before we tackled modes.

One simple "trick" is to make use of the order of the modes.

Suppose we're composing in Mode A and want to know how the current chord corresponds to relative Mode B. We can use the following formula:

Example 1. Given the six chord in Mixolydian, what is the corresponding Roman numeral in Dorian?

Thus, the two chord of Dorian corresponds to the six chord of Mixolydian.

Example 2. How does the Lydian four chord correspond to the Locrian mode?

Thus, the four chord in Lydian corresponds to the one chord in Locrian.

Example 3. I'm currently in Phrygian and want to get to the four chord in Ionian. Which is the corresponding Phrygian chord?

So the Ionian Four chord corresponds to the Phrygian Two chord.

You have my permission to chromatically modify any chord in your song. You could almost certainly justify this as 'modal interchange'. The modified chord probably exists in SOME mode. Does it matter which one?

But if you want to label your alterations, I suggest you memorise and internalise the list of alterations stated in your question.

This should help you remember the modes in order.

To work out the alterations needed for the various modes in one tonic, I prefer to think of them in a "circle of modes" organized by the number of sharps and flats in the key signature.

It should help you remember the alterations and possibly help with "smoother" introduction of modal alterations. 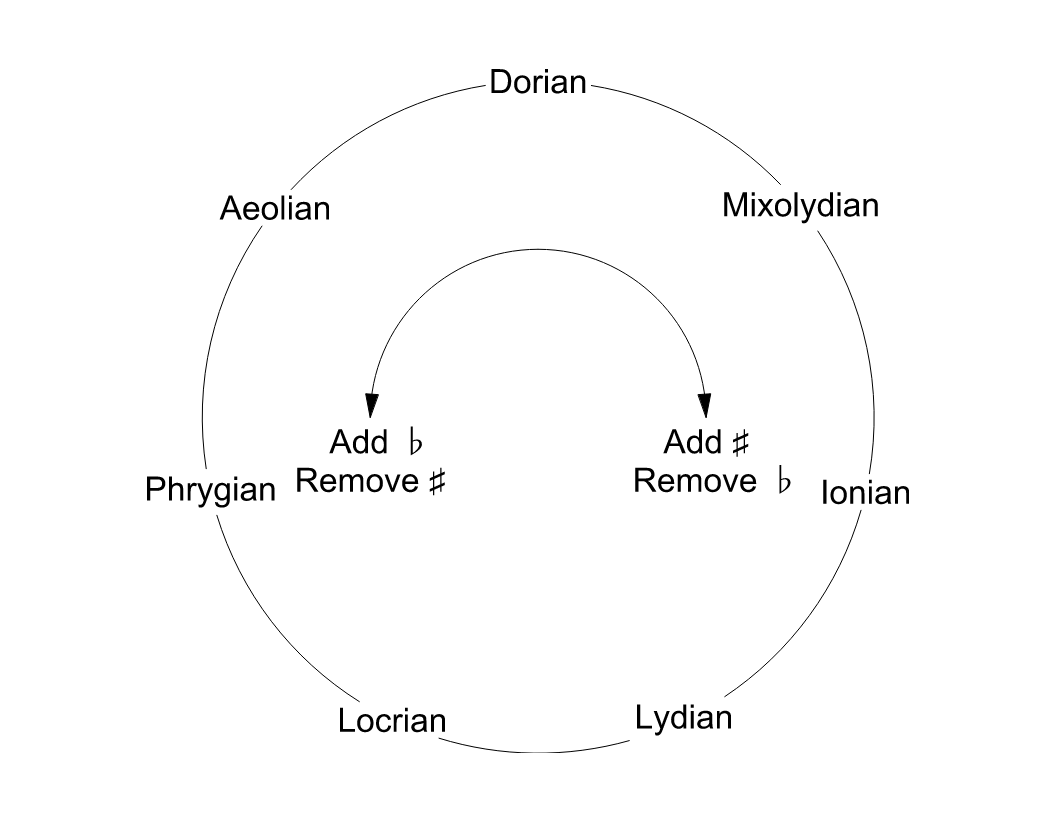 3
Does borrowing chords from a parallel mode change the key?
3
Is there such a thing as a Harmonic key besides for Harmonic Aeolian?
5
Are the 1,4,5 the primary chords in all modes?
9
Is Locrian a minor mode or is it a diminished mode?
5
Does this progression through the modes have a name?
2
Are there modes beyond Lydian?
1
What are historical and structural reasons for the prevalence of Major and Minor?
4
Categorizing modes of scales other than major scale
5
What is the lowered supertonic note called, especially in Phrygian and Locrian modes?