Another question for my amateur Shostakovich Symphony 11 arrangement for solo piano. The part I am asking about is 29:36 to 29:56 in this video, or rehearsal marks 80 to 82 in the original score. I'm ignoring the strings/woodwinds since pianists only have two hands, and I'll have the right hand play the higher brass chords while the left performs the trombone/tuba glissandi. Here's the extract in the original: 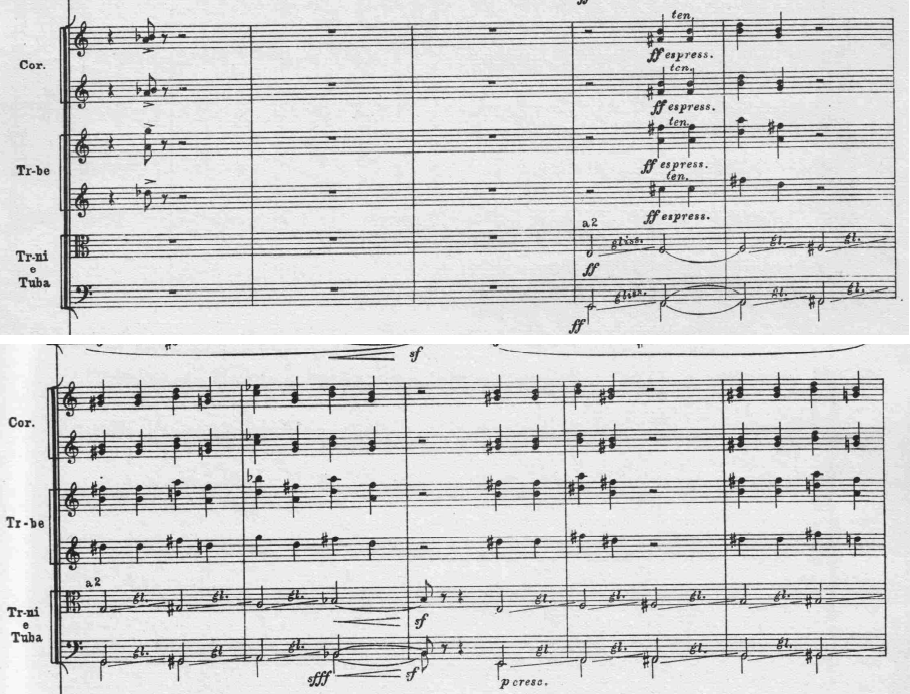 The low brass glissandi are a fun effect; it is continuous over a half-tone interval so microtonal if you want to play it exactly as written (doable for trombones, not so much the tubas, very much impossible for pianos). I've made chromatic grace note effects out of it: 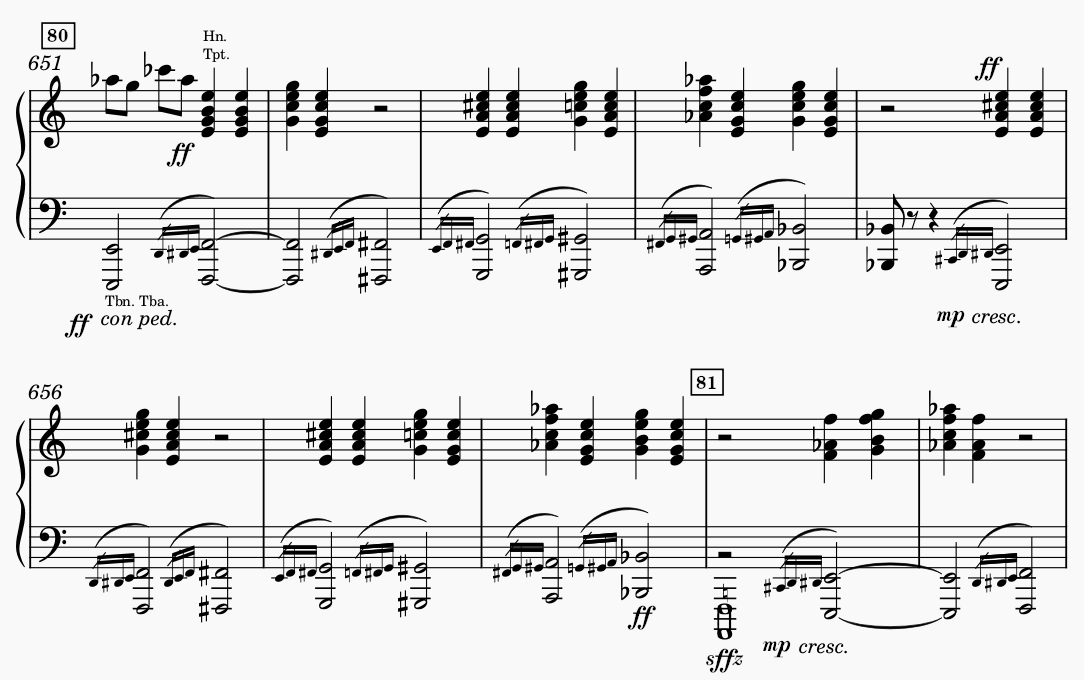 Now I am pretty satisfied but there's one effect heard in the recording, and in my mental version, that I'm not sure how to convey; the horn/trumpet chords are slightly disaligned with the trombone/tuba glissandi. Ignoring the glissandi parts and listening carefully to the beats on the natural notes E, F, F#, G, G#, A, Bb; in my experience they are at first slightly behind the horn/trumpet chords, and when the melody modulates they get slightly ahead of those chords. It's played asynchronously, arguably "messily", and I think that's both fitting in this section of the score and sounding very well.

Listening to different recordings you can see several approaches to this passage: synced - slightly out of sync - out of sync - very out of sync. So asynchronity is not totally unique to one recording. In any case, I think my arrangement should suggest it as an option, which I would put between parentheses to clarify that it is my instruction, not Shostakovich's.

How do I tell or suggest to the pianist to mimic that effect, to play it messily, asynchronously, like they are playing in the midst of the Russian Revolution (or the communist regime, depending on whom you ask), and everything is death and awful and the metronome doesn't matter because terror is everywhere.

Somehow I feel rubato doesn't cut it - it also doesn't usually mean asynchronity between the hands. Is there a fitting Italian term available, or should I just put all that context in an English footnote?

First, to address the direct question:

Somehow I feel rubato doesn't cut it - it also doesn't usually mean asynchronity between the hands. Is there a fitting Italian term available?...

Ad libitum, often abbreviated ad lib. is a common indication for giving the performer even more freedom than "rubato." It literally means "at will." While we use "ad lib" in other conversational contexts to talk about total improvisation—"I forgot my lines in the play so I ad libbed it"—as a score indication near some notes it would mean more like "play these notes, but don't feel to constrained by the exact timing" (or maybe even the exact order or pitches).

or should I just put all that context in an English footnote?

But yes. Absolutely. Any time that you feel strongly that you want something to come out a certain way, don't rely on a few words, especially that are not in the performer's vernacular language, just because you feel that you must stick to "traditional" markings. Ad lib. doesn't convey everything you're thinking, especially the extra-musical socio-political ideas. They're meaningful, and contribute to the performance. I might elaborate on the whole idea in a text introduction, and then mark the passage "Freely*" with an asterisk and then in a footnote, "* See introduction." I've seen scholarly editions use similar methods to call the performer's attention to issues like measures that differ in different sources, or complicated ornaments.

For that matter, you've already been forced to translate what was a steady-rising gliss into some very different chromatic-grace-note figures, just by the demands of the instrument. You could use the same introduction to explain that, just in case the performer has other ideas about how to replicate the feeling of the original.

10
Drum kit notation for crashes at section starts
2
How to notate an improvisation section around a theme?
6
Notation for a repeat section with 2 different beginnings
1
Is it Necessary to Follow Chord Instruction Above Grand Staff (Piano)?
0
Trouble feeling rhythm in section
11
Features of a Coda section
1
What fingers should I use to play this section?
1
My hand is too small to play a section of the piece
8
Can a double bar line begin a repeated section?
1
How to play Swallowtail Jig on viola (beginner level)