Are these 2 clef-change notations equivalent in meaning and result?

I've been copying over my purchased PDF of John Adams's score for "China Gates" into a new MuseScore copy for my personal use. There are frequent clef changes which he notates in this manner throughout the score: 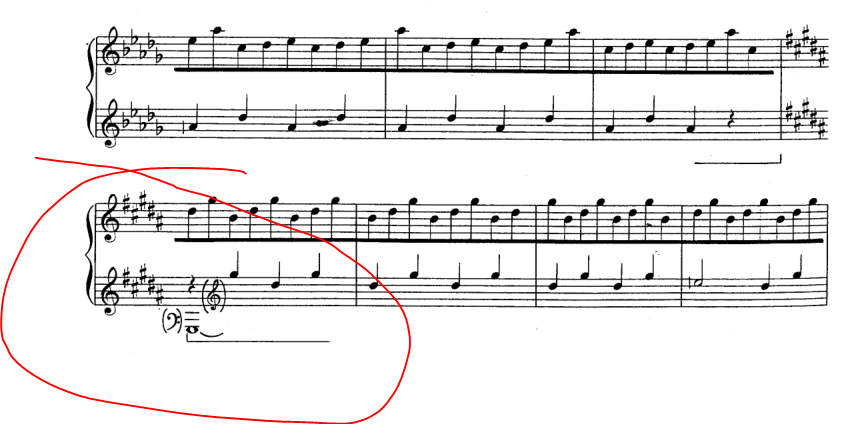 I'd like to notate it slightly differently for ease, and, at least for myself, easier to read. Like this:

In playing back the segments with MuseScore, I can't tell any difference in the sound. Are these in fact equivalent?

Yes they are equivalent, and you found a better way to notate it. Whoever made the original notation (whether John Adam or the publisher) could very well think "why didn't I think of that. It is so simple" when seeing your solution.

Yes, these are equivalent in this case. What is given in this score is not a change of clef but rather multiple clefs for multiple voices in the same staff. The advantage of doing so is that you save a lot of disrupting clef changes if you were to do it properly. The solution given here has two issues that overcomplicate things:

First that G clef is not at all necessary! Placing the F clef next to the second voice strongly implies that this clef only affects this voice. Thus we can omit the G clef. And second: In this case I think the second voice of the left hand is supposed to be read in bass clef all throughout the piece. Thus the parentheses would be meant as saying "this is just a reminder". But adding parentheses to "reminders" is a bit stupid, because you not only add the instructions, but you even make them wider and more prominent (and at the same time more confusing).

For comparison your way:

and the original notation: 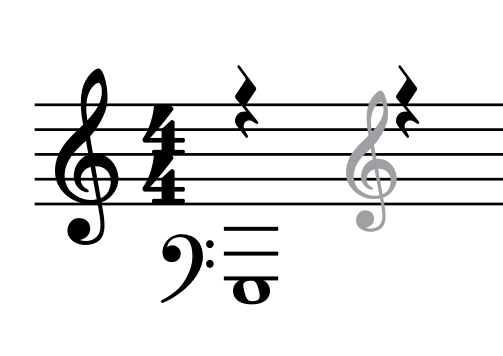 Yes. Were I playing from the MuseScore version, I would execute it the same way I would were I given the original.

In the original, it's understood that the lowest notes are in bass clef, but the parenthetical "courtesy clef" offers a visual reminder. However, since it is nevertheless a change in clef, the "courtesy" treble clef clarifies the return to that clef.

In the MuseScore version, the "warning" clef at the end of the first system serves the same purpose as the "courtesy" clef in the original, but the "real" treble clef becomes necessary to make clear the return to a treble staff.

10
Do the F clef and G clef always reside on the same line?
2
Are these dotted and tied rhythms equivalent?
4
Does a key signature remain the same after a clef change?
4
Why have a clef change right after a previous clef?
0
Is the bass clef the same thing as a question mark? How are they related?
4
The proper way to mark sustain pedal for MuseScore playback and live performer?
9
Notating a note sustained over clef change
5
8va or clef change?