Do pianos have a generally recognized "bass register"?

Playing the piano, I've noticed the notes under a certain note seem to be voiced more for heavy chords instead of melodies/countermelodies. If you try to play complicated lines under that note, They will sound muddy unless you put a lot of work into it. Is there a generally recognized 'split' amongst piano makers where the notes above a certain note are made for melody, and the ones under it are for big heavy chords? I've noticed it seems to be somewhere in the 3rd octave, usually.

No, there’s no generally recognized split point — by manufacturers or musicians.

Early pianos, up until at mid 1800s at least, had three very distinct registers, each with starkly different timbres. Even then, those regions depended on the particular design, and they were generally considered a flaw in the instrument, and the elimination of such clear timbral boundaries is a design goal in modern instruments.

Closely voiced chords are generally muddy in the piano’s lower range, so open, arpeggiated, and/or incomplete voicings are characteristic.

Although the low range is not rigidly defined, avoiding close voicing in the lowest three octaves is a reasonable rule of thumb.

One element of answer might be the number of strings behind the different keys.

The separation between these areas varies depending on the manufacture of the piano.

Adding to Aaron: Every piano on earth is an individual instrument and will be voiced individually by manufacturers and technicians. Often this depends on the preferences of the pianist or the purpose of the instrument.

But the contrabass register sounding muddy is not fully due to intonation. Pitch is alwas a compromise of string length, string tension and string weight. The length of the strings is limited by the size of the piano. This means that low notes need to compensate by lowering the tension or in heavier strings. Both of this will affect the overtone spectrum and the inharmonicity, resulting in a muddy and not very harmonic sound. But if you listen to the really big concert grands (like let’s say the 2,9m long Bösendorfer Imperial) you will hear that these bass notes have a much different sound. They are still contrabass register and thus generally be less melodic than tenor or alto.

One visible separation of piano registers is the one between the $F$ staff and the $G$ staff, i.e. the middle $C$. Then in the left half we may further distinguish between the part where chords are still possible, and the low-end part where only an octave doubling is possible.

Chords with thirds played in a too low register sound muddy. That's not specific to the piano: chords played in a low register at the orchestra also sound muddy, and this happens already at a higher register than with a piano. It is known that when transposing for orchestra some piano composition, one should be careful about that: low chords have to be voiced with more space than on the piano.

Low notes sound muddy even alone. Our ear has not much sensitivity to low frequencies, and hence recognizes low notes partly by their harmonics. So a way to get clearer notes in a low register is to have a timbre that contains many high-frequency harmonics. This is typically done on the organ with mixtures, and on the orchestra with instruments doubling at the octave.
On the piano, the low notes cannot be as heavy and tight as they should be to get a clear-sounding timbre. That's something that can be experimented when tuning a piano or a guitar or an harpsichord: when the string tension is too low, the sound is muddy. It seems to contain more fundamental sound than harmonics, and some part of the high frequency spectrum is actually not harmonics of the fundamental. You get better notes with augmenting the length and tension of the string - which explains why small instruments sound muddier.

As a final note, Beethoven has a particular way of using the piano low range: he often puts chords in the low-middle part of the instrument, where other composers do not. This gives a recognizable timbre to some of his piano pieces. However the pianos Beethoven used to play were quite different from our modern instruments.

In the end it boils down to frequency and perception.

Let's have a look at the chart of Bob Katz, an audio engineer from the USA for the mastering step, which he adapted to the famous Carnegie Hall diagram: 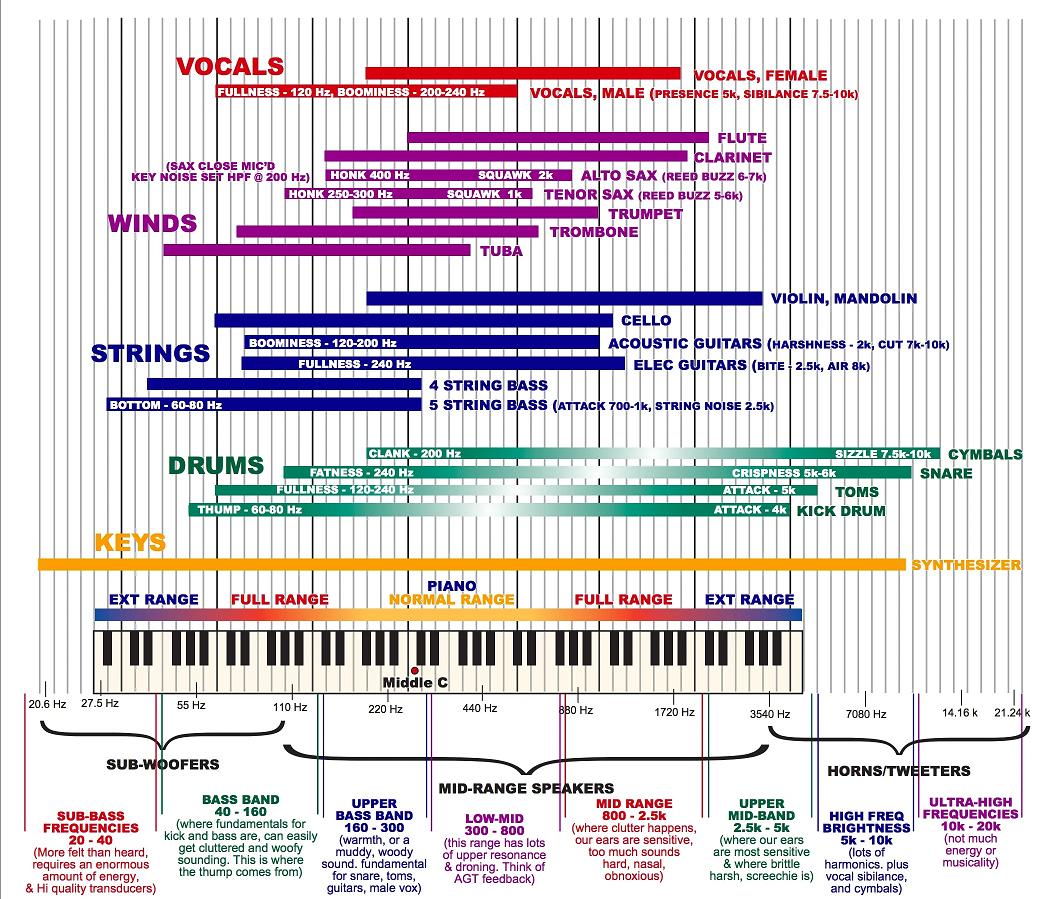 He also noted down perceptual effects. I.e. our ears and our mind is designed to perceive and differentiate higher sounds more easily.

So the separation of chord-notes depends on the kind of effect you want to convey. E.g.

And of course, we talk about sound. So take constructively into account the effects from pedal/damping. E.g. I almost always prefer damper on all the time on our piano, as I like that sound more. But that's my preference for the kind of music I play.

25
Why do standard modern pianos have 88 keys?
50
How to know what notes will go together while improvising?
26
Why does a piano have only one or two strings per note in the bass register, but three for other registers?
25
The difference between self-taught and professional pianists
7
Why do pianos have piano hinges?
4
What should a good acoustic piano feel like?
4
Writing interesting accompaniment rhythms
5
What exercises might one do to truly master one's playing of a song?
23
Why do many acoustic pianos have a wooden block to the left of the keys?