In Mazeppa, 4th étude of Liszt, there is cadenza ad libitum: does this mean I can compose my own cadenza, as in Mozart etc ? or that I can play those scales as many times as I want ?

In Liszt's Rhapsodie hongroise 2, there is also this cadenza ad libitum, suggesting that in Mazeppa too the pianist can introduce his/her own cadenza. However here, it's at the beginning: does this mean that there are specific constraints ? 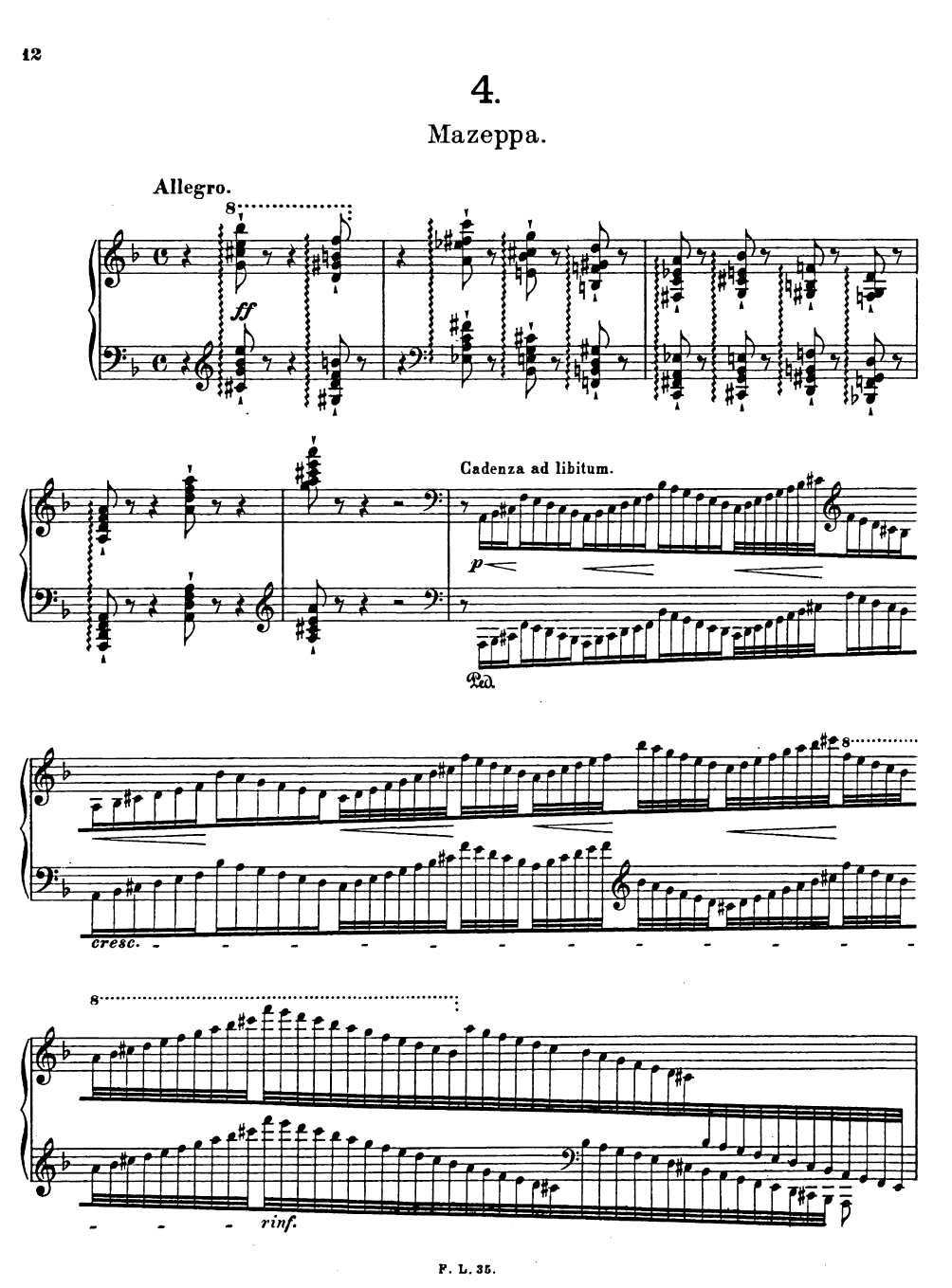 Of course, you can do whatever you want, but given the fact that Liszt has provided a very extensive set of notes for this cadenza, I think it's rather more likely that this means cadenza, tempo ad libitum, or however that should be in correctly declined Latin. In other words, play the notes as written but observe their time value even less strictly than usual.

Still, I suppose Liszt wouldn't have objected to some compositional variation or embellishment of the given notes.

I couldn't find a manuscript image online, but if an autograph source for this piece exists it would be nice to know whether "cadenza ad libitum" appears there in Liszt's handwriting.

The fact that this cadenza occurs early in the piece probably does not imply any different constraints on its execution. If Liszt had wanted it to be approached differently from a cadenza in a more conventional part of the piece he probably wouldn't have used the word "cadenza."

As far as I know "Cadenza ad libitum" was not used in the sense of "play what you like", but rather in the sense of "you may play this cadence if you like, but you can also omit it". If you speak German consider this entry in Koch’s musical lexicon:

Ad libitum, indication, abbreviated ad lib., at will, arbitrarily, [...] In Concerts Cadenza ad libit., the soloist may play a cadenza or may refrain from doing so.

I agree with phoog's answer but want to expand it a bit. There are really three different questions here:

Let's address them in reverse order. Liszt was a celebrated improviser. His performances included not only titled pieces but periods set aside for improvisation, taking suggestions from the audience of well-known themes to work into his performance, somewhat like improv comedy. Many of his written compositions are "rhapsodies" and "fantasies," creating an allusion to improvisation even in written works. Leon Botstein writes,

Musical composition for Liszt began and remained tied to the musical event as a performative experience .... The goal represented by a fully worked-out, permanent composition did not sit well with Liszt, whose habits and experience as a performer led him to appreciate the wide divergences in the actual perception of and response to music. Liszt constantly revised his music and updated it. Liszt's fusion of performance and composition suggest that his written texts cannot be seen so much as a stable account of authorial claims but rather as a script whose full realization in the moment of performance demanded, for him, adaptation, revision, and extension, all in accord with the novelty and uniqueness of the historical moment.

That certainly sounds as though, if you chose to make your own alterations to his work, the ghost of Liszt would not object "But that's not what I wrote!" (Though living listeners might not be so generous.)

To the middle question: Would Liszt have expected you to discard his cadenza and write your own? There's a book that looks to be very valuable to this conversation, Fantasies of Improvisation: Free Playing in Nineteenth-century Music by Dana Andrew Gooley. In a footnote on p. 22, he sums up research into how people were approaching cadenzas in the 19th century. For concerti, at least, the expectation that the performer would provide their own was largely extinct. Yet he mentions a consideration of "short cadenzas—fermata elaborations" that were "historically residual," and as you point out, Liszt's Hungarian Rhapsody No. 2 sports a clear "bring-your-own-cadenza" meaning of cadenza ad libitum. But Gooley points out that even as early as 1804 the Paris Conservatory piano manual says that "modern composers ordinarily write them out," so the Hungarian Rhapsody is more of an anomaly.

So, with Liszt's precedence and improvisatory character, one certainly could substitute their own cadenza, but one shouldn't feel that it's expected or required in this instance. So what does the ad libitum actually mean? In this case, with a notated cadenza, the reasonable reading is that it emphasizes interpretive freedom; that Liszt wants to make sure you don't just rattle through the giant string of 16th and 32nd notes inflexibly, but give them some fluidity in timing. So it's not quite the meaning of cadenza ad libitum that you find in a Mozart concerto—"Feel free to put a cadenza here"—but rather "This is the cadenza; do it freely."

The only restrictions are that whatever you play will follow the harmonic sequence, if indeed there is one.

Liszt may well not have played the same cadenza twice (why would/should he?) but must have written out one for those of us who are mere mortals. Thus immortalising it!

So, if you can't come up with something just as good, (better?!) then stick to what's written, otherwise keep it just as Liszt would probably have wanted - as writ.

Play what it says. Interpret the rhythm flexibly.

'Cadenza ad libitum' might mean other things in other circumstances. But that's what it means here.

5
What is this chord (spelled 2nd, 4th, 5th) and how is it used?
6
Writing a Mozart-style cadenza
6
Glissandos in Prokofiev's Piano Concerto No.3 Mov.3
6
How much of a solo by a great pianist is licks and how much is melodic innovation?
1
What materials did famous composers use for their daily piano and/or violin warm-ups?
1
How to get a satisfactory ending to a Theme and Variations?
2
Are there existing paganini no. 1 caprices for piano?
6
How broad arpeggiated chords are reasonable?
4
How to write a trombone cadenza?