How would you identify the root of a non-standard chord / cluster?

What are some ways to identify the root of a chord? I know Hindemith has a treatise on this, but are there any other convincing ones?

For instance, what would be the root of these chords?

How would you know?

In every case, it depends on the context in which the chord appears and how it's used.

Any set of notes that appears in a non-tonal context can't be said to have a root in the first place, since having a root is a property of tonality.

In a tonal context, F-B-C could just be a passing chord between, say G7 and C. This is actually pretty common. Mozart uses a version of this a lot. For example, here's an excerpt from his first piano sonata, second movement: 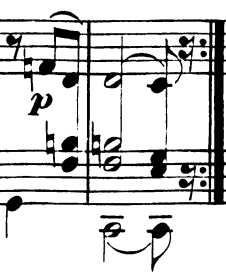 On the other hand, the same F-B-C chord could be an F chord with the B delaying the arrival of A.

Or, any of the pitches might be a pedal tone while the other two form the outline of a chord: FM/B, Fm/B, CM7/F, G7/C, for example.

And all of this assumes none of the pitches are spelled enharmonically. C-E#-B could be interpreted quite differently from C-F-G.

The root of a chord cannot be determined out of context.

With chords that fit neatly into the "stack of thirds" theory that underlies Tonality, there is a default interpretation for major and minor chords and many seventh chords. C-E-G will be seen as C major, and F-A-Eb will be seen as F7, at least most of the time. And some "non-standard" chords — like C-F-G, which would be assumed as Csus4 — also have a "default" interpretation.

But even augmented and diminished chords already become "fuzzy", because their roots depend on context. And for chords that do not readily fit the "stack of thirds" theory, all bets are off.

Hindemith deviced his own harmonic theory that was supposed to stand against the concept of atonality (Schönberg being his arch nemesis ...), so each chromatic note can be seen as tonally related to each other one, and each accumulation of at least 3 notes is a chord with one unique root. Hindemith’s theory rids itself from certain assumptions made in more conventional harmonic theory, such like for example that chords are stable against inversion.

The problem though with this theory is that while in theory in works it does not do a particularly good job in actually producing intuitive results.

There is a bunch of systems for determining roots, if you speak German there is a nice summary by Karl Traugott Goldbach: https://www.gmth.de/zeitschrift/artikel/446.aspx

But keep in mind that a root of a chord is always an arbitrary classification of a bunch of notes, and none of these systems will work unconditionally.

It depends on context.

Is that Am7 or C(add6)? There's no right answer. It's whichever you choose to use it as.

2
Formal definition of an inverted chord
1
Constructing a database of complete music theory?

13
How do you write successive, non-functional chord progressions?
6
Major Seventh chord with root note as melody : why the dissonance?
11
How does it make sense to leave the root out of a chord?
8
Is 'fundamental frequency' the same thing as 'fundamental bass' (chord root?)
10
What is the strict definition of any chord in the world?
1
How to identify the chord progression and a specific chord
3
Writing characteristic chord progressions in inversion, & doubling notes other than the root
4
A chord with only the root note
7
What is the physical mechanism by which a chord has a root?
2
How do I identify chord scales? (Chord scale theory)