Recently played a gig where I didn't need my own electric piano, as there was a good quality (in tune!) acoustic upright. Had all sorts of problems micing it to compete with guitar/bass amps and drums, no surprise there.

Couldn't get the mic (just one, SM58) into the piano with the top open, so it ended up just above said piano. Not satisfactory. Piano was jammed against a wall, which probably didn't help. (It certainly didn't help me - back to everyone, players and audience!).

Question - what would have been the best mic placing? Move the piano away from the wall; mic somewhere at the back, where? Under the keyboard, or where? Got another gig at the same venue soon, and would like to go armed with a good solution!

Micing upright pianos is hard because of the limited space available. The usual way is to take the panels off and use a stereo micing technique with some distance. But that won't work on a live stage, especially with drums, electric guitar, and electric bass, because of the ambient noise levels.

The two main problems with sticking stereo microphones into the piano are that if the mics are too far apart, you get a nice stereo image, but a "hole" in the middle, whereas if they are closer together, you are losing the higher and lower registers.

If you try to compensate this by sticking even more mics into the piano, you invariably get problems with phasing.

However, if you know what registers you are going to play in and what kind of sound you want to achieve, you can use this to your advantage.

For example, in your case, you mention having a bass player. That means you are probably not going to use the bass register much, and even if you do, having it not being picked up by the mics as much might actually be an advantage, since it "cleans up" the low end of the mix by not interfering with the bass and the kick drum. (There's nothing worse than a keyboard player with an overenthusiastic left hand in a band that also includes bass!)

In your case, I believe that a pair of small-diaphragm omnidirectional condenser mics about 50 cm apart, about 10cm inside the lid, slightly right of center might be a good compromise. It will give you a quieter bass sound but still pick up the middle and high registers for harmonies and solos.

I only ever had to mic an upright once, for a live performance of a big band during an electroswing party. In that case, I did pretty much what I described above, except I didn't have omnidirectional mics at hand.

I used a pair of cheap Chinese clones of the dpa 4099 supercardioid small-diaphragm condenser without any of the clips. I simply taped the goosenecks to the inside of the front panel. 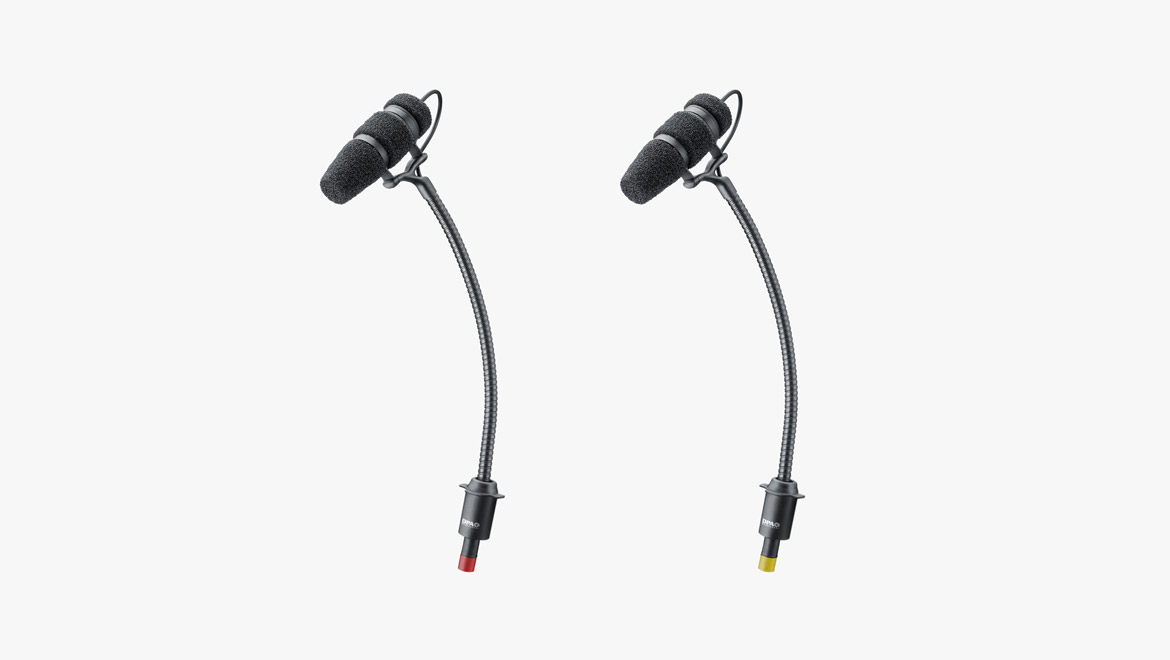 An alternative might be to tape two pressure zone mics such as my favorite Shure Beta 91A to the inside of the front panel or to the underside of the lid.

Micing the soundboard from the back is also very nice (a pair of the classic Shure SM57 would work very well here, as would any of the ones you would normally use as an alternative, e.g. Shure SM58, Sennheiser MD421, …), but obviously requires access to the back of the piano (and not just access but enough room to not catch any unwanted reflections from the wall).

You've got one SM58 and a piano against a wall? Drop it down the back, to hang slightly to the treble end of centre. If it clanks, wrap in a bit of foam. If you can pull the piano out far enough to get a mic stand in, point it at the soundboard at the position mentioned.

That's the best you're going to get with those resources, and won't actually sound too bad!

Maybe you should have taken your electric instrument in anyway!

The best solution, by far, would be to tape a pressure-zone (boundary) microphone to the wall directly behind the piano. Position it about 1/3 of the way down from the high register of the piano. Put the piano about 6" from the wall. You'll get a nice, even pickup from the top half of the instrument, and a natural roll-off in the bass register that the bass player will appreciate. Isolation, especially for an acoustic gig, should be excellent.

You can accomplish something similar by taping a small-diaphragm condenser (even a lavalier mic) directly to the wall. This effectively turns the element into a boundary mic on the wall, and it works with omni and directional patterns. If you have a directional lavalier, position it near the middle of the sound board and point it toward the top register. You'll still get plenty of bass from the mic's off-axis pickup.

Finally, even your SM58 will act like a boundary microphone if placed parallel to the wall. This isn't optimum, but it works. You could use gaffer's tape or a stand to hold it behind the piano, hugging the wall, positioned near the middle and pointed toward the upper register. Take the pop filter off so you can get the element closer to the wall.

Though the sound isn't as good, you can get a similar boundary effect by taping a lavalier or small-diaphragm condenser to the bottom of the lid and closing it. If directional, cheat the mic toward the bass register and point it toward the top. If omni, place it about 1/3 of the way in from the right.

23
How do I begin finally making music on the piano?
0
What type of mic for use with vocals from an electric guitar amp?
4
For recording vocal and piano, how to position microphones of the "pocket studio" recorder?
7
How to mic an upright piano to record singing and playing?
1
Samson go mic or blue snowball
0
Sitting position for 61 key piano
6
Upright Piano action problems
18
Piano exercises post-chemotherapy
2
Best way to connect a decent vocal mic to an Android phone
1
Make mic sound stronger