Should the notes be *kept* or *replayed* in this score of Moldau?

In this score of Moldau (called also Vltava), by Smetana, arranged for piano by Lothar Lechner (edition Schott), should the notes circled in blue be kept or replayed at each measure ? 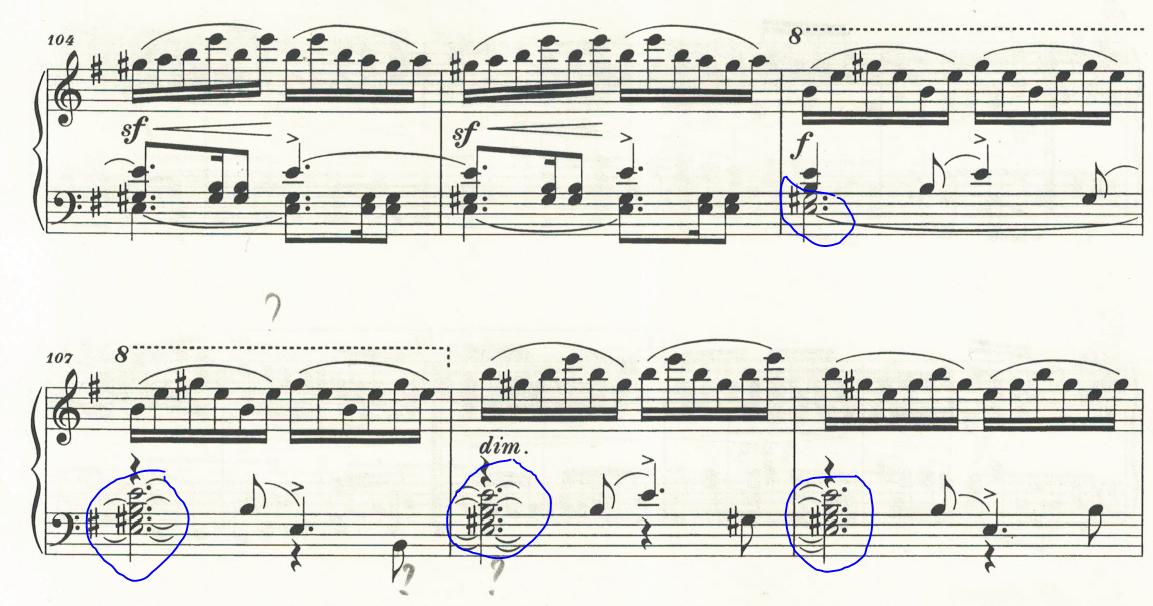 The effect is intended to be a long sounding chord. How to make this happen depends on the instrument, e.g.:

On a piano (depending on the model) it can be difficult to sustain (pedal) AND not-sustain (other voices) at the same time, so the effect may require some mix of longer decay (hit chord notes harder) and repetition, or split of piano (second pianist).

The arranger really needed three staves to show what's going on here. It's hard to pick out the melody, which is played by horns and low winds in the original:

If you look at the low B at the end of bar 107 in your picture, you'll see that, although it hasn't got a tie coming from it, the following chord has that B tied to it. And so has the chord in the last bar. The arranger is giving you a lot of information! That's useful in an orchestral reduction, but in an arrangement it might be a bit too much.

In other words, some of the G-sharps and B's in the dotted minim chords are part of the melody and could (with three staves) be written as crotchets.

Here are bars 107-9 showing how Smetana uses the horns to animate the E chord while also sustaining it.

It's a piano transcription, so liberties have to sometimes be taken.

However, with the advent of the sostenuto pedal, found on a lot of pianos on the West of the Atlantic - much rarer in Europe - if pressed as those notes are played, those notes will continue to sound, while others played after will not. At least until the player plays them again.

Having said that, most of those bars are arpeggiated chords, so using the sustain pedal throughout, changing when appropriate, won't go too far amiss, as all the notes will blend into good sounding chords.

It's clear that the chord is not intended to be replayed at the beginning of each bar.

It is tempting to suggest using the sostenuto pedal (if available) - the one which 'latches' the notes being played when it's depressed but doesn't affect subsequent ones.

What would sound different with the sostenuto pedal compared with the sustain one? The low B - not included in the held chord would be more distinct. The RH notes would not be sustained.

The arranger should have been more specific.

The notes are tied, so they are not repeated. Most likely you’re supposed to use pedal here and keep the notes ringing. This sort of notation (with the ties being shortened) is used to avoid the measure being filled with ties, leaving no space for the other notes. This type of notation is not entirely uncommon.