Cb and Eb in C minor

I'm working on Beethoven's Sonata no 5

I passed by this 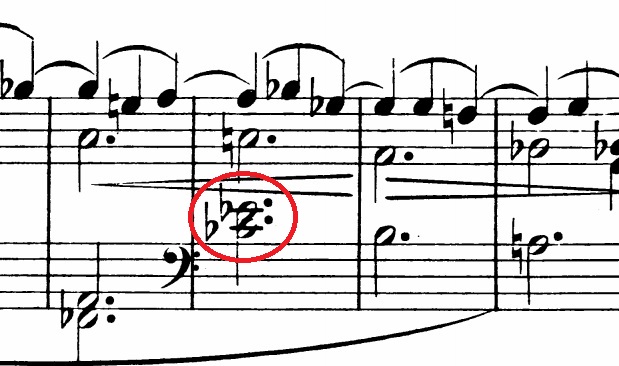 I can't figure out how the C and E are flat, as Cb is a B and E is already Flat according to the C minor scale

Am I doing something wrong here ?

This chord is known as a German Augmented Sixth Chord. There are a few types of Augmented Sixth Chords. The German Aug6 chord is enharmonically equivalent to a Dominant 7 chord, as Tim mentioned. The core of the Aug6 chord is the augmented sixth interval, Cb to A in the above example, and is built starting on b6. The tonic is the third note that makes up the core, Eb in the example. These 3 pieces, b6, tonic and #4, are known as an Italian Augmented 6th Chord. Add degree 2, would be F in the above example (which is also in there but more of a suspension), and it is a French Aug6. The Gb added on top of the core makes it a German Aug6.

These chords are used as a predominant. b6 and #4 both want to resolve to 5. The tonic steps down to the leading tone. The GerAug6 usually passes through I6/4 to avoid the parallel fifths.

Beethoven is cleverly employing the Aug6 here, no surprise. In the example an F is suspended from the previous measure, like a FrAug6, then the voice steps up to Gb, making it a GerAug6. Finally, the Gb moves to Eb, leaving an ItAug6. Though the Gb is still implied, it does not need the same sort of resolution, ie passing through I6/4. In the next measure Beethoven takes one voice away, making it a 3 part harmony, and suspends the Eb until the last beat. It's hard to tell from the example how it resolves from there but it doesn't look like it's going to the expected/implied tonic. Beethoven being awesome.

The b is a courtesy accidental because of the E natural in the previous measure, even though it was up an octave. Not completely necessary but it helps avoid confusion for advanced readers.

There was absolutely no need for the Es to have a flat sign. In the previous bar, they were natural, and the bar line would make the Eb stand again, as in the key signature.This is something found in lots of music - the composer being kind and reminding us.

The Cb, however, is the same note as a B, but technically must be written as a Cb.If written as a B natural, it will sound exactly the same, but wouldn't be right for the chord spelling. I think the chord is a Cb dominant 7, but if I'm right, the A natural should have been written as a Bbb.

No doubt other contributors will enlighten us !

In the previous bar, you can see that the E is natural for that bar. On the next bar Beethoven makes it again Eb, that's why you see the flat there.

For the Cb thing,take a look at this thread:

Purpose of double-sharps and double-flats

It's pretty similar. An example to make you understand it is: isn't G double sharp an A?

Not the answer you're looking for? Browse other questions tagged theory beethoven or ask your own question.

77
Purpose of double-sharps and double-flats?