Should I look at the fretboard while I play guitar?

Is it a bad thing to constantly look at the frets while playing? Sometimes I find myself curved over a body of the guitar so much that my neck starts to hurt.

It seems that some experienced players do not look at frets at all, while others do. Here is a great musician, for example, that looks at the frets so closely that it just doesn't look right:

Should I get rid of this habit and try playing "blind" by not looking at the frets? Will it give me some advantage?

If you feel comfortable looking at the frets I don't see any reason not to.

Much of the time, the more experienced the player, the more well developed their muscle memory/technique/knowledge of the instrument/personal style is, this gives them much more freedom to be aware of what going on around them; they are also partially trained to do this from spending much time playing with other players on and off stage; any band situation requires a certain amount of awareness of what the other players are doing.

The crux of it is; the more you know the instrument and the music your playing; the less you will look at the fret-board; deciding not to look at the fret board is not something you should have to do consciously, it will happen naturally as experience and confidence grow.

In the case of the guy in your link; he is clearly concentrating on not making a mistake; it would be interesting to see a clip of him on-stage or in another band type situation.

Looking at the frets is not a bad thing, but when performing, you should limit this because you will get more contact with the audience when looking around. Then it will be more of a performance to the audience, and the audience will feel that you perform for them. Otherwise they would probably just as well listen to a recording.

Probably everyone looks more or less at the frets when practicing and learning new stuff, but when you are going to perform on stage, you should learn the material well enough so you don't have to look.

If your neck starts to hurt, it might be that you are too tense. Try to relax your shoulders when playing, and sit with your back straight. Your fretting hand will be at a sharper angle to the fret-board, but it will not strain your neck so much.

For classical guitarists, it is more common to look at the fretboard, even in concert.

If you practice sitting down, you probably will look at the neck more than you would standing up, because the neck is right near your face when you're sitting down.

I would practice standing up, especially if your going to be gigging one day - you want to get used to playing like that.

Playing standing up will probably help your neck and back from getting as sore (I know my back gets sore when I play sitting down) and you will probably not tend to look at the neck as much (once you're comfortable with the material you're playing).

If you want to play with others in a band you can't spend all your time looking at your hands, you need to look at your band mates to communicate. Little nods and mouthed words can go a long way when practicing, recording, or on stage.

Also if you want to make a connection with the audience you need to be able to look out into the crowd from time to time.

So whilst I don't see a problem with looking at your hands, you need to be comfortable enough to look around too. 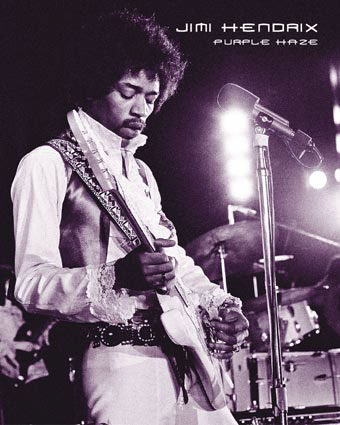 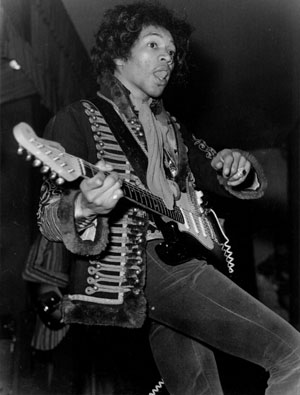 When I first started, I would find myself constantly following my fingers on the fretboard. When I tried to look up, I'd miss notes. As time went on, though, I began to get the hang of it. I still do it a lot when I'm practicing, especially if I'm sitting down, but I've gotten better now so that, when I'm on stage, I look up at the audience at least every now and then. I find it hard to believe that most guitarists never look at the fretboard; I haven't met many people who could play a very intricate guitar solo without watching their fingers for most or all of it.

There are some good tips here for minimizing it, though. One more I'd like to add is playing blind. After you've practiced a lick or progression, try playing it looking up. Then try playing it with your eyes closed. It can be hard, but it's helped me to find my way around the fretboard.

When you first start playing you will have to look where your hands are. But the more you play the more you'll just instinctively know where they are which will allow you to look up and around.

So keep practising those songs until you don't even have to think about where your hands are.

Although it would be best NOT to look at the hands while playing, in some part of the initial stages of learning and in some cases later on, this 'peeking' will occur (and maybe NEEDs to occur).

However, there are many reasons NOT to look at the hands, and to train not to look:

Firstly, if you ever plan to be able to read music and perform it at the same time, you will NEED to look at the sheet music, and not your hands (comparison: when you type on a computer keyboard, you look at the screen to see what you're writing -- not at your fingers/hands).

Secondly, as the old expression goes 'the hand is quicker than the eye'; you actually cannot fully 'see' what you're playing. This is due to the angle that you're viewing from, and the resulting parallax, and to the obscuring/shadowing of your own hand. You can't often see directly at all, or quick enough, where your fingertips are. You kind of have to 'figure out' which fingers are pressing (stopping) which strings, and which fingers are muting. This may actually slow you down. The only real use of looking (or as it should be called in this case, 'glancing'), is during large position changes up or down the fingerboard. If you are performing on a stage or studio with lighting issues (either in your eyes, or too damn dark), you could 'get lost' or panic at the sudden inability to look at your hands. Getting to the point that you can sense with your fingers 'where you are' should be a target, and will usually end-up being faster.

Thirdly, one of the goals of playing music is to figuratively 'erase' the instument from being in-the-way between what's in your mind and the music that ultimately comes out -- what you want the sound and ideas conveyed to be. This can never really be attained, but can only be approached since all instruments have physical limits (the voice also of course has limits; for instance you may 'want' to sing a super high or low note, but the physical properties of your voice won't allow it to happen). If you do not have to look at your hands, you can more easily feel or 'see' the notes, and to focus on, or 'look at', the sound.

Now, yes, there're a ton of successful pros out there -- mostly in the popular music genres -- that seem to look a lot at their hands. You then may say 'hey, if they are doing it, it must be right/okay'. But these people more likely became pros and successful DESPITE looking at their hands, and not because of it. Finally, what about those fanstastic blind musicians who cannot look at their hands? They are proof that there's no need to look at your hands -- ultimately. You have sight, so yes, use it, but use it where it's most useful. This doesn't mean never looking at your hands, but to only look when it's TRULY needed (and this won't end up being often). When you walk down the street, you don't stare at your feet, you look ahead and at other things, maybe only glancing now and then directly at your feet.

This is the very last thing to worry about. I have had this question from students who typically adults. Adults worry and over think things that are totally irrelevant to playing a guitar. Learn how to play songs and enjoy yourself and you will be the person people will look at and wonder how you play all those notes without looking at your guitar.

depends on what type of music you're playing, really. Take this for example:

with all that jumping around the fretboard, I don't see why anyone should make extra work for themselfes by not looking at the fretboard. I think it doesn't look right with the guy in the OP's video because he's so hunched and his head is almost directly over his hands. I've never even found it weird that people look at the fretboard until I saw this David MeShow guy. I never paid it any attention either, but looking at my favourite guitarists playing, seems like all of them do it.

Paul Gilbert looks at his hands:

Godthrie Govan was looking at his hands while playing the loop stuff (moving around the fretboard) but when he was doing the long legato run (staying in relatively the same position) , he didn't need to :

I think you can definitely get away with not looking with the easy stuff. Once you get to playing stuff on that level ^(see vids) then you don't really have a choice.

No its bad practice.

It becomes obvious when you stand up and play. You cant see the fretboard when you are standing up. It gets awkward if you rely on direct sight to figure out your position on the fretboard.

If you only play sitting down though its not that big a problem.

3
Looking at the fretboard is ruining my stage presence

18
Right hand accuracy
8
Left hand position for high fretting (electric guitar)
5
Floyd Rose string tension and action question
1
Tips for beginner guitar technique
2
It's really hard to press my acoustic guitar strings and I can't figure out why
2
Should my fret be buzzing on my recently bought guitar?
13
I cannot spread my fingers easily. Am I anatomically disadvantaged for playing the guitar?
17
Importance of using all fingers while playing guitar
5
Is it optimal to have the root of your index finger touch the guitar neck?
3
Best position for play Power Chords standing