What does the notation “2/3BII” mean?

What does the note "2/3BII" mean here? The notation below is a part of the piece "Canon in D", arranged in classical guitar.

This piece is arranged by Allan Alexander. Here is his explanation.

That is two thirds of a bar (4 strings) on the second fret. sometimes it's notated 2/3 CII. B for Bar, II for second fret. 2/3 for 4 strings. It's better than doing a full bar all the time.

It's a two thirds (top 4 strings) barre on the second fret. There are a few different ways of indicating a barre in guitar sheet music: 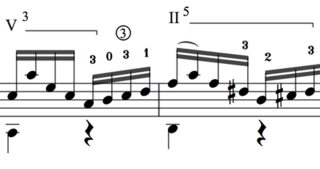 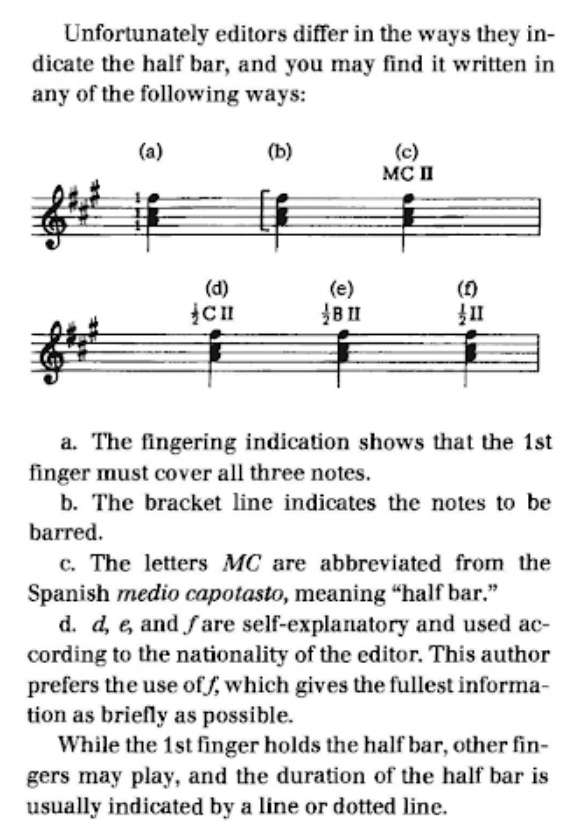 I think it means a partial barre at the second fret, where it's only important that strings 2 and 3 are held by the first-finger barre.

I don't recall seeing this notation before. It would more commonly be written as "1/2 CII" (half-barre at fret 2), where 'C' stands for the Italian word capotasto, usually abbreviated capo (/kay-po/). The chord being play is F♯-minor.

If we look at the score the guitar 6th string is lowered down a whole tone to D which brings the 6th string F# to the fourth fret.

Now lets go ahead and play the first measure which doesnt pose any reading challenges. So does the 2nd measure.. Playing wise it should not pose a problem at all BUT what is written above (2/3 B11) is not really a great way of writing music. Actually notation should be easy on the reader. to move ahead Let play the Bminor arpeggio while barring the 2nd fret with the fingerings mentioned .. without moving the barre the 3rd finger moves to the F# on the 6th string as the 2nd finger is lifted to make way for the C# to give us a F# minor chord.. According to my understanding I think whatever is written is a guide to the left hand 2nd and 3rd finger movement while retaining the barre.

This could refer to blocking in a musical theatre composition. (Blocking is the act of placing and moving performers on stage so that the director achieves the desired look and feel of that scene.)

It would be more helpful if you could show some extra context to your note. You include "..." to which I'm assuming means there is more text.

Ah ha! It's a reference to a B11 Chord. As guitar is not one of my main instruments, I am going to propose a couple ideas. Likely, it means a slide - while playing the chord, slide your finger on the second fret to the third. It could also mean use fingers 2 and 3 (see this handy B11 Chord reference). A third possibility is to play the B11 chord using the second and third of the scale - C# and D#, though normally you would say "add 2" if you wanted to add the second, depending on the chord.

If another person who knows guitar better than myself could improve on this answer, I'm all ears. :)

6
What is B II, followed by a dashed line, and what does it mean?

18
What did ancient cuneiform notation look like, and how did it work?
11
What does a mordent written to the left of a note mean?
8
What does this notation mean? It is two numbers in brackets
7
How does one know if a score is notated well?
7
Notation precedent for alternative ending when playing movement as standalone piece?
5
What do these notation marks mean?
2
What is notation for holding a note full value?
9
Meaning of notation in violin part
0
Notation for bowed instrument to play chord from high to low