Origin of the asymmetrical keyboard layout of a piano

The piano keyboard has white keys based on the C Diatonic scale plus black keys, which add the remaining notes used in western music.

The asymmetrical way in which the black and white keys are placed makes it hard to transpose music and learn scales, since the same scale has a different layout when played in a different musical key.

What's the cause/history of the asymmetrical layout of the piano keyboard?

Some websites state that the reason is Gregorian music since they only used their modes (which only included pitches from the modern C diatonic scale) and then the black keys were added. However I haven't found a reliable source confirming it.

Wikipedia mentions the Gregorian Chant influence of early keyboards but doesn't get into details on how/why they evolved to the modern piano layout:

The earliest designs of keyboards were based heavily on the notes used in Gregorian chant (the seven diatonic notes plus B-flat) and as such would often include B♭ and B♮ both as diatonic "white notes," with the B♮ at the leftmost side of the keyboard and the B♭ at the rightmost.

Going back to antiquity, things always evolve the way they do because over the centuries people find it the most practical and popular method. Elucidating "why" is a murky question at best.

The keyboard first evolved to play arrays of church bells. The "keys" were large heavy foot- and hand-operated levers that triggered ropes that rang bells, and required the performer to throw their body weight onto each lever. It was not possible to damp each bell, or to restrict the length of the sounding of each note; each bell continued to ring out after it was struck. The bells would be arranged and tuned to play very simple melodies in modes and scales with few notes, where the ringing overtones of the bells would not clash with each other too much. Chromaticism was avoided; the overtone series of the lowest bell and the root pitch produced the purest scale with the least clashing overtones.

Later, the first primitive pipe organs were invented, and they began to include keyboards that could be operated by the fingers, which only had to be strong enough to open and close the valves of compressed air going to the pipes (the compressed air was supplied by someone other than the keyboardist who was pumping an air bellows.) This means that the keyboardist could control not only the starting of each note, but the point at which it stopped as well.

It's fair to say that the first keyboards on the first organs, in Western civilization, which were certainly rare, expensive and sophisticated mechanical devices for their day, were built to accompany singers who were singing Gregorian chants or melodies of similar structure. These melodies adhere to a certain very strict "mode" or scale and do not involve chromaticism or modulation. They also do not involve harmony or chords at all. So the pipes would be built and tuned to play only the notes needed for this kind of very simple music that was deliberately restricted in its scope. (At the start, extra pipes tuned to chromatic pitches would expand the cost and reduce the reliability of such an expensive and delicate instrument, so doubtless they were avoided.) Regardless of the master tuning-fork pitch to which they were all tuned, with the simple Gregorian chants, the starting note would be "A" and the most common mode would be the A-minor scale, so that gives us the "white" notes.

As Western music composition and theory gradually became more sophisticated, and melodies were composed which were more elaborate, extra pitches would be required, not only on the organ keyboard, but on other musical instruments with fingerings, such as woodwinds, and stringed instruments with frets. I would imagine that successive generations of pipe organs were built which gradually incorporated additional chromatic pitches one by one. I doubt that the modern keyboard layout of 12 pitches to the octave appeared overnight. But the point is that as additional pitches were added that were between the established 7 pitches of the natural minor scale, the logical place to put the extra keys seems to have been physically locating each new key between the two keys representing the pitches tuned immediately below and above the newly introduced pitch. Placing them higher in elevation and further back, and using a smaller key, seemed to work well for keyboardists concentrating on playing the "white" keys. It just slowly evolved that way.

It is worth noting that keyboardists did not use all ten fingers in playing the keyboard until comparatively recently! The innovation of using the thumbs was popularized by none other than J. S. Bach (1685-1750) and by that time keyboards had already standardized on the physical size and layout of keys that we see on pianos today. Before Bach, most keyboardists used only the first three fingers of each hand: six fingers, not all ten. Therefore it seems that what has come to be the standard keyboard layout that we see today must have evolved with playing with only those six fingers in mind. But Bach found that he could play scales, chord progressions, and all musical passages with all ten fingers on the keyboard he already had, and that this was a great advantage.

It is worth noting that in the Renaissance and Baroque periods there were certainly keyboards for pipe organs and for percussion instruments like the harpsichord and clavicord that had more than 12 keys and pitches per octave -- in some cases far more. There are still pipe organs being built today which are replicas of Baroque instruments and that have a somewhat standard (for the era) layout of 15 pitches and keys per octave, used for playing Baroque music in meantone tuning. It sounds crazy to us today, but they exist. 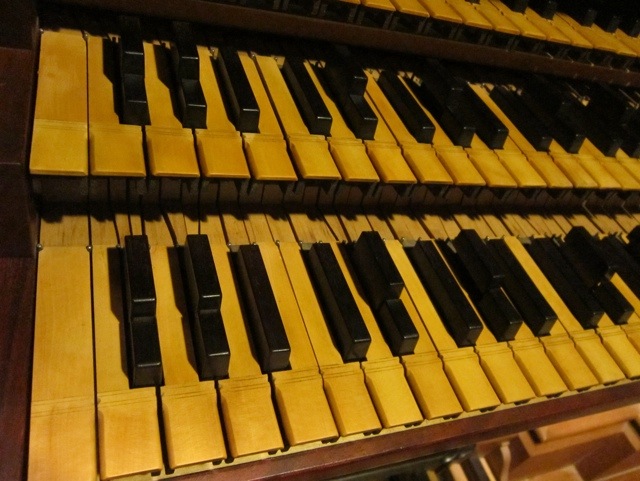 15-key "split key" organ keyboard for playing in Baroque meantone tuning. This is from a working organ in Boston, Massachusetts, USA

According to "Tuning In" by Scott R. Wilkinson (p. 39), "On February 23, 1361, Nicholas Faber completed the construction of an organ for the cathedral in the Saxon city of Halberstadt... this was the first appearance of what was to become the modern keyboard." This keyboard had 3 manuals, the third consisting of nine front keys and five raised rear keys in groups of two and three. Praetorius drew a diagram of it in his book Syntagma Musicum, 1619. So this would be even earlier than the keyboard cited above in 1380.

According to Nicolas Meeùs in his article "Keyboard" in Grove Music Online http://www.oxfordmusiconline.com/subscriber/article/grove/music/14944 (an authoritative source) the first known asymmetrical keyboard dates to c1380, being the Manual keyboard of the positive organ from Norrlanda. A picture and article describing a similar organ from the same period (in Swedish) can be found at http://www.historiska.se/historia/manadensforemal/2004/mfjuli04/.

Apparently the chromatic keys were not for enabling transpositions but were used to enable the playing of perfect or virtually perfect 3rds in polyphony. This led to their being placed at a different level.

The need to transpose and play in different keys did not arise until later, by which time the chromatic keys (initially tuned to pure harmonic thirds) were already established.

I guess it is just a consequence of the mechanics. The wooden levers reaching into the piano are pretty much equally spaced in order to have similar stability. The black keys are elevated, so if they were considerably displaced sideways from their bearings, they'd get stuck easier when getting twisted. The wider white keys are not elevated but on the same plane as their bearings and can be easier stabilized additionally underneath I think.

So the piano layout is more or less what you get by first placing the black keys (and actually the white stubs between the black keys) "properly" according to their position in the twelve-tone scale, then putting the white keys in spaced properly according to their position in the seven-tone scale, and then aligning both in the nicest manner. It's basically an equispaced twelve-pattern (corresponding to the levers, and the black keys and white stubs affixed to them) against an equispaced seven-pattern (corresponding to the front arrangement of the white keys). That's as logical as it gets.

Oh, and if the question is why add a diatonic white scale at all to the front: it corresponds well to Western scales and notation. There are instruments that forego this connection, like chromatic button accordions. Transposing is a breeze using them. But playing sheet music on-sight is already about half as hard as transposing on-sight with a piano keyboard would be, and how many people do you know who can do that?

This old book explains many topics of harmony and symmetries of the keyboard:

RHODES, Alfred. "Curiosities of the key-board and the staff, or The staff notation shown to be upon a scientific basis according to the law of radiation from fixed centres, which underlie the construction of the key-board, harmony, and modulation".

Not the answer you're looking for? Browse other questions tagged piano keyboard history or ask your own question.

5
When we talk about an 88/76/etc Key piano, does that include all keys or just white notes?
3
Alternate keyboard input methods for a digital touchscreen piano?
1
Virtual Piano black keys offset
3
Black keys issues on keyboard
3
Why do keyboards have the current configuration, based on Do scale?
12
Unusual keyboard in a picture
2
The first asymmetrical layout keyboard