Is the notation "16va" or "16vb" ever used to mean to transpose what is written up or down two octaves? I cannot think of how else you would represent the highest and lowest notes on a piano without using excessive ledger lines, but I have never seen it written that way. Can you think of any pieces that use those parts of the piano's range? Do you know how that sheet music is written down?

First off 2 octaves above or below is a 15th because an octave is 7 letter named notes above a unison (P1) so to get the first octave you have 1 + 7 = 8. 7 more notes above that is the next octave so 8 + 7 = 15. However it is very rare because as you inferred, it is rare that a pianist will play that high up and also it is much easier to understand just the 8va or 8vb than 15ma or 15mb. Also from a practical standpoint the grand staff can comfortably fit 5 octaves from C2 to C6 which is equivalent to 60 keys on the piano. If you introduce notation for an octave above or octave below, you now cover 7 octaves from C1 to C7 which is equivalent to 84 keys. Since the normal max for a piano is 88 keys, you can see that having 8va or 8vb gives you access to pretty much every note within two ledger lines of the grand staff.

The notation does exist, and you may see it when you have a part that repeats itself multiple times, each time an octave higher. I personally have never seen any song with that notion, but it does exist. 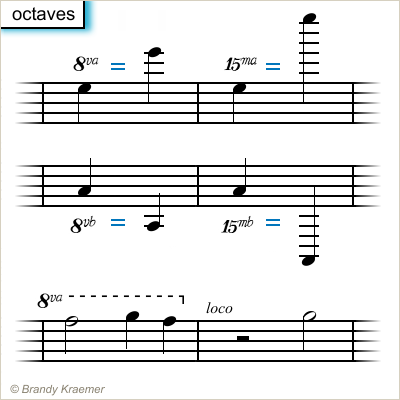 The double-octave transposition notation is indeed used in many kinds of classical and contemporary music. (The piano is only as big as it is to begin with because composers kept pushing the boundaries.)

Your idea is very close, but incorrect. The notation is actually 15ma or 15mb, because the number in question refers to the size of the interval.

In doing further research about the terminology, I came across this post on the ABRSM forums:

Hello,
This is one of my favorite topics. The term 8va is an abbreviation for the Italian word 'ottava' which means octave or 8th. The term 15ma (NOT 15va) is the abbreviation for the Italian word 'quindicessima' or 15th. 8va and 15ma may be used above notes in the treble clef to mean one octave (8va) or two octaves (15ma) higher than printed or below the bass clef to mean one octave or two octaves lower than printed, respectively.

The term 16va was used at one time in some printed music but is incorrect and should not be used. Neither of these terms should ever be used in any other situation, i.e. below notes written in treble clef, above notes written in bass clef, or in connection with any other clef, ex. alto, or tenor, etc.

The term 8vb is not strictly accurate but has come into use recently to mean ottava bassa, one octave lower. It is really redundant and meaningless because 8va already means one octave lower when used in its proper setting below bass clef.

I hope this clarifies things.

This actually clears up some confusion I've had for a few years after seeing an 8va used on a bass clef to mean "down an octave". It seems in actuality the basso addition is relatively recent in the grand scheme of things, and so our current usage of these terms will not necessarily be consistent with older printings of music.

I feel like I should mention how one of the other answers has a picture saying 15ma and 15mb, but 15va and 15vb work too. Here's another picture (look at the last measure): 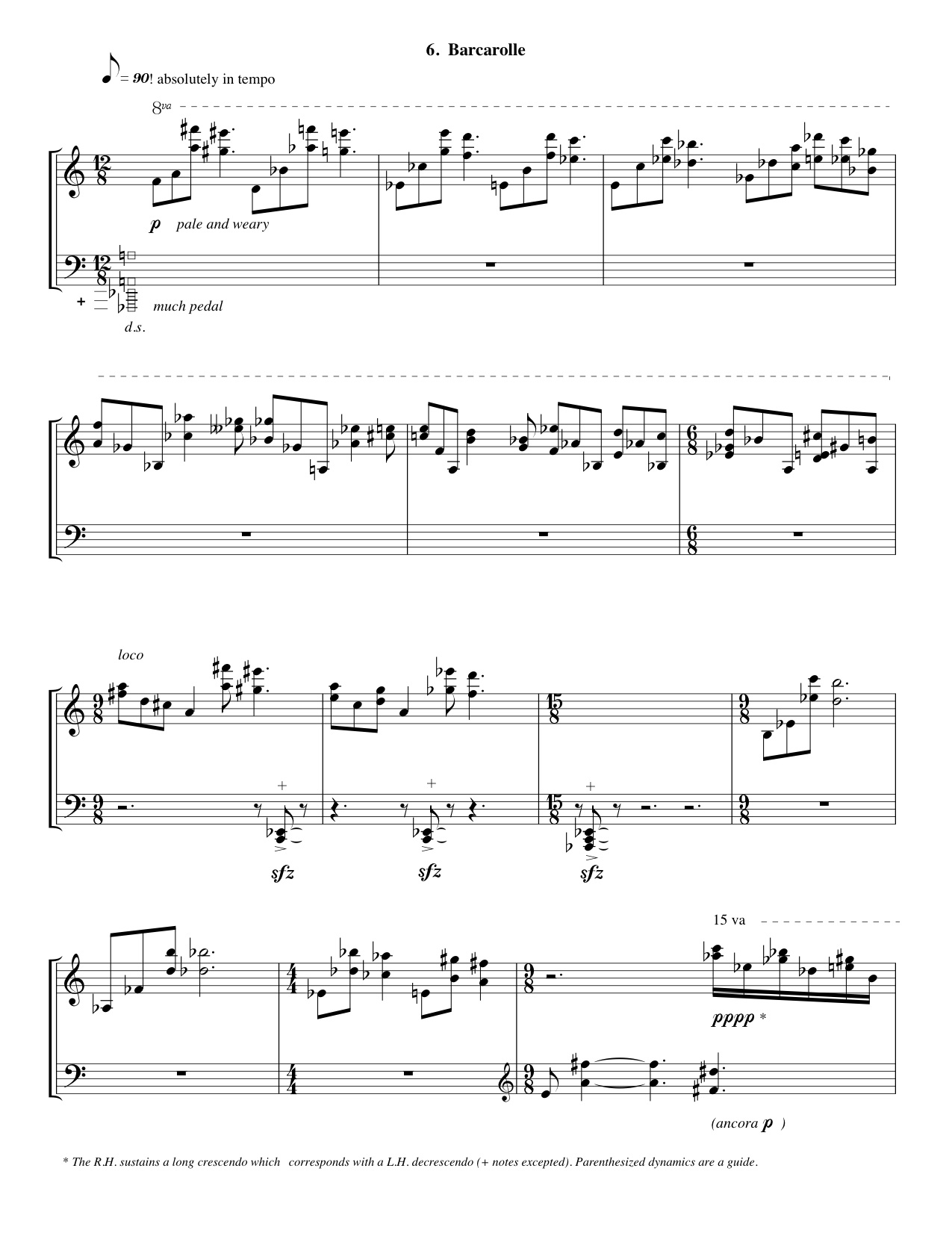 So here, they use 15va, but if 15ma is also accepted, then that would be correct too. It's probably a different dialect or language like decrescendo and diminuendo.

I've edited again and added a critique near the bottom of this answer:

I figured that since I wrote this comment as an answer that I would give an answer as well.

As you have probably already seen from the many responses, there are seven pitches in the diatonic scale. This has historically led to the current way of writing music. For example, accidentals are not given their own line or space on the staff. So, the 8 in 8va is referring to the next octave up in this scale.

To answer your question, you would use 15ma notation to signify two octaves. It's as simple as that. Two octaves up would be 14 pitches away from the current pitch in the diatonic scale. This would then be the 15th note if you count the referenced note. This notation is still very much relevant because it is based on a scale that has been adopted by much of the English speaking regions.

There are music pieces that use such pitches and notations. At the moment, I don't feel like looking up specific music scores, but I think you got the idea by now.

In defense of Dolores, intervals in pitch can be described by frequency. Musicians may not talk about it this way but that's because they're not usually scientifically minded. If you have two notes where the frequency of the one is doubled the other, they are an octave apart. Look at any technical discussion of music pitch.

In fact, a musical tone is a steady periodic sound. Two notes sound good together if the ratio of their frequency is a nice whole number. For example, this is why unisons and octaves sound so good to the human ear. People tend to sing at the same pitch when they sing together. Well, it at least sounds better if they do. Unisons have a 1 to 1 relationship in the frequencies of the notes. They are the same pitch. Octaves have a 2 to 1 ratio of the frequencies of the notes. One note's frequency is doubled the other, for example.

There is a lot of merit to understanding the role that frequencies have in music. It shows that you have a deeper understanding of music.

To critique Dolores, I don't agree that we need to have another way of reading and writing music that reflects the chromatic scale. In fact, the current way of writing music does include the semitones. The current system is simpler because you don't need to add extra lines and spaces for the semitones. You can still represent these pitches using the accidental symbols. No need to "update' this way of writing music and make people memorize ever changing stories of good boys deserving fudge and animals eating something or other to reflect the 12 equal subdivisions. If you just remember that the intervals of pitch are not the same in the diatonic scale, you will be fine. This is where the name diatonic comes from after all.

As far as writing systems to reflect current scientific understanding of sound waves. I don't think this is necessary either and will complicate reading and writing music. You can appreciate the fact that a note that is an octave higher has double the frequency now. This doesn't mean we need to write out music scores using scientific units of frequency.

The answers above are excellent explanations of the historical origin and use of the 15ma symbol. It is also important to recognize that the musical language is ever-evolving. An effective symbolic language is most widely useful when it incorporates self-explanatory efficiency. The meaning of 16va/16vb is implicitly understood by anyone familiar with 8va or 8vb. The quindicesema (15ma), like the minim, crotchet, semibreve, and hemidemisemiquaver, is an example of enduring, premodern music terminology.

In jazz harmony, the intervallic series reaches its functional endpoint with the 13th (octave+6th). The intervals of the 9th, 11th and 13th are useful for representing extended triadic chord voicings of the 2nd, 4th and 6th, beyond the octave (root). Within this harmonic context, the interval series is a repeating sequence of: 1, 3, 5, 7, 9, 11, 13; 1, 3, 5... In this modal system, the double octave would be a 15th, but musicians do not use this intervallic value because it is a simple repetition of the octave, just as we don’t refer the interval of an 8th.

15ma is an archaic symbol not commonly understood even by trained musicians. Its reference is not based on modern associations between musical octaves (2:1; 8x2=16) and octave frequency relationships (f, 2f, 4f), but rather a more esoteric concept of the quindicesima (the 15th value in a simple number sequence).

Another example of evolving musical language comes from the practice of microtonality. The historical use of ET (equal temperament), say 36-ET, is less self-explanatory and therefore less efficient as a symbol than 36-EDO (equal divisions of the octave).

In response to Dom's comment: The concept of ‘interval’, as described in traditional music theory, retains within its framework a (prechromatic) concept of modal intervals. Within this modal system an octave is represented in intervallic numbers 1, 8, 15 (n+7). Chromatic intervals were added later, through the use of accidentals (b9/#9, #11, b13), for notating the additional intervals without updating the antiquated modal framework.

16va is a representation of a repeating and doubling relationship inherent to the octave as measured in frequency (100, 200, 400 hz). This octave doubling (2:1 ratio) is also the basis of the logarithmic measurement of intervals in cents: octave = 1200 cents; double octave = 2400 cents.

The octave, as an acoustical (physics) relationship, and as explored within audiology (perceptual) and psychophysics (cognitive/psychological), is based on scientific, quantitative principles of the octave - defining it as a doubling/halving of frequency (1f, 2f, 4f).

My arguments examine the incongruity between a prechromatic, modal music symbol (15ma) and modern systems of representing the octave. Besides an implicit, self-explanatory clarity, the musical symbology of 8va and 16va express a congruity between music theory and our scientific understanding of the octave as a repeating, doubling phenomenon.

It is important to remember that the cents system of interval measurement is logarithmic (exponential), not linear. The basis of both the frequency and the cents measurement is a 2:1 octave relationship. Because pitch measurement systems (linear and logarithmic) are derived from the octave as 2:1, a double octave represented as 16va (16:8 = 2:1) is a notation evolution surpassing music theory symbols based on an outdated, extended modal scale series, like 15ma. In this way, the tradition of describing an octave as '8' (as in 8va) remains, while also integrating the octave's recurring 2:1 relationship into music notation as the double octave transposition symbol (16va).

However, the underlying problem remains: of the need to update an antiquated modal framework, both for the chromatic systems of the present and the micro-pitch (meta chromatic; non chromatic) music systems of the future.

12
Is there a highest note representable on sheet music without using an octave higher notation?
23
Why don't we measure the size of intervals starting from zero?
5
Very high notes on the treble clef

14
How does the piano middle pedal work? Is there a standard symbol for it?
14
Why is it common to write tuba sheet music in concert pitch?
3
Notating Original Songs for Musicians
7
Question about reading music sheets
8
What does a pair of long horizontal lines between two whole notes mean?
0
Notating a melody over a free-flowing arpeggio
4
How to interpret trills in renaissance music?
2
Timpani & Conga: Doit, Fall or is it something else and how is it performed?
4
Problems reading sheet music with visual disability
5
In a piece for piano and vocals, when I move the vocal part down an octave do I also need to move the piano part down an octave?