I currently have a electric drum set 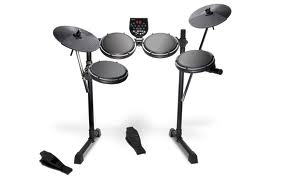 for electronic kits, the manufacturers generally concentrate on providing sensors for the drum skin, not so much the rim of the drum.

There are exceptions though. I have a Roland TD8 kit, the snare of which which has an extra sensor around the rim. It can be set separately from the drum skin, so that hitting the rim provides either side-stick, more snare (or any sound you like), or a rimshot (snare skin and rim hit at same time - it can work out when that happens).

To be honest all the side-stick "simulation" does is play a sidestick sound when you hit the rim. It doesn't to anything more versatile.

The TD8 is a bit old now (2004?) and there's every chance more modern kits will have this, but it depends what you buy. Basically you need a pad with a sensor around the rim, and the electronic brain where you program the sounds needs to be able to work out what you're hitting and what you want to happen. It's a common thing to want to do, so I'd think it's covered quite well nowadays.

The alternative is that most (all? ) electronic will have a side-stick sound which you can allocate to a pad, so you can do this but have to lose a dedicated pad to it.

Not the answer you're looking for? Browse other questions tagged technique drums or ask your own question.

8
What do I need to know about drums as an electric metal guitar player
9
What are the challenges I might face when I switch from electronic drum-kit (Yamaha DD65) to an acoustic drum-set?
4
Maximize practice time on electronic drum kit
3
How to improve Left Hand Discipline when drumming (right Handedly)
4
Why is it difficult to switch over from acoustic to electric guitar?
4
Side effects of power chords
3
Drums in Apartment
0
What would be good ways, preferably books, to practice dynamics on drums
2
How to play dynamics marks on drums / snare
2
The number of notes drums have