Which tones or sounds can be made with a cajon?

When playing the cajon, I know that the sound of the snare can be obtained by hitting the upper left and right corners of the cajon using the fingers and moving the wrist only.

The sound of the bass is found by hitting about the middle of the cajon with the palms and moving the entire arm. 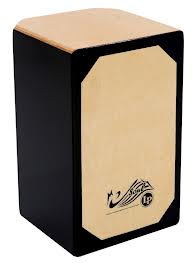 Is it possible to get other notes of the drum beside the ones mentioned above e.g. closed hi-hat, open hi-hat, ride cymbal or crash cymbal?

I used to play the cajon a lot with brushes, this way I could get a hi-hat, kick and snare sound. When hitting the snare and kick sounds while holding brushes you have to hit with the stick part of the brush to get a fuller sound especially when playing without mic. And the hi-hat sound comes natural from the brushes hitting the box.

Without brushes I find it harder, I've seen people screw one of the top corner sides loose so that you get a different snare sound on one side, more like a rimshot, I have used this but never really stuck with. It also really depends on the string inside the box how this will work out for you, might just have to try it.

Another thing you can do with the sound is put one foot against the front and push against the box and slowly release pressure, this pitches the sound of the entire cajon, would experiment with this to see how it feels / works for you personally.

That being said, the cajon has its roots with people who had to invent instruments which they could disguise cause they were not allowed to play music. I would imagine it took them quite some experimenting and creativity to find/create this instrument. Don't think there is a right or wrong way with a cajon if it sounds good.

You've nailed down the two features a cajon has - snare and kick. Those are what the cajon is built for, and out of the box (...) it's not going to do anything else specifically.

Of course, feel free to experiment on them by tapping edges, using brushes etc to get different sounds, but they are built to do a kick and snare. You're not going to get crash or rides out of it. After all, they are just wooden boxes with various things inside them to produce the effect of a snare drum.

I have been working the cajon for the past 10 years or so on gigs from jazz to flamenco. The use of the Vater Blue Brushes are very effective in creative performance. Add the foot Afrushe-cabasa on one free foot, a bass foot pedal on the other and hand held castanets for Kata Palo Ceco patterns on the cajon's rim and see what happens.

Not the answer you're looking for? Browse other questions tagged technique practice drums cajon or ask your own question.

55
Is there a “standard” or “typical” drum kit layout?
16
What can I do about my problems with piano scales which manifest in just one direction?
5
Technique or exercise to play this part from a song which i'm stuck with
10
How do i differentiate a crash cymbal from a ride cymbal which looks so similar
4
What can I do if I want to work the kick pedal on Bass Drum with my heel?
2
How can I find a room suitable for writing, recording and rehearsing with a band?
4
How can you attain rich tones on a violin?
1
Can a Big Muff Pi With Tone Wicker maintain middle tones and be the only fuzz/distortion pedal on a board?
2
In double kick playing, which foot should match with snare?