Where are the bow, bell, and rim on a ride cymbal?

Hitting a ride cymbal on the bow, bell (dome/cup), and rim will produce different sounds. 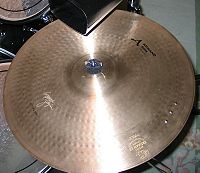 Where exactly are the bow, bell, and rim on the RC, and when are they typically played?

I made a diagram for you, showing the bell, the bow, and the rim. 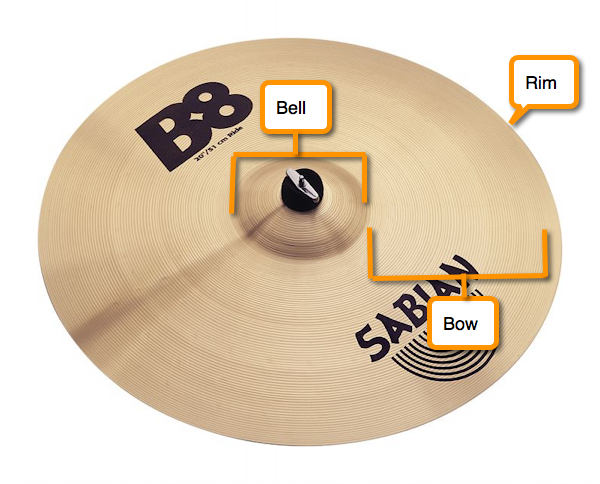 Wheat Williams has an excellent diagram for where the Bell, Bow, and Rim are.

As for how/when they are typically played I will attempt to give some insight.

Let's start with the bell: The bell is sort of isolated from the bow of the cymbal, in fact it's purpose is to isolate the vibrations in the bow of the cymbal from the stationary mounting point, giving it better sustain. As such the bell is like a little ... well... bell in the middle of the cymbal. Hitting it usually produces high-pitched, shorter sustain tones than the rest of the cymbal. The tones are also very clean, with a narrow frequency bandwidth and fewer overtones. You'll find drummers doing this, generally with the shoulder of the stick (but sometimes with the bead as well), to produce accenting notes in Rock or Latin music. In rock you'll find it when drummers need a piercing Ting! Ting! Ting! Ting! type pounding beat maybe in a chorus or something. In Latin or Jazz music you'll usually find these bell hits interspersed with hits on the bow from the bead of the stick to maybe produce tah-tah-Ting tah-tah-Ting type oscillatory rhythms.

The bow: The bow of the cymbal is the bread and butter of your cymbal. You can drive on it with the bead of the stick for that classic jazz ride sound, you can thwack it with the shoulder of the stick to open it up and make big, crashing, gong like notes. This is also where you'll play doing a cymbal roll. With the bead of the stick, the bow will make a wetter, lower pitch, quieter ting than hitting the bell with the shoulder. The vibrations in the bow of the cymbal are more complex and less damped than the vibrations in the bell, producing a wide, dark, frequency bandwidth and sustained wash after the ting. But a thicker cymbal usually won't open up just from bead-on-bow, so the tings are still distinguishable. Sometimes shoulder-on-bow isn't enough to open up a thick cymbal either, but the thinner rides preferred by jazz drummers usually open very nicely with a good thwack. This then provides an easy transition from a driving ride beat to an accenting crash without really moving the stick at all, just moving your wrist a little lower. This is not at all uncommon in be-bob or modern jazz drumming.

The rim: I generally think of the rim as the "open up now please" button. It's the furthest from the center, it has the most extreme vibrations and displacement, so it's where you'll usually get the most excitation of low-frequency harmonics with minimal input. You can hit the rim on a ride cymbal but it's pretty uncommon as the bow is usually pretty well... bowed or curved downward. Ride cymbals also tend to be mounted lower to facilitate bead-on-bow playing. These just make hitting the rim less accessible but not necessarily impossible. So playing shoulder-on-rim is more typical on crash or hi-hat cymbals and isn't necessarily common on ride cymbals. If you do, however, you'll get a note similar to hitting shoulder-to-bow with enough energy to open it up, but with a rounder, less thwack-y attack. Sometimes this is desirable, like if you're trying to play a roll on a ride cymbal, playing as close to the rim as possible will give you the smoothest, most unified sounding tone since it minimizes the individual mallet hits. But other times, like when I go to hit the bow and accidentally hit the rim, it comes across as dull and lacking impact, so I generally try to avoid it.

Not the answer you're looking for? Browse other questions tagged drums drum-kits ride-cymbal or ask your own question.

21
How to reliably execute a snare drum rimshot?
8
Repairing cymbals?
12
Which tones or sounds can be made with a cajon?
10
How do i differentiate a crash cymbal from a ride cymbal which looks so similar
5
What are some good ways to practice rim shots?
4
How to change all hihats to ride cymbal in GuitarPro
15
Difference between a ride and a crash/ride cymbal
0
Adding cristality to ride and hats