I'm trying to understand why Erik Satie put chords impossible to play with the right hand up in the treble clef. Why not put these chords in the bass clef so that it is obvious that they are played with the left hand?

Advanced pianists don't see the bass clef as meaning left hand and the treble as meaning right. The chief consideration for which clef to put a note in is readability, and notes on ledger lines are usually harder to read. So, if the left hand is playing many notes above treble F or thereabouts in a passage (while the right hand is playing higher stuff along with it), the lower clef will switch to treble for a while. Furthermore, there are plenty of cases where stuff in the upper clef gets played with the left hand, and vice versa.

The overriding rule is to use the hand which gets the job done, period.

To illustrate this, here's a snippet from Copland's Piano Variations:

This piece is characterized by a lot of leaping around the piano, and often resorts to using three staves (and even four in a couple of places). Here, you'll notice that the middle staff moves from bass to treble in the fourth bar. You'll also notice the "l. h." under the D# in the first bar, partly because it's easier to play, and partly because Copland wants to emphasize the slur between that note and the upcoming C# an octave higher. This emphasizes a contrast between the notes in the top staff and those in the bottom two.

Of course, he could have written all this in two staves, but putting it in three clarifies the voicing that he wanted, making the middle voice stand out better.

Now, Satie is kind of unique as a composer, probably the only composer that was also a musical humorist. So, although I can't think of any offhand, there are probably places in Satie's music where his note placements were some sort of joke. To get some idea of Satie's attitude towards music, have a look at this parody of the "three wise monkeys": 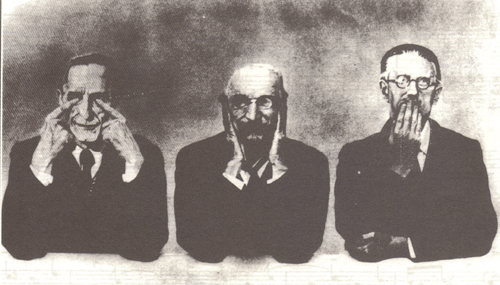 Satie is in the middle. The other people in the picture are the artist Marcel Duchamp and the writer James Joyce. I feel pretty sure that it was Satie who put the others up to it!

Satie constantly satirized the self-important and sentimental musical conventions of Romantic music. For a fine example, see Embryons desséchés - "Dried Embryos". This is a collection of three pieces entitled d'Holothurie (Of a Holothurian, or sea cucumber), d'Edriophthalma (A disused order including things as diverse as freshwater shrimp and woodlice), and de Podophthalma (the stalk-eyed Crustaceans, including lobsters, crabs and prawns). Not exactly "To a Wild Rose" or "At an Old Trysting-Place"! The ridiculously bombastic and superficial cadenza tacked on to the end of de Podophthalma is notated Cadence obligée (de l'Auteur), or "Obligatory cadenza (by the Author)".

The writing says "I haven't any tobacco, fortunately I don't smoke"! Typical.