What does a single square bracket next to a single note mean?

I just stumbled on a bit of notation in a music score, and I'm stumped as to what it means. It's a single square bracket, spanning the whole staff, to the left of a single note.

This is measure 58 of Fandango, by Padre Antonio Soler, arr. Fernand Vera, for guitar duo. The piece is in D minor. 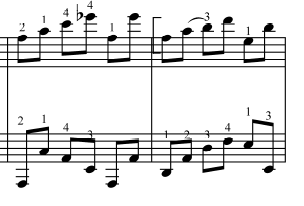 What does the bracket mean?

Must simply be notation for a barre across the fourth fret, as this would also be for the subsequent G#. Admittedly, this is not the most conventional notation, but it is certainly valid.

EDIT: this kind of bracket is commonly used in bowed string (eg. violin) music, to denote double-stopped notes, which may sometimes be with the same finger, and so are an equivalent of barres. (Here, of course, the notes aren't played together though - thanks for pointing this out @Alexander Troup.)

1
Is there a way to notate alternative transitions between 2 sections of music?
13
Do some measures get no numbers, in an opera score?
4
Square bracket next to two notes
5
Is it wrong to alter bar numbers after repeat endings so they reflect the performance progression rather than the last repeated measure +1?
5
What is this square bracket between staves?
14
Is there a term for the practice of omitting staves for the measures that have no music in an orchestral score?
1
What does this number 3 next to the note mean?
3
What does this bracket mean in violin music sheet?
4
The proper way to mark sustain pedal for MuseScore playback and live performer?
6
arpeggiated chord and half bracket symbol - what does it mean? (piano)