What does the tie across other different notes mean?

There are two ties in the bass part of the following excerpt for a Drop D guitar part. Both of them include some other different notes. According to the tie's definition, 16th note + 8th note = 3/16th note.

In the case of the first tie, should I play a 3/16th note at the beginning of the second measure, or shall I play a whole 3/8th note?

[EDIT] A correct way of writing this:

[EDIT] Another way, for guitar, etc.:

This is something that I generally wouldn't write myself when typesetting or editing a piece of music, but is nonetheless an acceptable notation for piano music involving arpeggios.

You interpret it simply by ignoring the notated value of the first note except to figure out where the next note in the arpeggio should be. Just hold the note through the duration of the tie, playing the arpeggiated chord above it as written.

There seems to be some disagreement over the acceptability of this notation. Like I said, personally I would opt instead for something like what Beethoven does on the second-to-last page of the Moonlight Sonata), but in spite of the voice-rhythm inconsistency, the notion of tying an arpeggio to a chord is an accepted practice for chording instruments like piano, guitar, and harp.

They are known as Ravel ties, and you will see questions about them crop up often in community forums for notation programs like Sibelius and Finale, since they are generally not played back properly (in current versions of the software) without some extra tweaking. Lilypond, however, even goes so far as to include the example in their documentation, and I'm certainly not going to argue with the wonderful engraving nerds that run that project!

Some real-world examples can be found all over Ravel's own Gaspard de la Nuit, alongside similar usage for grace-notes (possibly a more "readily accepted" usage), in the first and third movements in particular: 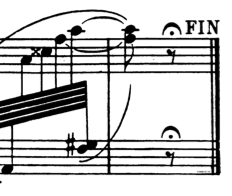 Not the answer you're looking for? Browse other questions tagged guitar notation sheet-music rhythm or ask your own question.

8
Why is it so hard to count beats and play at the same time?
3
Confusing rhythms/tuplets in Le Sacre du Printemps?
3
When to use tied notes vs. an unconnected “laissez vibrer” (l.v.) tie?
5
Do note lengths matter when they have l.v. ties?
6
What do three bars across the stem of a note mean?
4
Issue with notes going over the time signature
3
Why do notes not add up to the bar in this example by Couperin?
4
What does a B on a note stem in guitar music mean?